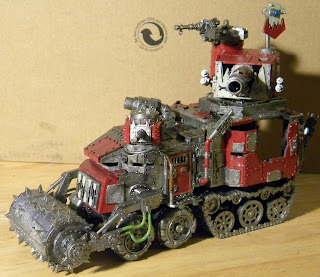 This weekend Fantasy Books and Games  are having their typical first Saturday  of the month 40K tournament.  I have not gone for a couple months (family obligations came up) I plan on going this week.  I decided to bring out da boyz!!!

That’s right I will be bring the orks out to fight all the nasty cheesy Grey Knight crap that will be on the field.  I plan to get massacred by purifiers and deathcult assassins but I will have a good time doing it.
Right now I have a list that does not include the new planes but if I can get one and have it built in time for the game I will make room for one  >_<
Here is what I plan to bring:

So the plan is add the Warboss to the shoota boyz, and the Big Mek with the 19 boyz.  Then the small squad of boyz  get into the wagons with planks and the burnas in the last one.   I will keep my buggies close to the wagons to get the KKF cover and then boost out and shoot at light armor.

The Deffkoptas are suicide guys if I get first turn I can turbo-boost them  into position hopefully get a side shot with the rokkit and then charge with the buzzsaw.  Some S7 power klaw attacks should be able to pop some tanks open.

I am going to give the lootas another try.  They never seem to do much for me but I guys swear by them.  The Burnas are also a new unit in my army.  I want to give them a try.  I figure if they can get their template over some juicy marines, at least some of the wounds could get through.

We shall see.  The one thing is certain is I will have fun.  Recently the shop has been invaded by some WAAC players with their grey knight netlists.  I find it hard to enjoy the game against these types of players.  I just need to take a deep breath and remember it is a game.

We orks like to fight so, if we get to fight, we win!

WWWWWWWAAAAAAAAAAGGGGGGHHHHHHHHHHH!!!!!!!!
Posted by Grenn Dal at 11:17 AM