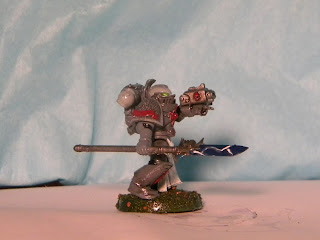 
Since it was just a fun game and a good portion (over 50%) of my models are not yet painted I didn't record the battle.  Sorry. I will give you some ideas on what went down and my over all feelings on my army.

First observation is stay away from Thousand Sons. the AP 3 bolter is just wrong when you only have a 5 man squad.

I don't care how many force weapons you got when you only have 1 attack and WS 4 you are not going to kill a lot of guys.

although combat squading did allow my army to cover more ground, they became easy pickings when the bolt rounds started to fly.

I love my land raider. having 14 all around with las-cannons is just great.  The fact that it can move 12 dump out some assaulty type guys (who get to assault) and still shoot one cannon is priceless. too bad for the price of one I can have 2 wagons with deff rollas >_<

Like the dark eldar I am not sure I can play this army effectively.  Since the squads are small (5 man combat squads) I am afraid to commit them where they are needed.  Then when I do commit I tend to leave them out to dry.  I need to find that happy medium.

Lastly I might add in a small squad of purifiers.  *Gasp*  From what I hear they are the most hated unit in the new book.  As I see them they will fill a role as an assault based squad since the get 2 attacks base.  I think the sadest part of  the game was when I got to assault with one of my squad and only had 10 dice to roll.  At least the deathcult had 24 attacks... stupid 4++ invuln >_<

So, any advice out there for a guy who wants to play with some cool figs but doesn't want to be scene as the douche that plays grey knights.  Keep in mind I don't have much more than what is currently in my list.  I have a dreadnought,dread knight, another rhino/razorback and a box of 5 GK Strike squad that I have yet to build.