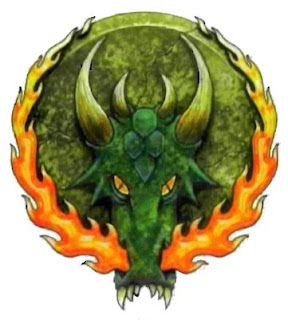 So now that all the name dropping is done lets get to the game.

We got Capture & Control with a Pitched Battle deployment. I won the roll for first turn and decided to deploy everything. I was hoping for a good first strike and to pop a few vehicles it was not to be. 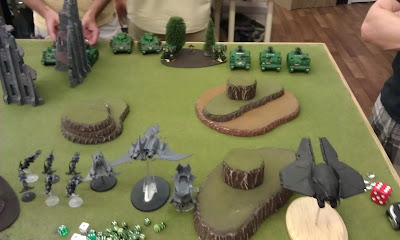 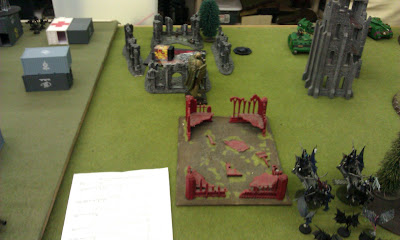 DE Turn 1
I moved forward my army and then fired.  my Razorwing shot at his dread on the right hoping to do some splash damage with the missiles. The void Raven shot at Vulcan's ride.  After the smoke cleared I killed one missile launcher from a combat squad, 2 bolter guys from another combat squad, the heavy bolter from Vulcan's ride and one of his combat squad ran.

Salamander Turn 1
On his turn he moved up his razorbacks and the blew the Razorwing up.  The Venom was wrecked and one of the raiders was immobilized. I was very lucky I didn't lose more. 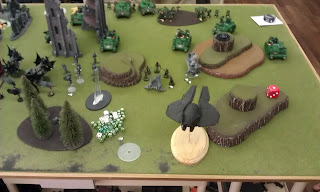 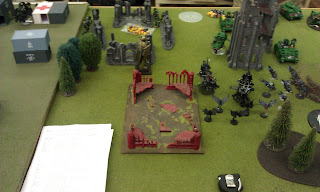 DE Turn 2
I moved my wyches raider over and disembarked the wyches getting ready to assault the combat squad from the razorback on the far right.  I moved the incubi up to assault Vulcan and company.  the rest of my army moved up the left side in hopes to control that side of the board.  During my shooting phase I blew up Vulcan's ride and blew up the center razorback.  My incubi ran 2 inches and were to far from Vulcan to assault and the wyches had to assault the razorback since they didn't blow it during the shooting phase. They glanced it and stunned it.

Salamander Turn 2
With The incubi and wyches out in the open it was easy pickings Also my bikes were ready to die as well.  My incubi and arcon took most of his shooting to be taken down but they did fall.  My void raven was destroyed and my bikes lost 4 members. The wyches only lost a few members to shooting but then was assaulted and lost some more and then broke. The bikes were assaulded as well and lost another member but they held.

DE turn 3
I saw vulcan was in the open So I decided to try to assassinate him but failed.  My scourges moved up and killed a Razorback then assaulted the guys inside.  They completely whiffed on all their attacks and lost one in return.  My Warriors decided that we needed someone on the objective so they got out of their immobile Raider and then ran for cover.  The bike and combat squad had a slapfight tying combat/

Salamander Turn 3
Vulcan and 3 combat squad smelled blood in the water and moved to kill the Haemonculus in the raider.  his tanks and Dread took pot shots at the warrior squad in cover.  I went to ground and after all was said and done I only lost 2 guys.  He stunned my raider. He brought in another squad to the fight off the scourges.  he killed 2 more with me whiffing again.  They passed their leadership and were stuck in.  The last bike fell and he consolidated toward my warriors. 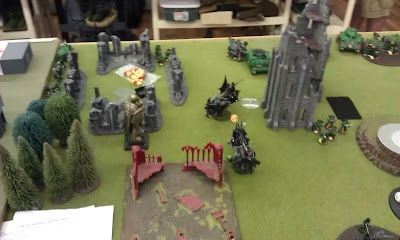 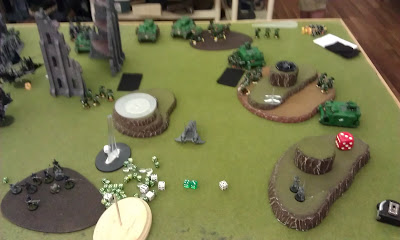 DE Turn 4
I got out of my raider and moved to take revenge for the bikes. My 1 dark lance missed.  My scourges finally fell. From 7 splinter rifles, a blaster, a splinter cannon, and a blast pistol I got 1 wound and he saved it.

Salamander Turn 4
His army started to move toward my warriors .  On the right side he couldn't bring down the raider with shooting so he assaulted it and wrecked it.  He returned fire on my warrior squad killing a few  and then assaulted them.  I killed 2 and he killed 2 so we tied combat.  He shot up my warriors in cover and killed 2 moreThey made their morale and we moved on to turn 5. 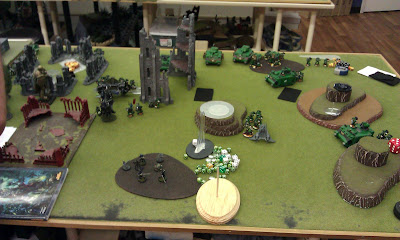 At this point all I could hope for was that my warriors could survive his shooting and his guys could not make it to me and the game to end on turn 5.  One of these things happened. My turn was quick.  I shot the dark lance and hit and wounded a guy but he made his cover save.  I then finished off his combat squad and hid as much as I could in the open.

He killed my warriors that were on the objectives and then the ones out in the open.  Then he wrecked my last raider and a total victory was had by the salamanders.

It was a great game with a great guy.  I would love to say I was surprised but the outcome but I would be lying.  I really needed more damage to be done on turn 1.  Having my 2 close combat troops taken out on turn 2 did not help either.  Early in the game I think he was thought I was doing well.  I was certain of my demise when the wyches failed to open the razorback in the shooting phase and the incubi were stranded in the open.  From there it was just me trying to stay alive to the end of the turn 5.

Over 5 weeks I went 2-2-1 so not a bad record but I when I play these games I am just sad when late in the game most of my army has been destroyed.  The next 3 weeks will be dedicated to my Grey Knights.  I don't have the models to cheese it out so we will see what I can do.

this weekend is the 3rd battle of Armageddon.  Hopefully my orks will avenge my Dark Eldar. We shall see.

Have a good weekend.
Posted by Grenn Dal at 9:03 AM