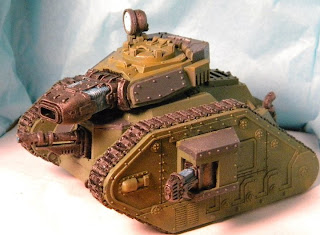 Today I have changed it up a bit and added a small platoon to the army.  Here is what I got.

So I dropped one stormtrooper unit and the plasma vets to get the platoon.  I put the plasma guns in the company comand and the snipers into the platoon command.  the 2 squads will join up for a 20 man blob.  I decided to try out a demolisher russ instead of a second plasma Russ.

I am not sure if this is a good change for my army it coumes out to 14 kill points.  In a objective game I have 5 units to take objectives though and the 20 man squad might be a bit difficult to get rid of.  Probably not though.

Tonight is the second week of open play at Fantasy Books and Games I will bring both my IG army and my Grey Knight army.  If I can find a 1500pt game I will use the IG but if all the guys want to play 1850 then it will be the Grey Knights.