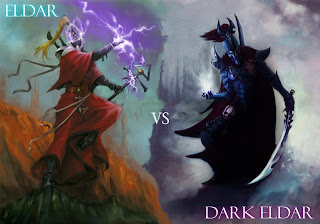 Last week in the league I was pitted against and Eldar list.  Here is what I remember from his list.

It was dawn of war with kill points.  Both sides were given a tunnel entrance to place on the table to come through if we wanted. I won the roll off and chose the side of the board that had the most room for me to move around in and had him on the side between 2 tables.  Forget which side is tactically better I want to game in comfort >_<

I placed my raider full of witches dead center of the board and he set up his avatar and guardians near his board edge and his bikes further off to the side.

brought everything in firing most of my dark lances at his avatar and the razorwing missiles as well and killed off the avatar and most of the guardians. I finished off the Guardians with the witches. 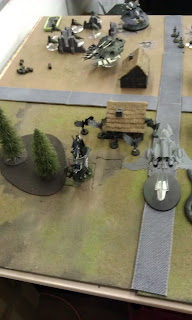 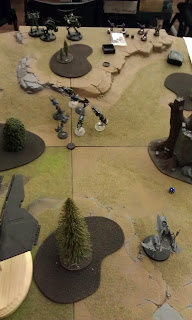 His turn one saw his 3 tanks come in on the right and the reapers on the left with the walkers in the middle. He did a lot of shooting, wrecking the witch's raider and killing all but 2 witches.


On my turn 2, I moved up most of my army with my jets sliding to the right. The Venom moved flat out.I used the bikes to try to eliminate the walkers and the jets stunned 2 of the tanks(I was hoping for a wreck) and the scourges stunned the third take.  I did make the dire avengers ride weaponless.  I killed most of his bike squad with my warriors and the rest ran. The remaining witches did nothing with their heywire grenades. 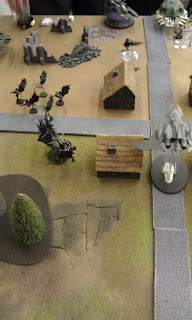 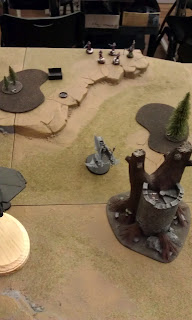 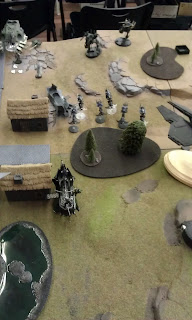 On his turn 2, he blew up the venom (does it get a cover for flat out?) eldrad got out and took out my scourges. 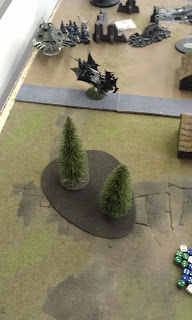 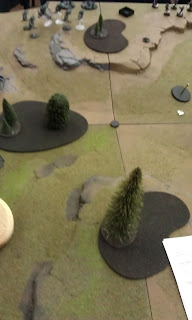 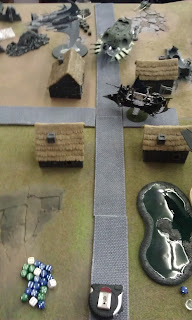 Turn 3. My incubi moved into cover.  I repositioned my raiders and tried to blow up his tanks.  No luck though I did shake them again. My Voidraven unleashed it's missiles at Eldrad and Co along with my warriors and killed almost all of them.  They did not break. My bikes tried to kill his walkers Killing 1. 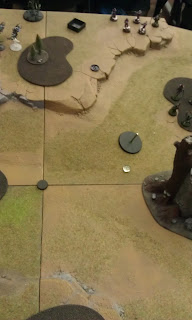 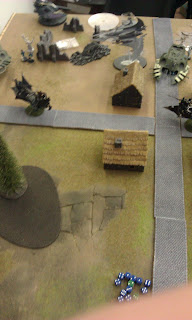 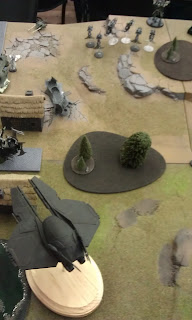 On his turn 3, he charged into my bikes with his walker shot at my incubi wit hthe reavers but with cover and feel no pain they survived.  He tired to bring down my razorwing but it make it's invul saves. His walker killed 1 bike and we held.

From here I don't have any photos.  To sum up my incubi killed the reapers then went over and saved the bike who were down to 3 bikes.  he took out my raiders then killed a few warriors before I killed his tanks and the guys inside.  The witches blew up a tank and then died in the explosion silly 6+ save. my warriors exchanged fire with eldrad finanlly bringing him down after 3 rounds of shooting.  his dire avengers did not do much.  If I remember right I blewup their ride and they sat in their crater.

I ended up winning 11 to 7 the game did go to round 7 but he conceded the game before we played.  It was a tight game till round 5.  This is the round I blew up most of his rides.

Overall not a bad game.  I still do not like how the witches just fold after hitting something.   Also I am unsure if the planes are worth their price.  If I had the money I would probably get some ravengers and maybe some more incubi.  Even though I hate the model of the ravenger I can almost get 2 for the price of 1 jet.  I want more incubi just because they are the coolest models... I do like the mandrakes but they are as useless as the flayed ones for the necrons.

I am not going to change up my list this week.  I have tweeked it enough to let it stand for the last 2 weeks.  (also I don't have the funds to add to it)