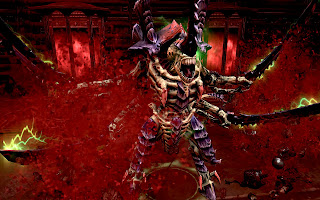 These last 3 weeks I have been testing out 3 units I have never used before while we have our break in league play.  They were the Swarmlord, the Doom of Malan'tai and a squad of devilguants (termaguant with devourers) in a spore pod.  Each unit has it pluses and minuses.  First up is the Swarmlord.


The swarmlord comes in a whopping 280 points without the guard.  This is REALLY expensive.  He is pretty good in hand to hand with his instant death causing invuln rerolling bonesabers.  The problem is getting him there.  I really like the +1 to reserves rolls and rerolling outflanking but after my experiences those pluses are just not worth his big price tag.  So my Swarmlord is now going back into the genepool maybe never to come back.

The next unit is the Doom of Malan'tai.  I have had several people tell me that this guys is a must include. With his pod, he  is 130points.  Not to bad a price but it does take one of the precious elite slots. After 3 games I have seen what everyone is talking about. Although people have been rolling pretty well he still kills a couple of guys and then blasts away at other tanks to get more guys in range to suck more brains.  The one thing I have to remember is that he gets to do it on the enemy's phase as well. One of the  weakness is that he is really easy to kill.  With all the rockets, melta, and lances that are out there all it takes is one failed 3+ to kill him. The other big drawback is in this transport heavy era, he sometimes does not have a lot of options to go after.    Overall I like him.  I am not sure he will make my list all the time but he will see the table again.

The last unit were my devilguants.  I have run these guys before and I always like the 3 shots each that they provide.  Running them in a drop pod is a bit different.  Luckily in each game I dropped the pod within synapse range so I never had them go feral.  I like the surprise they give when they drop down and throw out a ton of shots. But then they are all clumped up together for an easy blast or template shot.  Plus putting the devourers on them double the points and the pod on top makes them even more points. For the same points I could probably take more than double the amount of regular gaunts.  With 2 squad of guants I an do 2 troop tervigons as well.  The downside there is in kill point games my mommas usually don''t make a lot of babies.  This really hurts the effectiveness of the Tervigons.  but that is off topic. I think that I might run devilguants again but they are not a must include.

So there you have it.  It was a successful test and I have decided my model of the swarmlord has been moved to the bottom of the list to be painted.  While the doom is painted his ride is not.  This means I should finish building the sporepod and give it a nice paint job for the next time I play him.  With the guants, I just need more of them.   With the possibility of 2 tervigons making babies I just do not have enough of them.

Next week the league starts back up and I have decided to lose with my Dark Eldar for 5 weeks.  Stay tuned for some battle reports and maybe if I get my opponent's permission a video report.  ooo exciting :)