First impressions of the dark path 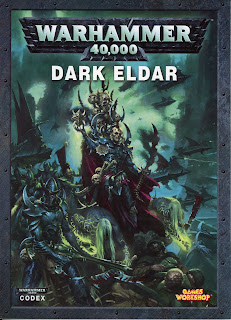 So last Thursday I launched my Dark Eldar out of the portal at some Tau.  After some scary moments I pulled out a victory. I took some pics but about halfway through the game I forgot to keep up with the chronicling so no battle report for today.  Also I forgot to dump the pic from my Vita so I am a loser on all counts :)

What I do have for you today is my feeling on how my list did and things to improve and change.  First of all my MVP.  The Razorwing jetfighter. 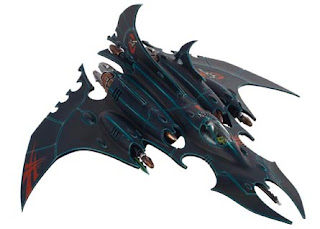 This guy came on and killed a squad of battlesuits then stayed out of range with the night shield and the flicker field worked when he got a lucky shot into it.  The second turn it took out more crisis suits and provided a distraction for the rest of the game.  The bomber really died right after it came in so I think I just got lucky with the razorwing surviving most of the game. My Most Useless Unit were the reavers.  Stuey called this one with them just getting destroyed after coming on the board.  I think they killed 2 fire warriors since there was no armor to shoot at when the came on the board.  I will try to make a bigger squad.

I feel sorry for my witches since they came on and got to assault 1 squad which they destroyed and then got blown off the table.  The incubi did live longer even though they did the same thing.  Came in, smashed face, then got shot up.  Though their 3+ save really helped them out. I love 3+ saves... funny that I hate playing armys that come with it standard. 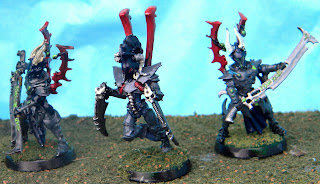 The warriors were moving into position to start killing stuff on turn 6 but I could not do any damage with the dark lances mounted on their raiders.  That is just bad rolling though. It will even out someday :)

I am very tempted to get another set of these guys and another venom for them and drop the witches to run 2 squads of these guys.  Then Maybe add another squad of warriors to zip around and shoot stuff.  we shall see.

I think my next purchase will be a ravenger.  3 dark lance shots should be a welcome addition to my army.  I still have a squad of scourges to put together that was donated to my Kabal.  I should have these ready for flight on thursday.

Lastly over the weekend I when over to Chad's place and had some kick ass food and put together my new Triarch Stalker and Tomb Spyder.  They both were pretty easy to put together and look cool.  I still am a bit sad the stalker was not a canoptek construction.  I thought it could have been cool as a big monster metal space bug. You can't have them all :)  A big thanks goes out to Chad for cleaning off the sprue marks..  I know things like that bug some of you guys.   I sometimes just don't seem to notice them :)  maybe I should get my eyes checked >_<