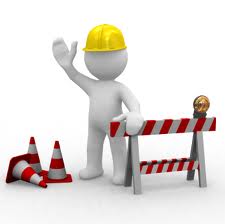 Last time, I talked about hanging out with some friends and building some Necron goodies.  I thought today I could show you guys a few of these and whatever else I am working on.  So first up is the Necrons. 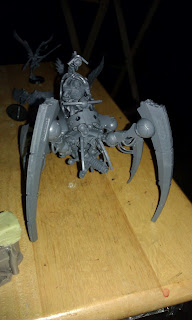 The Triarch Stalker seems to be feared on the battlefield.  I used it once and it really didn't do much for me. It is AV 13 on the front and sides with a 2 shot multimelta that, if it hits, makes everything else shooing at its target twin linked...handy  The down side is that it is open topped and 1 pen, if it doesn't explode, brings it down to AV 11.  With only 1 weapon, a weapon destroyed result will make it useless.  At 150pts It is a bit expensive compared to a anni barge.  Then again the barge does not have a S8 AP1 melta shot.   I hear these are better if taken in pairs. 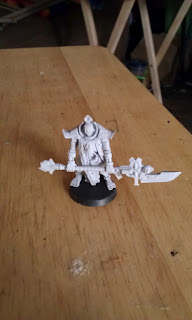 Next up is Vargard Obyron This guy is pretty neat.  He is not an overlord so you don't get a royal court if you take him as an HQ but he has the true Veil of Darkness that can take you out of combat if you survive a round. Also he gets a free strike for every attack that he saves up to a max of 10.  He is the bodyguard of Nemesor Zahndrekh.  together they are pretty tough HQ choice since Obyron does not take a FOC slot if you take Zahndrekh. The one downside I see to Obyron is that he doesn't have mindshackle scarabs.  All lords that expect to be in CC should have those buggers standard.

That is all the Necons I am working on.  Next up are the dark eldar.  A friend donated me some scourges to fill out my Kabal so I needed to get them assembled.  here is what I have so far. 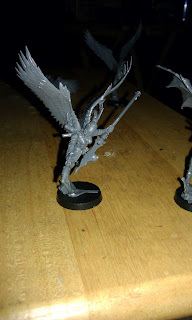 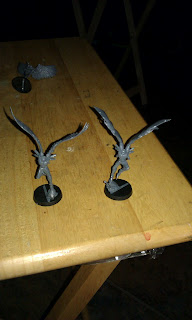 The one on the left is the Sargent of the squad.  I have it equiped with a blaster pistol and Agonizer.  They say in the codex that the Agonizer is usually a whip but does come in many other forms.  I like a spear better than a whip soooooo she got a spear.  Plus with the feather wings she looks a little like a Valkyrie. I am dreading to assemble the other 4 since they all have 2 handed weapons and with my sausage fingers I sometime have trouble holding everything together while the gule sets.  I should have these assembled for tomorrow's game though >_<

The last thing I am working on is my ork buggies.  I got this one from Puppets War 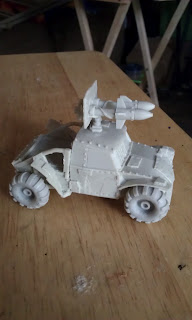 It is a bit small but I can work with it.  I think I have a boy manning a big shoota sitting in my bit box that I can switch to manning the rocket on this guy.  It is a cute little buggy. 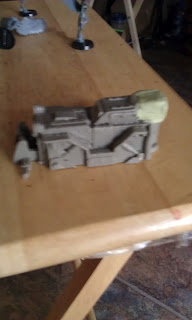 This Guy is from ramshackle Games and cost around $10.  I ordered it with a bunch of wheels and tracks that I will try to use to convert deff koptas into more buggies. One of the down side of this guy is it had some weedy looking human on the back of it which I snapped off and put some brown stuff around.  I will be mounting some rockets to this and probably some armor plating to help blend in the mess.

I don't think that I will be ordering from ramshackle games anymore.  They do have quite a few bits but their plastic is really brittle.  I will have more Pics of these guys as they start to come together ^_^

Well that is all the pics I took today.  I am sorry if a few are blurry and the quality is not that great but what do you expece from a phone at 6:30 in the morning >_<

Tomorrow is Dark Eldar week 2 list.  Hopefully friday I will have a battle report for you.  until then...