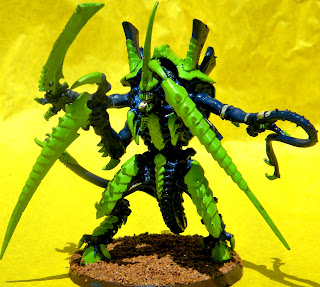 Last night, the guy I played didn't have 1850 and was getting back into the game playing a new codex (Necrons). While trying to relearn the game he was showing one of his friend the game.  So, I did a lot of teaching and tried to help my opponent relearn the game and explain rules to his friend. I always like to help the new guys because I know how it was when I started.

We rolled up capture and control with pitched battle deployment.  Necrons got first turn.  His objective was in the corner so I put mine in the opposite corner.  I  reserved my 2 genestealer squads and decided to outflank them  I figure if they come in on the wrong side they can grab my objective.  Win/win for me.

Turn 1
He moved up everything except his overlord and guard.  His lighting strikes only hit one squad of hive guard, wounded them but they passed saves.  Due to night fighting only his monolith had range. He shot the particle whip and hit 4 gargolyes and the tryant.  He killed the gargoyles but did not would the tyrant.

My turn one I moved forward and the tervigon makes 9 babys with no doubles.  During my shooting phase, my zoans immoblilized his barge. One squad squad of hive guard blew up that same barge. The other squad took out the big gun and one side of the ark. My tryant put 2 wounds on Stormy. Finally, my gargoyles took out 4 out of 5 deathmarks. They did not get back up but the lone one stood his ground.

Turn 2
He does not roll for night fighting to continue. He moved up one squad of warriors up the left flank trying to get to my objective. The deathmark, Stormlord, destroyers, ark and immortals move forward.  He fires the monolith and puts a wound on the tryand and one of his guards along with some gargoyles.  He tried to hit the tervigon with the staff of destruction but he rolled just short but the destroyer shot him and gave him a wound.  His ark and Immortals failed to wound anything.

I got 1 squad of stealers in on the right side so I set them up to nom nom the warriors that were close to the edge. My tyrant moved up ready to charge the monolith.  My gargoyles jumped into the trees getting ready to eat the immortals.  They lost one to dangerous tests.  The tervigon made 10 babies but pooped out T.T . then moved in for the kill on his Stormlord. The new babies made a beline for the objective. During the shooting the Zoan and guard took out 2 destroyers only to see them get back up.   The other guard took off the last weapon on the ark and we moved onto assaults. The stealers ate the warriors and the tryant with guard blew up the monolithand ate the last deathmark.  The gargoyles ate the immortals. I forgot to assault Stormy so he got off easy. And my gaunts lost 5 to the destroyers and another 5 to fearless wounds… killing the squad.

Turn 3
Not much for him to do.  He shot at my original gaunt squad that was hiding in a bunker.  They lost 2. His warriors moved down the flank and he assaulted my stealers with the lord and lyches.  Bad news for the stealers, they lost combat by 5 but, they stayed in the combat. Stormy shot at the tervigon with his gauntlet but failed to wound.

My second squad of stealers came in on the left side ready to eat his remaining warriors.  My gargoyles started to head for the overlord and  lyches. Zoans, guard and gaunt shoot down his destroyers making sure they can’t get back up. The Tervigon failes to wound Stormy during shooting phase but, he kills him in close combat.  I forget to charge with the left flank stealers and the others are taken down to 2 models. They still hold.

Turn 4
Since I left my stealers out in the open an inch from his warriors he rapid fires into them.  He takes out a few but they don’t run.  On my turn the charge into them and devour them.  Seeing that he only has his overlord and guard sitting on his objective and I had some gaunt on mine I ask him if he want to call it.  He agrees.  Win for the nids 1-0.

The game did not go well for the Necrons.  The night fighting really hurt him turn 1.  Also he moved closer to me making it easier for me to assault.  I think he had too many little squads.  I also think he was counting on holding his objective this his guard and Overlord. I tried to explain that troops needed to hold it but I am not sure he understood.  Throughout the game he would forget to shoot with something or he was using the orb like in old days.  I tried to point out different tactics.  I hope he learned something.  He seemed to be having fun. It is hard to when getting slammed.

Well my nids go home with bellies full of living metal.  I think that should improve their saves ^_^ There is a tournament this weekend but I am not sure if I want to go… If I do I think it is time for my guard to come out to play.