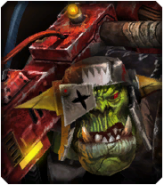 This week the league continues the Planetstrike missions.  Again we will use the first scenario.  I have decided to go with a crossfire defense layout. here is my proposed map. 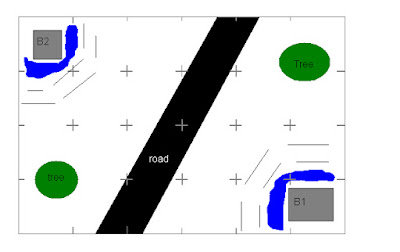 B1 and B2 are my bastions with the big blue mobs are my boys.  I will probably angle out the bastions but my MS paint skills are not good enough to draw parallellograms well fast.  I will put some big guns on top of one bastion and some loots on the other.  in reserve will be my stormboyz and my wagons.  I am not sure I want to 2 zones of defensive walls but I just might try it out.  I was thinking of having these closer to the bastions with the mobs in the zone between them that way if something does come through to charge they would have 2 difficult terrain tests to contend with.

One item I am thinking about is to put some ruins or forests between the road and my bastions. more than likely I will be playing SM army since those are the dominating forces at the shop so the 4+ cover really wont help them but the difficult terrain might hinder them.  The one problem I see is if they are droping in with pods this will stop them closer to my bastions.

The warboss goes with the 18boyz in one battlewagon and the bigmek goes with the lootas.  the big squads provide melta protection for the bastions.  The Koptas will go with the Vulchas and battlewagons in reserve.

For strategems I have thought about a lazmaze and trenches or an escape hatch. another idea is to take void shield on one bastion and a KFF on the other.  Nothing is set in stone so suggestions are welcome.