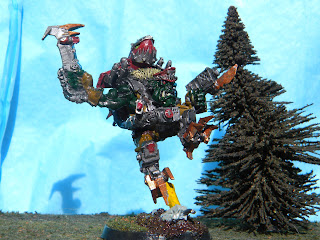 Last night was the first night of league play at my FLGS.  I am playing Orks for this league and I was prepared to play the list I had created which you can find here.  The big problem is I forgot my container that held my Bikes.  So with some quick thinking I subistuted a regular warboss and a group of nobs for the warboss and nobs on bikes and gave them a battlewagon.   My matchup for the evening was a mech IG.  He had:

This was going to be a tough battle.  Those colossus could wreck my day.  And even though I had a Kustom force field all the melta and lazcannons will make mince meat out of my wagons.  Hopefully I could get arcoss the field fast enough to start Krumpin some tanks. We were told the mission was Kill points with the pitch battle deployment

Here is how we set up 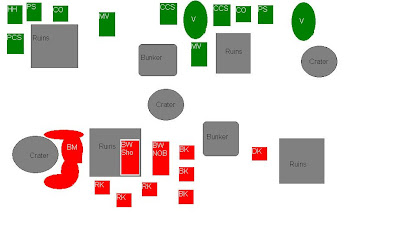 My Shoota boys(SB) went with the mek in one battle wagon while the warboss joined the nobs in theirs. I won the roll off and chose to go first.  I turboboosted my Lone Kopta(DK) to the edge of the board to line up a side shot on the Right colossus during my scouting phase. He moved his Vendettas to the left to line up shots on my battle wagons for his scouting moves.  He failed to steal the initiative  so off to turn 1.

ORKS
Every one moved forward.  The wagons moved 13”, the ‘ard boys mob on the left space out as much as possible, the kopta made sure he could get the side shot and the cans moved up. The kopta blew up his colossus (mission accomplished!) while the cans ineffectively shot at the Vendettas. 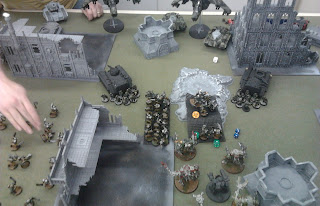 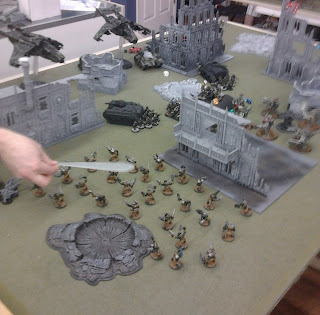 IG
He moved his both of his melta vets up and disembarked to blow the wagons to kingdom come. He moved his Platoon Command up close to the ‘ard Boys and got ready to flame them down. He moved his CCS up to get some ready to lay down some plasma fire.  His Hell hound joined the platoon command to get ready to fry some boys. And his other platoon squads shuffled around a bit. During his shooting phase his meltas blew up my wagons one Vendetta shot at my cans doing no damage while the other shot at my Nobs he vaporized one.  His one of his command squad shot at the nobs wounding 3 of them while the colossus shot was in effective killing none.  He burned down 8 of my ard boys. His platoon squad shot at my kopta and gave him a wound. My Nobs made their pinning check and we were off to turn 2.

Orks
My ‘ard boys moved up to get ready to mulitcharge the hellhound and Platoon command. While the shoota boys moved out to surround the melta vet squad that blew up their ride.  The Nobs went after their own melta squad. The cans moped up into the exploded battle wagons and the kopta swung around to get the rear shot at the platoon squad’s chimera. The Kans wrecked 1 vendetta and the kopta wiffed. The boys charged forward.  The ard boys killed the PCS and knocked off the hellhounds  big gun then spread out. The shootas killed their melta vets and chimera and the nobs just killed the vets 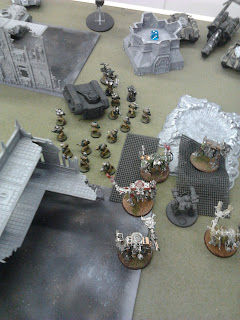 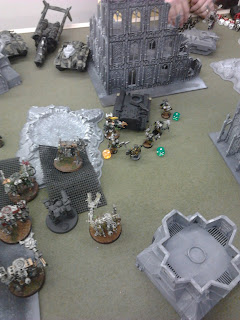 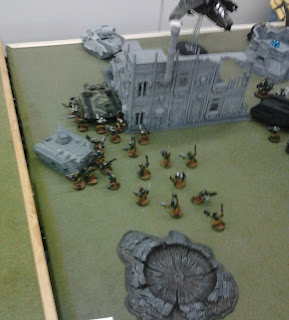 IG
He dumped out  both of his  platoons one by the ‘ard boys and the other by the kopta he moved up his CCS to dish out some plasma love and moved his hellhound back. During his shooting his vendetta killed a can and stunned another.  His Command killed off a couple of my nobs while his other one got some of my shootas.  He failed to hurt the kopta and some the ‘ard boys took a few casulities (nothing to worry about)

Orks
No sign of those stormboys.  The nobs move toward the CCS ride while the shootas move toward the other one. The Cans continue to move forward and the ‘ard boys get ready to assault the colossus and the platoon squad. I call my waaaaaagh and make sure my ‘ard boys are ready to krump. While my nobs get ready to assault 2 chimera.  The kopta stuns the chimera and the cans can’t bring down the vendetta.  Onto the assault. The ‘ard boys wipe out the platoon and the colossus while the shootas blow up the CCS’s chimera killing 2 plasma guys and making them break.  The Nobs kill both of chimeras wrecking both.

IG
He moves his hellhound over some and rotated 2 of his chimeras to shoot at the boys. His running CCS recover  and he starts to move his right most platoon squad over to help his CCSs ignoring the Kopta. In his shooting phase he blows up another can and brings the boys down to 11 boys.  His command squad kills a couple of nobs. They pass moral and the game continues. 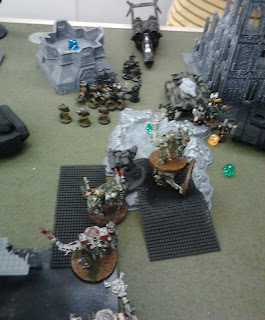 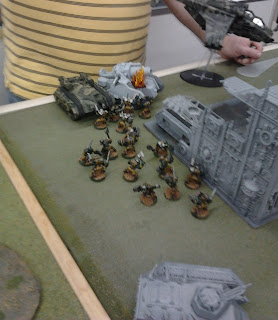 Turn 4
Orks
The storm boys come in and only 2 die to Zagstrucks deep strike rule.  The boys bunch up to charge the hellhound and the shootas get ready to charge the full CCS as do the nobs.  My cans again fail to blow up the vendetta but they do stun it.  Zagstruck is just within range of assaulting a chimera and the boys go after the hellhound the nobs fail to make the charge over the chimera but the shootas have no problem.  Zagstruck wiffed on the chimera but his boys got it.  The other boys only strip the other hellhound bare while the shootas kill all of the CCS but the commander.

IG
He moved his command squad over to shoot at the nobs and move his platoon and it chimera over to help out.  His plasma take out the warboss and last nob leaving the painboy and he breaks. No moving for his vendetta. His platoon kill off a few shootas but they love it and the chimera finally kills the kopta. The commander takes 2 wounds and kills 1 in return.  The nob did 1 wound to him but be made his 5++ but he fails leadership and I over run him. 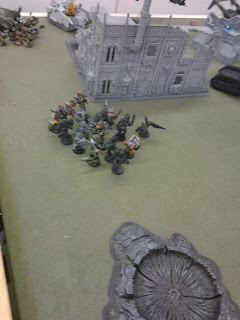 Orks
The boys abandon the hellhound to go after the chimera while Zagstruck and Co charge the hell hound.  The shootas get ready to attack the wounded CCS and the cans keep moving forward. Zag and co kill the hellhound while the boys kill the chimera and the shoota finished off the command squad.
IG
He moves flat out with his vendetta and immobilize it which wrecks it and his Platoon does their best to kill the shootas.  They do not.  The game ends on turn 5 with the orks victorious 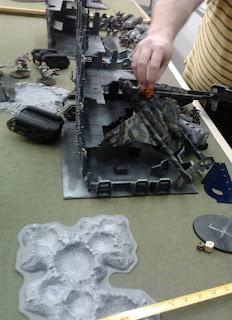 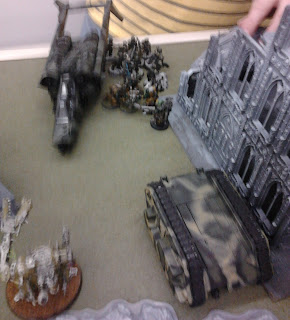 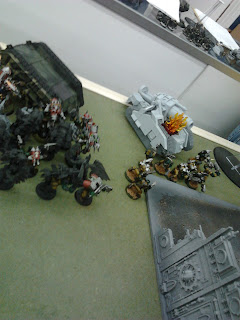 final thoughts
Well the match went well.  I was worried that his colossi would ruin my day but I got lucky with blowing one up on turn one and then the other one went after my nobs once with their 5++ and feel no pain and the second time he wiffed my shootas.  I was sure he wos going to go after my 'ard boys since they were the only real threat to it.  I am also not sure why he disembarked his troops.  They could have stayed inside their tanks and shot my guys to pieces making me waste a turn blowing up the ride before killing the guys inside.  The only reason I can see is if he was worried about them dying in the explosion since they are T3 with a 5+ save.

Over all I had a good time.  My opponent seemed to be having fun.  It was a nice casual game.