In preparing for Shorehammer this year, I've been going back and forth as to how I'll be running my Renegades and Heretics List. First, I had to see exactly what I had in the army. Mainly because I've been so focused on building and painting I never stopped to see what I actually had or needed.

So, here's the entire army (assembled using the Renegades and Heretics Army list - I can't use it for shorehammer, but it should provide the bodies for running it as a guard list (my original idea). 101 infantry models, plus 4 vehicles. 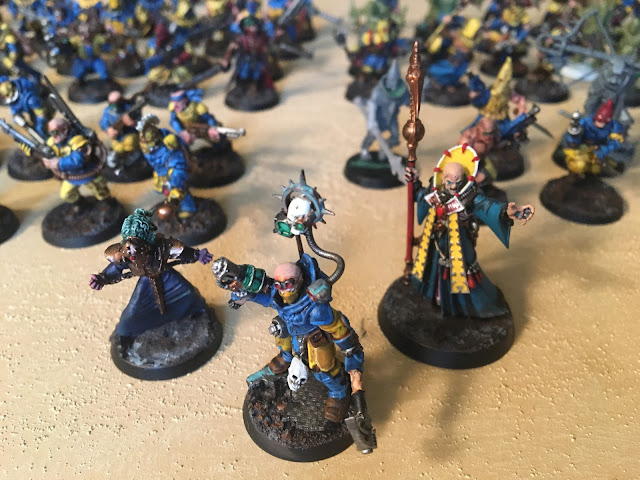 HQ - Renegade Commander and his two trusty (perhaps) Renegade Psyker / Malefic Sorcerers. I can run the commander with a 'plasma pistol' and power ax, or just with a las pistol and close combat weapon, as points allow. His strength is more in the army-wide benefit he gives to the Renegade list, or the orders he can give as an IG Company Commander. 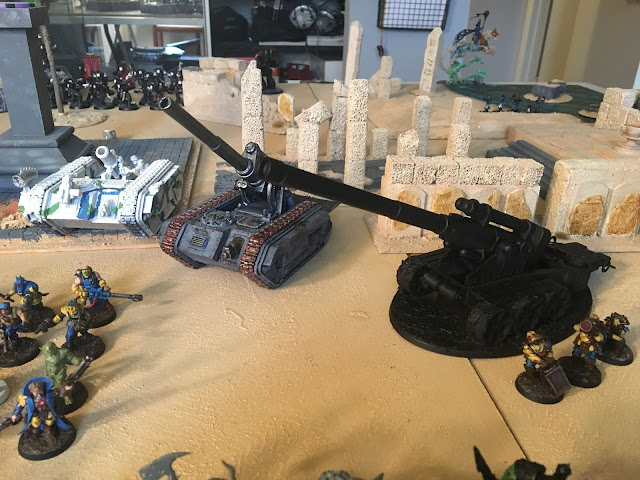 Heavy Support - Two Basilisks and a Wyvern/Griffon, Plus three (Optional) artillery observers. I've run the basilisk platform on the right as a basilisk carriage, which comes with three crew. In the current Shorehammer list, I'm only using the tank basilisk (there can only be one!) and one of the crew as an artillery observer. So technically this could be 4 Heavy Support Choices. (Shorehammer's rules for CP are different, so getting three points a turn to use for Aerial Spotters is far more tricky, I'd rather get rerolls of ones on to hit rolls free from the artillery observer.) 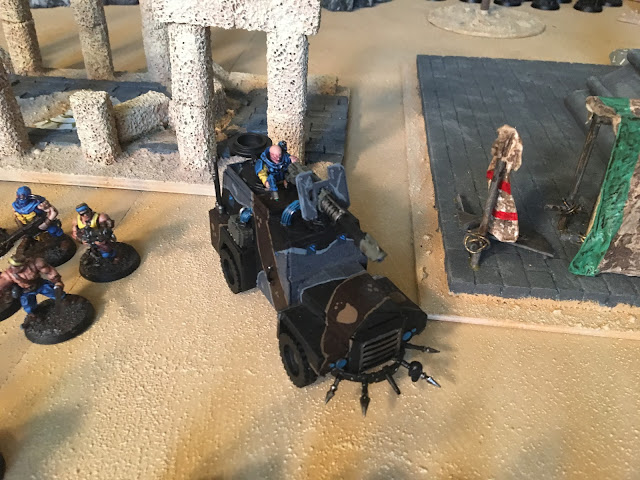 Fast Attack - An Armored Sentinel (Humber MDF armored car conversion) I run it as armed with a multi-laser and 'close combat weapon' (Thanks, spikes!) Could be 'upgraded' to a lascannon, but unless it stays still it's only hitting on a 5, not very useful with just one shot. 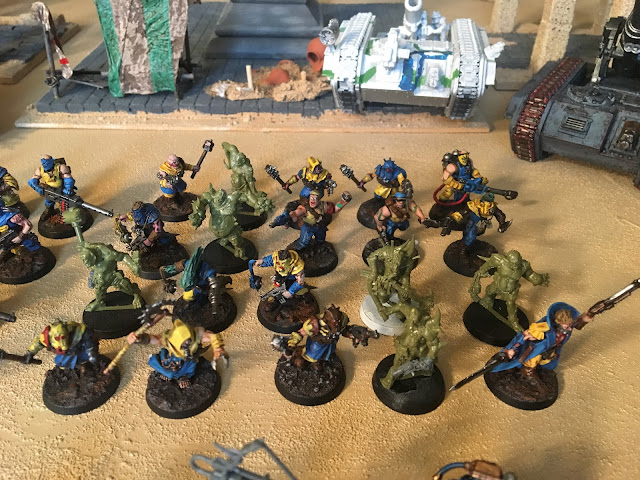 Troops - I've got five troop units, but that can easily be increased depending on whether I'm running a guard list or a renegade list (or even combining it with a Chaos Space Marine List). Here's my 'close combat' squad of cultists - they get two attacks each, and in a Chaos Space Marine list, have the "Heretic Astartes" keyword so I can both Warptime them and give them veterans of the long war. I can also Prescience them. 41 attacks, hitting on 3's with 20 bodies behind them, is a bit 'terrifying' (also a major shooty magnet cause of the group's footprint.) When I combine it with other negative morale boosters/psychic powers, even a few casualties can cause major morale penalties (especially useful in my last test game against an eldar list) 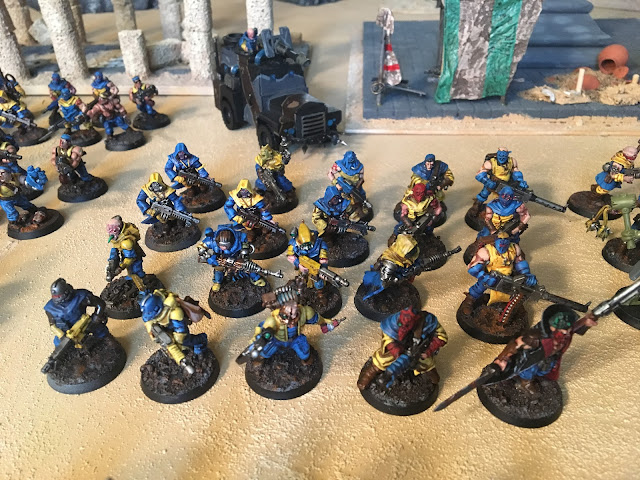 The other 'shooty' cultist squad - double stubbers for objective holding. Plus another 'commisar' type guy leading them to be obvious leaders (and keep groups separate.) This group could also be run as a conscript squad in a normal guard list as well. 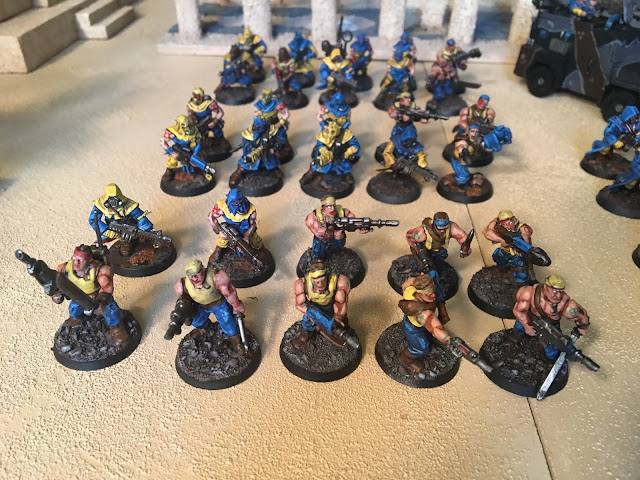 Renegade Militia Squads - There are three of them, mostly assembled from the leftovers of the cultist squads and the recently painted Catachans. They've all got Vox links to help tie the squads 'militia' concept together. Obviously this smart commander has added a few of his own cultist guys in to ensure the loyalty of the turncoat militia. Each squad has a special weapon (two flamers and a plasma gun) since the list is relatively light on heavier weapons. I do have a heavy bolter or two in the works, and these squads may gain them. It could bump me up to four militia squads. 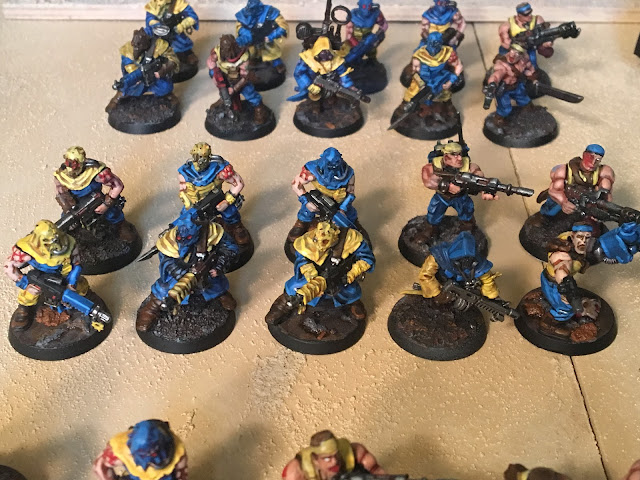 You can see "Burned Face Burnley" in this squad. 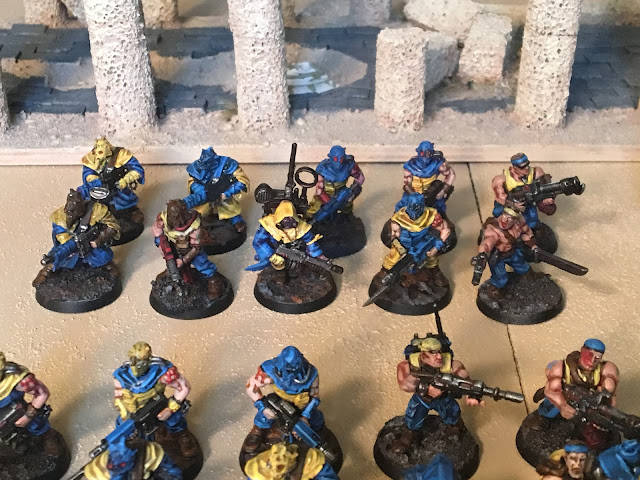 The most 'turned' squad - only the special weapon guy and sarge are still in militia form, everyone else has adopted the renegade cultist uniform. 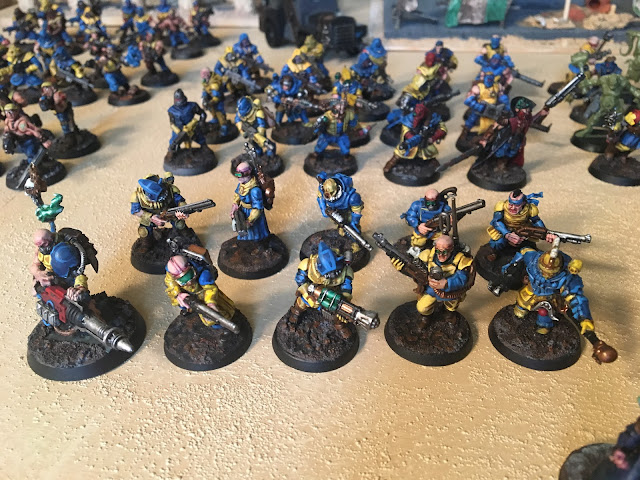 Elites - My most packed component of the list. Originally expanded using my Orlock Gangers (who have since been retired in favor of true sons of chaos), I've now decided to finalize the size of the units. First up is the Sons of the Shotgun Marauder Squad - Armed with shotguns and two plasma (or a melta and plasma) guns, plus a Sarge with a power maul and bolt pistol. My most heavily kitbashed squad (and my favorite) These guys do the heavy lifting and may gain their own transport in the future. In a Guard list, I run them as veterans or perhaps even stormtroopers. I'm curious to see how they'd do in a Valkyrie. 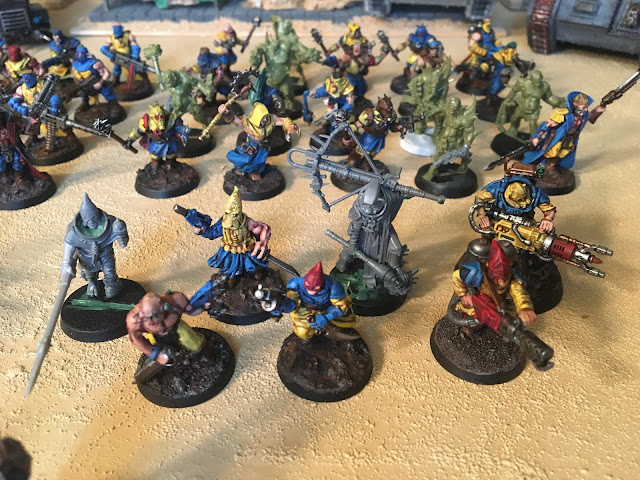 Currently unfinished "Murder Cult" Marauder squad - Reroll all failed hits in the Fight Phase - mostly armed with laspistols and 'brutal' close combat weapons' which means each guy has a total of three attacks - base. PLUS the rerolls means they can be brutal when they hit. Also realizing now that this squad is currently illegal - I can only have two special weapons, so looks like my bigger based las-plas cannon is going to be relegated (Yet again) to a unbuilt command squad still on the way from FW. 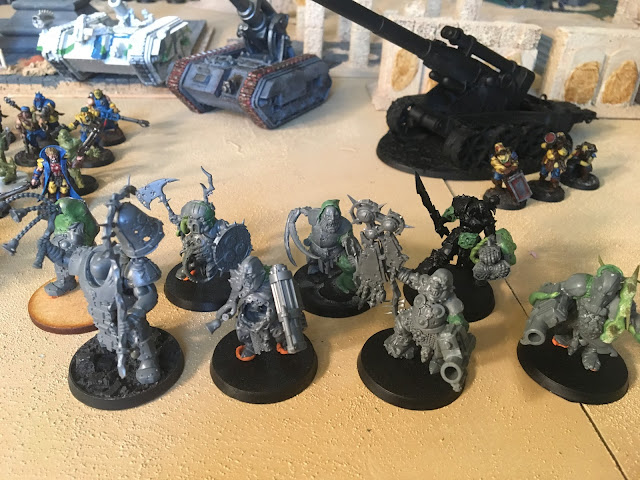 Renegade Ogryns (Or Plague Ogryns) - 8 of the most fun and challenging builds I've done so far. I've really been expanding my green stuff skills with these guys. Built from the blightkings, Ogryn, and even a free GW Khorne Slaughterpriest who has been converted, these guys are the heavy CC punch of the army (or will be).

They can also be split into a group of chaos spawn and ogryns (or just spawn, if I'm running a straight Chaos List). 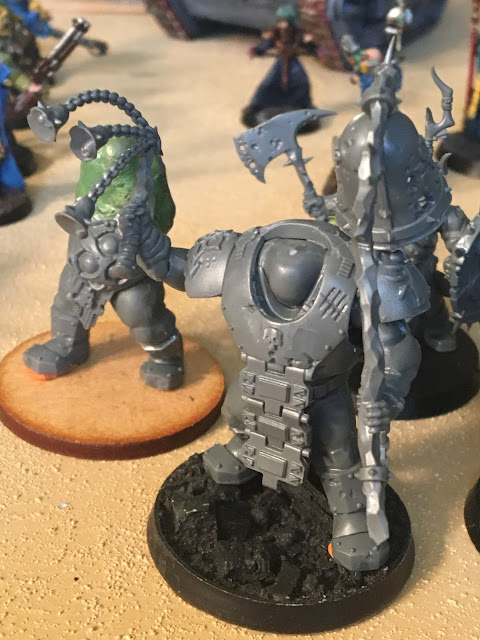 The two most recent and unfinished aquisitions thanks to a friend nice enough to give me more leftover Ogryn leg and body bits. I feel like this guy is the leader - biggest and baddest of them all. Armored up with Plague bits, in a Renegade list he runs around with 4 S10, AP-3 attacks and rerolls failed wound rolls against vehicles (and does d3 damage each time) As a plague ogryn, he does a lower level of damage, but can also explode when he dies. Both units can also activate combat stimms, which can either make a model die (save the rerolls!) or gain +1 or D3 attacks! 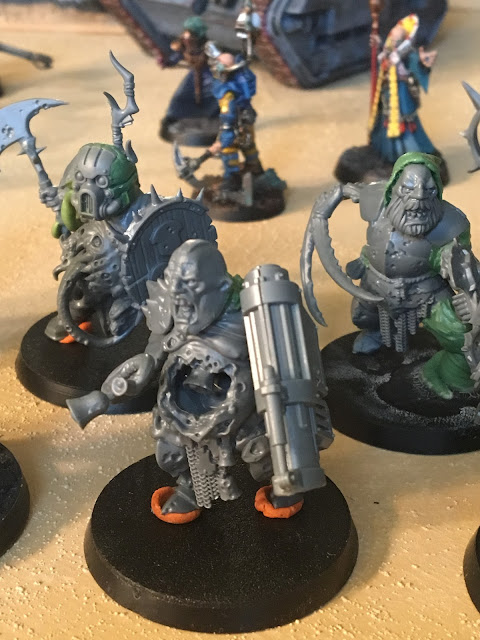 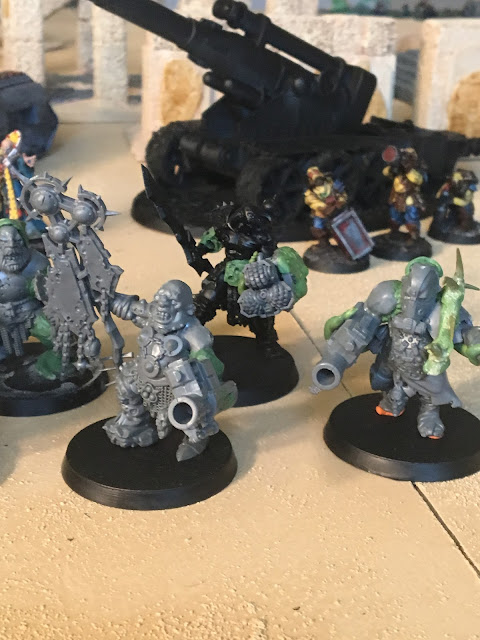 To make them 'legal' for a guard list, I've made three with ogryn Ripper Guns and three with shields and 'power mauls'. That gives me two elite units that I can also use in a guard list. 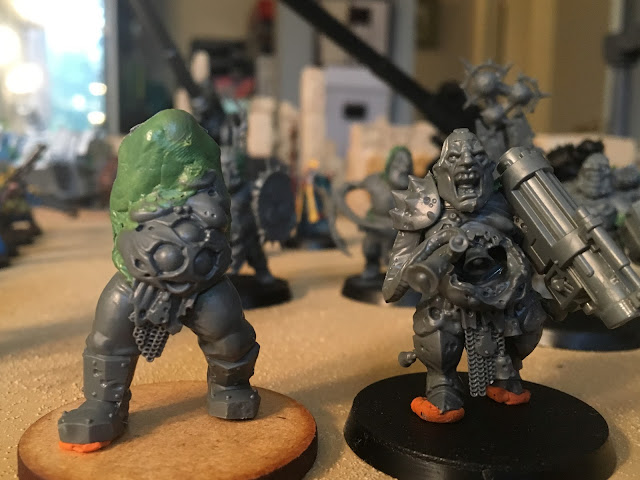 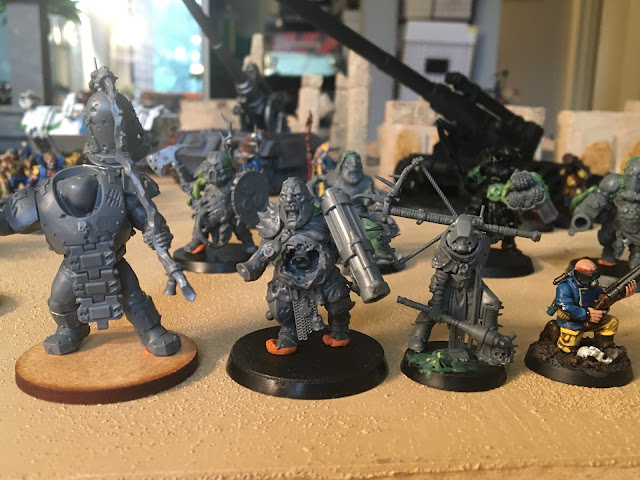 Here you can see a size comparison of the actual Ogryn body, a Blightking body, Cawdor Ganger, and a kneeling Son of the Shotgun. I'm going to build up the blightking body bases ever so slightly to bring them closer to the same size as the ogryns. 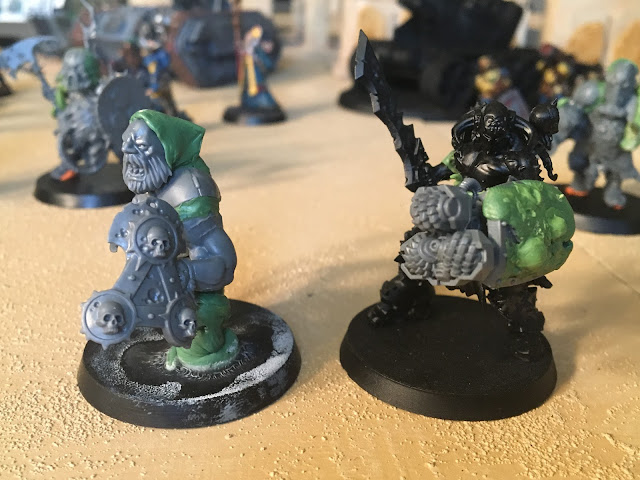 "Power maul and shield' guys - I love his tentacle leg and hood. 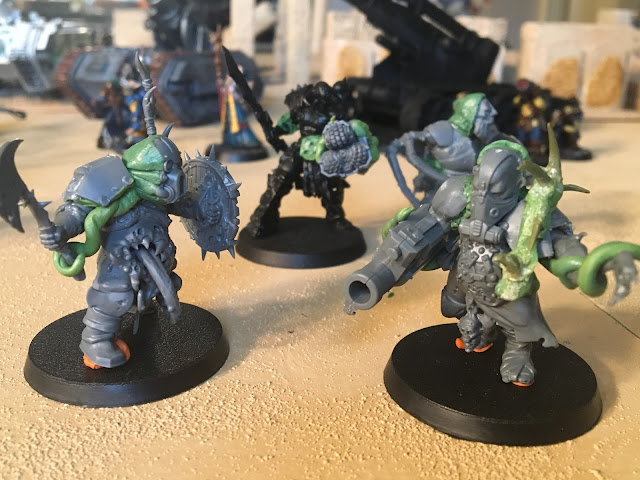 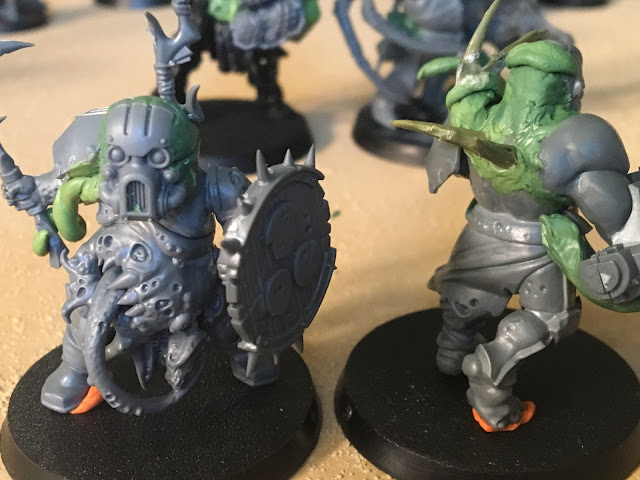 That's all folks! I'm feeling sort of finished with the army once these guys are done, but what do you guys think? It's roughly 1500 points (ish) right now, maybe a bit more.