New Abominant and the Aberrants 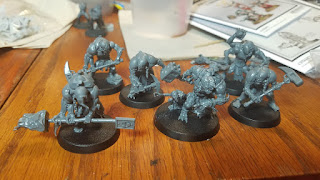 While having fun with my Stingwings, I picked up the genestealer half of Tooth and Claw.  The big part of this release is the Abominant and the Aberrants.  While the Abominant is a new codex entry the Aberrant were in desperate need for a new sculpt.

The Abominant is pretty cool.  His two faces is a gross effect and his huge hammer looks devastating.  All the while he has a little friend hanging out with him.  It is a cool sculpt.  An added bonus is the rules that come with him. 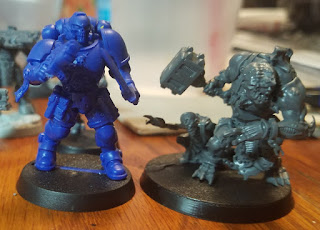 He leads aberrants giving them exploding hits when they role a 6.  Not only does he buff his fellow mutants, he is a beat stick as well. He has three attacks that can turn into six attacks on a lucky roll.  Each of these attacks do D6 damage with a minimum of 3 damage.  He can do a bunch of damage to a knight or other vehicle. The one problem is that he is slow. Unless you can get him into combat right away I think he will be gunned down pretty quickly. 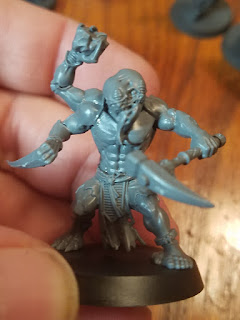 The aberrant kit is awesome.  They big am mutated and now you can have a little variation in you herd.  Before there were two sculpts: one with a hammer, one with a pick.  While the kit doesn’t allow you to make all hammers or all picks, you can make ten unique guys with two kits.  The kit also makes a Hypermorph.  This suped up aberrant has a tail can can bring an improvised weapon ( a street sign) or another hammer.  Since one in five aberrants can be a hypermorph, I guess it is not to bad that you are forced to make one out of your five. 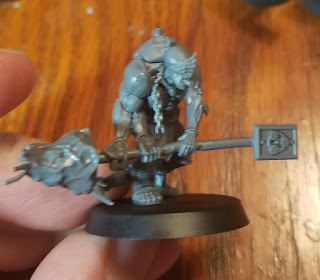 Other than the hypermorph the only rule change is that if the aperant has a pick they also get to attack with their rending claws.  This means that they double their attacks. This is a nice little upgrade before we get our codex.  Hopefully it will drop before Orktober.  If not then we will just have to be patient.  Either way I am planning to try these guys out this Thursday.  Hopefully they will smash some faces. 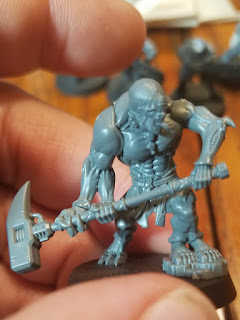 Questions? Comments? For the four armed emperor!!
Posted by Grenn Dal at 12:23 PM