Had a Hurricane-canceled then reinstated mini-game day - so went big with a 1750 point list for the renegades and heretics. But I've been itching to try to them as a guard list (and get access to strategems, relics, etc.) so I decided to pull out a Brigade-Level guard list. Everything in the picture got used (finally!) Plus big Bertha - the Malcador Annihilator - got a turn. Add in a small strike force of Storm Troopers, a scout salamander, and a banewolf for a flanking maneuver, and you've got a list!

Sorry in advance - while I do have pictures, there aren't tons. So this will be text heavy.

List details - Went Tallarn (for that sweet, move and no penalty to motion for Heavy weapons, plus the outflank strategem that I really wanted to try out.), also because it seems to fit the idea of guerilla / fast moving infantry forces that the armies of Tzeentch would seem to utilize.

Command Trait - Grand Strategist - Okay, I couldn't entirely resist the get command points back - I didn't get one back the whole game though (although I did have 12 to start with :-)

Opponent - My friend Dave, who showed up with a co-pilot for a learning game with his Beastman counts-as-Khorne Bloodletters list. Lots of choppy marines + demon princes. Very Blood, Much Rawr.

We did "Contact Lost" as we wanted to do a Maelstrom Mission to give Dave's friend some focus and opportunity to see how the cards and objectives worked. 6 Objectives were roughly evenly distributed across the board. I stretched the entire way, my artillery on the right flank and my 'heavy armor' on the left. The guard squads (all three of them) were spread out between the conscripts, with the vets on the left to hold up the flank. Both primaris, platoon commander, and company commander were in the center, spread between left and right. Ogryns were on the right for the 'assumed' counter attack. I knew Dave would want to deep strike things, so I bubbled wrapped everything as much as possible. See the example of the right flank below. 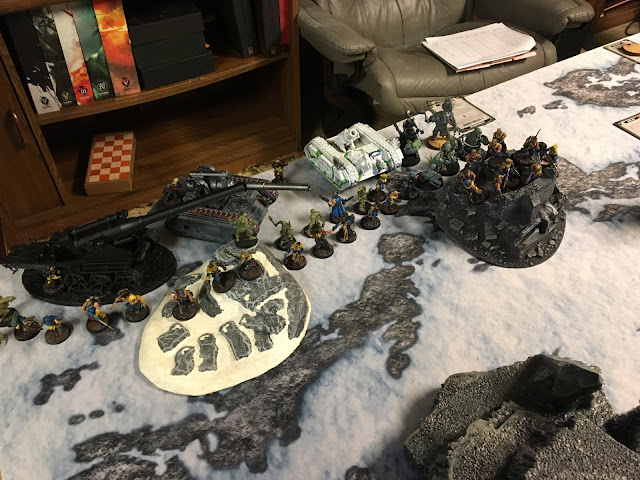 The enemy general and friendly demon prince storm right up the middle, nearly wiping out a guard squad on the charge, but his allied buddy doesn't get in, and the guard squad retreats next turn. Renegade units pour on the fire, and I finally bring it down with a demolisher shell from Big Bertha. 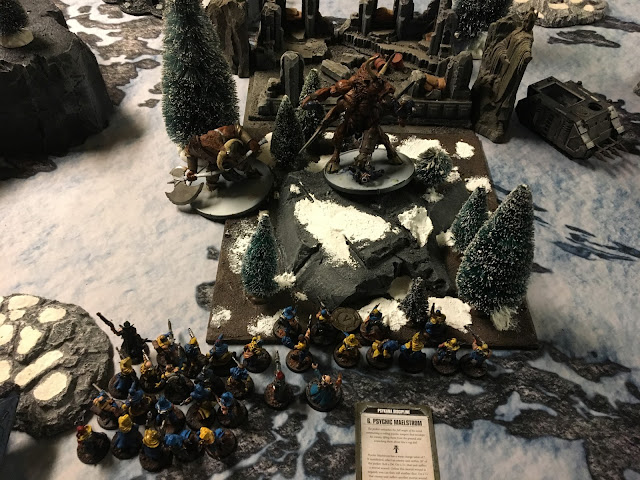 Turn two - So many deepstriking bloodletters and disembarking bezerkers - made the mistake of not focusing on killing the rhino right in front of the line. Below, an renegade infantry squad stares down their doom as it materializes before them. 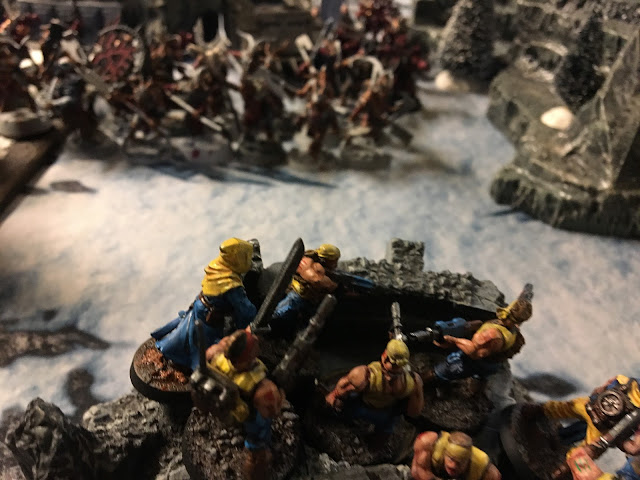 Bloodletters and Bezerkers and Terminators Oh My. This entire line would be gone by the end of the turn. 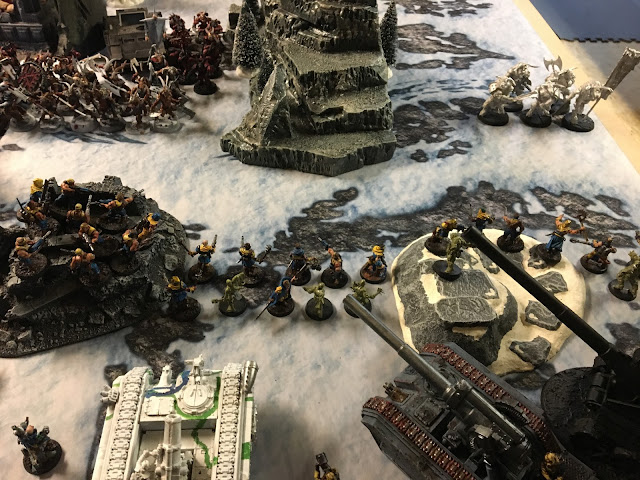 "Let's see how far they can go" 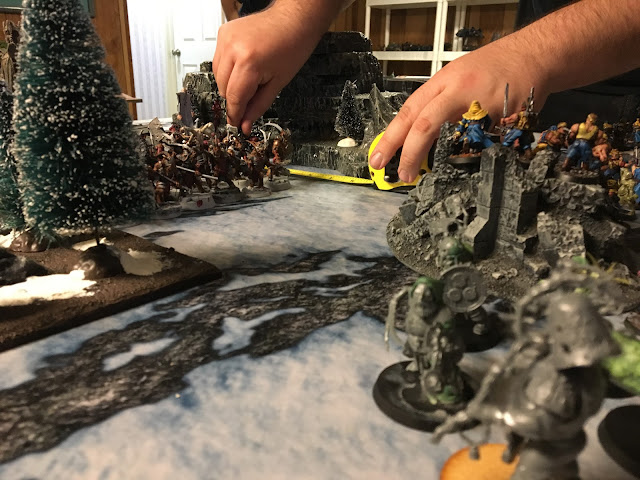 The bullgryns await the arriving storm - On a side note - 4+ invulnerable saves plus whichever psychic power that gives them a +1 to their save is no joke and a great combo - They sucked up bloodletter attacks for two turns, and they pulped no fewer than 20 in return. Only problem is that they kept coming back! 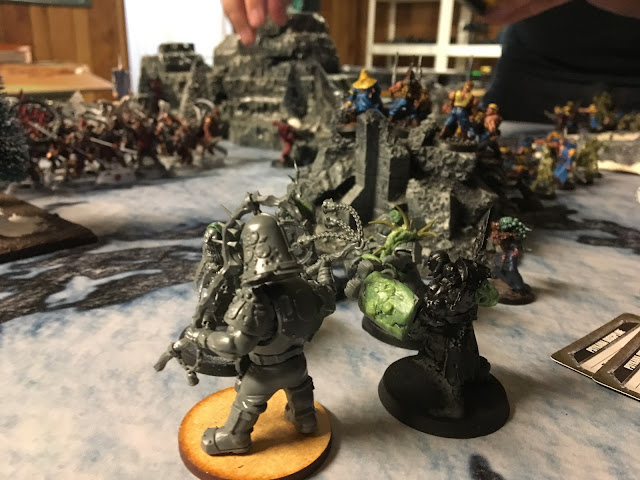 The wave finally hits - the next two turns would see the destruction of almost the entire conscript squad, the infantry squad, and most of the bullgryn squad. In return I manage to kill/morale out the bezerker squad (thanks wyvern!) 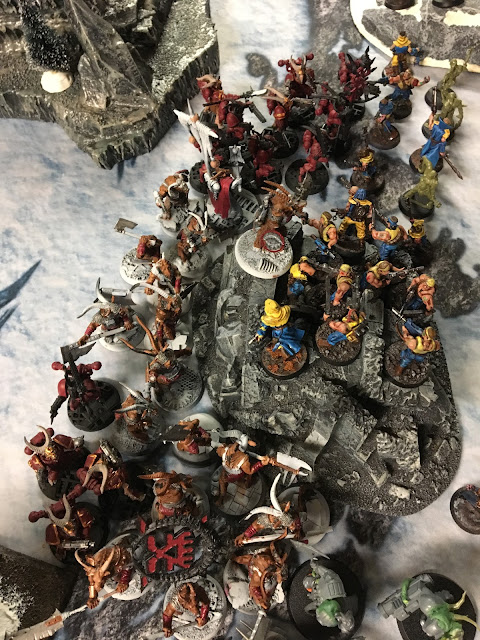 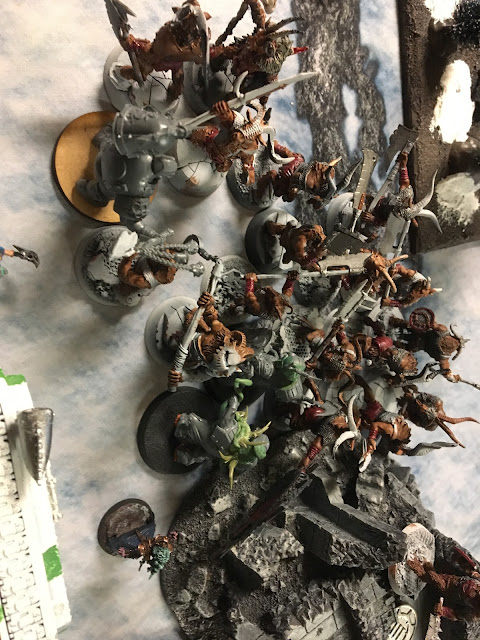 You can see the other squad of conscripts tar-pitting the second demon prince. He could only kill 4-6 a turn, and even losing a few more to morale, the squad held for two turns until he got fed up killing 4 point models. Many skulls were taken, just not very worthy ones. 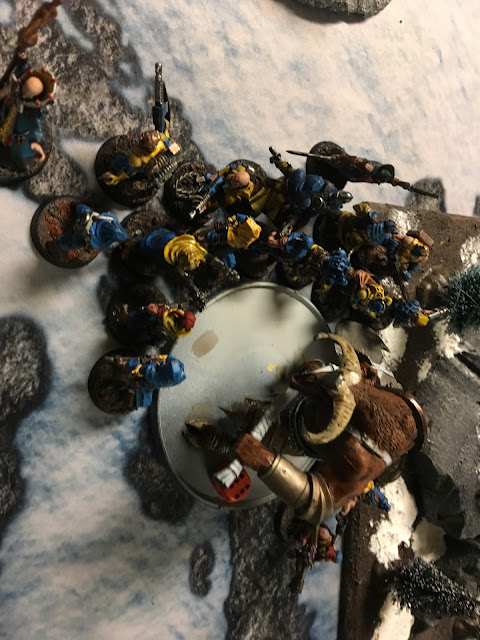 Sorry, no more photos - I got distracted by in-game events!

End Game - After getting lucky with some cards and scoring a kill on his general in the first turn, I managed to eek out a win 6 (or 7) to 5. This list is essentially my Shorehammer List (upgraded), so I was pleased with some parts. I definitely need an additional heavy weapon in the infantry squad to give it some more bite - just running around with flamers or a plasma gun wasn't really effective. Orders are definitely useful, but can't be used on Bullgryns (as we found out, to my annoyance after using them one turn only to discover 5 bloodletters return due to rule failure).

Basilisks are fun, as are wyverns, but I really struggled with anti-armor (again) - Even Big Bertha, while great at taking down demon princes, could not kill the enemy las-predator with 4 lascannon shots over 4 turns - between missing and rolling poorly for damage and wounding, both tanks essentially 'plinked' each other over the entirety of the game.

Finally - transport - I have Arhiman and Rubric marines, plus a rhino in my real shorehammer list, but I may need to squeeze in a taurox into the guard side to give the vets some ability to get places. mobility will definitely be key there, and this army really lacks speed. It's a gunline and soak it up list without the benefit of leman russes.

Dave's Take - I needed to fire the terminators combi-meltas. Would have been helpful. (My take - The Bezerker special charge, pile in, fight, consolidate, pile in, and fight and consolidate again rules are really difficult to know perfectly and use exactly. I tried my best to kill the guys right in front of them to limit what they could pile into, and the rules got a bit convoluted, but if he puts the rules together correctly, it will be (and already was) murderous.)

Comments? Questions? Thoughts on the list? let me know!
- Blockade