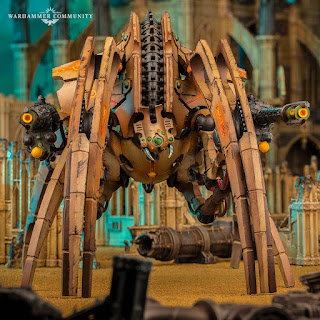 The beautiful monster that was previewed a while ago at Warhammerfest is finally closer to a public release. Today on Warhammer Community they gave us some nice photos and a glimpse of the firepower.

They showed one of the two (at least) main guns. With three to nine shots a gun I am not really impressed. It is like a supped up battle cannon that does mortal wounds on a 6+ to wound. The D6 damage is still not that great I feel the Pylon or vault can do more damage reliably. Seeing that this will probably cost more (in points and dollars) thank either of those it does not give me the warm fuzzies. 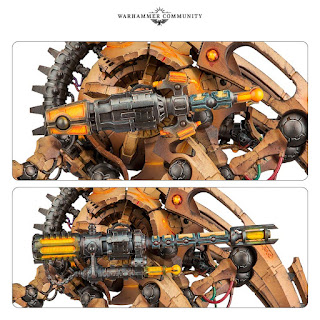 Here we see the two different weapons. The stats we saw could be for either. One option also looks like it has a second gun kind of like the coaxial guns the Bane Blades have. The stats they gave us could be for the smaller gun out of the three but usually they like to show off so I have a feeling it is for the big gun with lesser stats for the other two. 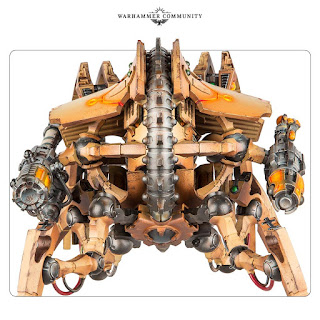 They Didn't show a scale picture this time but if I remember right it looks to be knight sized tall. I am waiting for the other profiles as well as the melee profiles. Maybe this thing is a reiver killer in close combat. I am concerned with the price but no need to worry until it finally come out. I am guessing around 200 for the body and 50 for each arm. Let's see how close I am.

What do you guys think? Is this a want that or want that not?