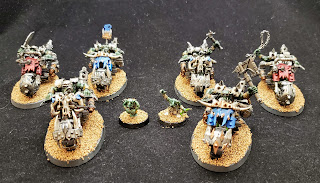 Over the weekend I was determined to finish my ork warbikers. I am getting closer to completing my Speed Freeks boxset. I also took a break and painted up a couple of grots for fun. Pictures incoming! 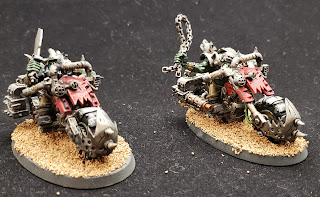 Before I got these bikers I had already had two warbikers and two nobs with power klaws. So instead of making two more nobs, I decided to build six new warbikers. That way I can either have a mob of nine (six new, two old and a nob) or I could run two squads of five( three new, one old and a nob per squad). I think this is the best way to optimize what I am adding to my main army while still allowing me to play the Speed Freeks game. 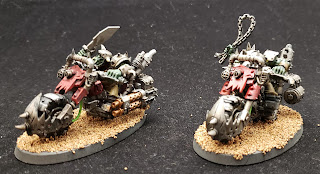 With the decision on what to build behind me, I was challenged with how to paint them. Since the warbiker kit gives you three types of bikes with four different ornaments on the front, I decided to look at my previously built nobs and base each team on those bikes. 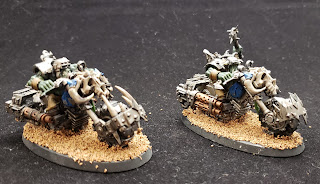 In Speed Freeks a team is composed of a buggy and three bikes. My Kustom blasta-boosta will be red so I made sure the warbikers reflected that team. While I would have loved for myother team of  bikers to have the blue war mask, my other nob had the skull on the front of the bike so I did what I could to tie them to my shockjump dragsta. 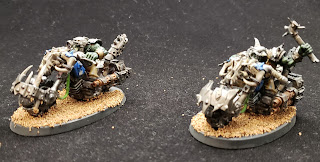 Looking at the other bikes that were left with out a nob I saw that my converted warboss had the mask. I just might go back and paint up his bike to match my first two and just use him as a nob in Speed Freeks. I could also have them as a third squad to use along side my deffkilla wartrike. 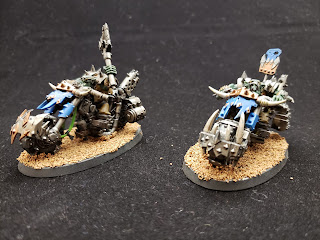 This would leave my two old bikes with either my painboy or bigmek as a fourth squad. This can go with my Snazzwagon once build and paint it. I will then be able to support a four player game with just my models. Now if only I could find some willing victims, I mean players. 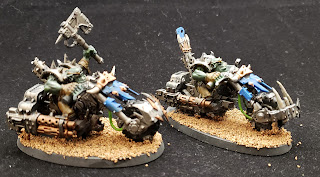 I saw a tutorial that showed a quick way to paint up orks. it involved using mostly washes. I wanted to try it out and since it requires a white primer and these grots were primed white, I thought I would give them a try.

While I did get them painted up, the technique I tried didn't quite work for me. I think I needed a different wash I used Athonian Camoshade and it was too brown and not enough green.  I finished these guys using my normal style. I kept the wash painted clothes on one just for fun. 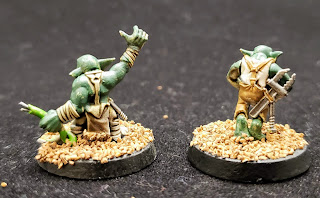 I might return to this style. I like how the cloth turned out. While it might be a bit faster it probably won't save me a ton of time. I am going to try a couple more and see how it goes. The washes are just too expensive for trial and error.  I am hoping this shade will do a decent job on my ork skin so it doesn't go to waste.

That is all for this weekend.  I plan on focusing on the terrain and Boosta-Blasta so Speed Freeks is completely finished.  Then I can start of the Snazzwagon and other projects I have waiting for completion.