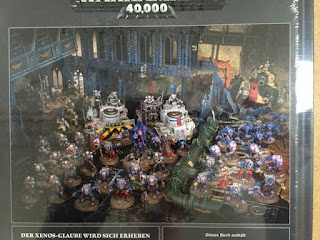 So this weekend we got a few more images to get us drooling over the new genestealer cult. The above picture shows us the two new variants of the new vehicle as well as a Russ tank.  Pretty cool. All of these photos are on many sites but I got them from War of Sigmar.


First up we see the back of the box for the Neophytes and Acolytes.  I like how they show all the options for the weapons.  We see both the variations of the Metamorphs and acolytes. I am would guess the metamorph options go along the tyranid rules.  Lash whips and crushing claws are fun for the whole cult. 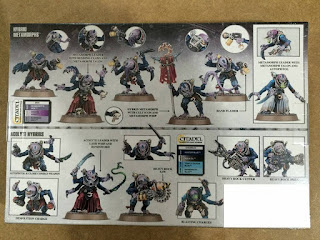 For those who still want to use tools we see the heavy mining gear like the rock cutter, drill, and saw.  There is even a bone sword for the leader.  pretty cool. 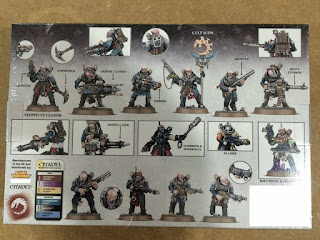 On the Neophyte box we see the new options as well.  We see the seismic cannon, a webber, various power weapons, some shotguns and the trusty mining laser.  Both set contain icon banners with I am interested to see what rules go with it. There is speculation the seismic cannon is a grav cousin.

Next up are some pictures from the Oct White Dwarf 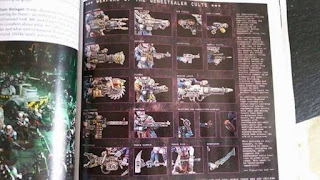 Here we get a better look at a lot of the weapons. It is a bit blurry and I don't see anything different from the back of the boxes except the power hammer which looks like an aberrant from Overkill 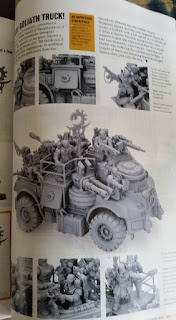 Then we see the new Truck.  I love the looks of this guy.  It is jam packed with cultists and it looks like a genestealer popping out the side compartment. The two variants seem to differ by weapon options and the Drilldozer Blade.  I would like to see the rules for the drilldozer.  I am wondering if it is close to an ork Deff Rolla. 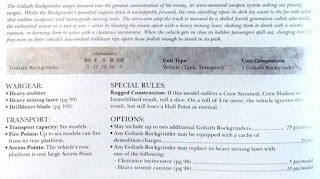 Looking at that data entry I am not sure who it is supposed to transport.  It is not an assault vehicle so I don't think the acolytes are the ideal cargo.  On the other hand it only holds six troops so the if the min size of a neophyte unit is ten they won't be in it either. Maybe the demo charges will make it an assault vehicle.   If so, then pack in the Acolytes and metamorphs! Heck, use some Genestealers!

The last image seems to be the table of content from the codex. 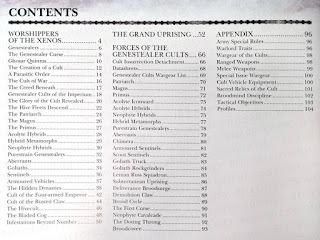 Out of these we haven't seen an Iconward.  The rest have been covered by the Overkill box or the IG codex. Looking at this I could probably field an army using my IG and Tyranid forces until I get the newer units.  There are some rumors about making Neophytes with guard units.  I have some Leman Russ tanks and Chimeras.  I could load them up with some genestealer and give them some protection. My space hulk Broodlord is a good stand in for the Patriarch and I could use one of my wyndvane psychics as a magus.

I am interested in the formation and to find out more about their gear.  Since the codex come out this weekend I would assume the leak will happen in the net couple of days.

I am not sure how powerful this army is going to be.  I doubt it will be eldar good.  Until we see the formation and new rules we won't have a complete picture.  I am optimistic.