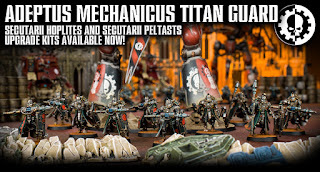 While we have seen these guys in a few Forgeworld open day events,  Forgeworld now have these upgrade kits for preorder.  They also have released the rules that can be found here. 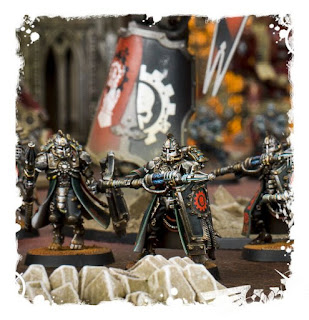 So there are two different units: There are the Secutarii Hoplites and the Secutarii Peltasts. Both take an elite slot in the Skitarii army force org chart.  They are equipped with a Kyropatris Field Generators.

The Generator allows a re-roll armor saves of 1 as long as there are five models left in the squad and if there are ten models, shooting attacks are 1 less strength.  This would help the frailness of the Skitarii units. It is nice but not game changing. 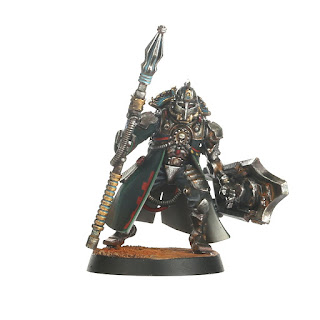 The Hoplites are the guys with a lance and shield.  They seem to fit into a anti-armor role. In close combat they are concussive and haywire with an AP 4.  As a short range shot they still have haywire shot but it goes up to AP 5.  Haywire is nice but at 12" it will be difficult to get them where they need to be. They might be better than a squad of  vanguard with the haywire gun. If only the dragoons had this lance. 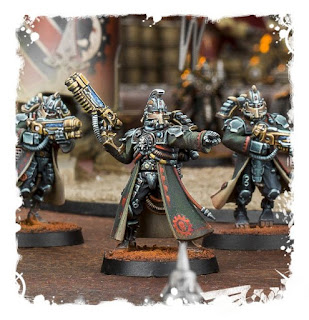 The Peltasts are more like a sternguard unit.  Their gun has three different profiles. There is a 24" strength 3 2/4 salvo with shred, a 18" strength 3 blast that can ignore cover and ignores line of sight, and a 30" strength 4 AP 3 shot with rending.  Since they are relentless, when the shot the salvo profile it will always be shooting the 4 shots.  The blast shot can help clear out hordes of guys.  The AP shot is the one that raised my eyebrow though. 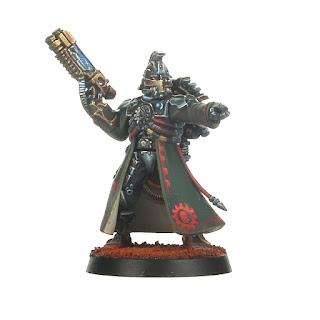 I am always looking for more AP 3 or less weapons.  The fact that it has rending as well makes it even sweeter.  I would want these guys even if that was the only profile that the gun had.  I guess fighting nids or orks I would want to use the other profiles but only on rare occasions. 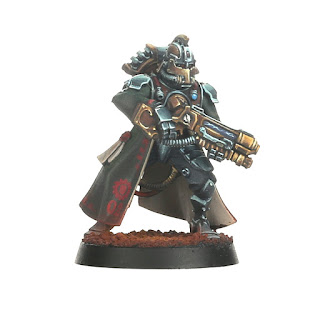 So, eventually I will be getting both of these kits. Since I have one box of Skitarii waiting for these upgrades, I have decided to get the Peltasts upgrade kit for my September hobby purchase.  October is Dreadtober time so I decided I would build and paint up my second ironstrider for my contribution. If you want to join in the fun grab a dread like model and have fun.

Thats all for now.  The Nova Open is going on and I was spanked in my first game.  Those dang psychic powers are my bane.  Curse you Tigeruis!!!!!!