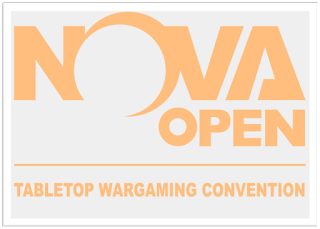 At the Nova Open I played three games in the Night Fighters Event.  This event spanned three nights and incorporated with the Narrative Warlords and Recon events.  The first two games I played alone against a single opponent.  The third game I was paired up with another team member and we took on a team from the other faction.
The games over all were interesting.  There were eight missions to play and civilians placed on the field for infamy or fame points.  They had a kill point mission and a maelstrom mission but they have 4 unique missions that were interesting and made it more challenging. 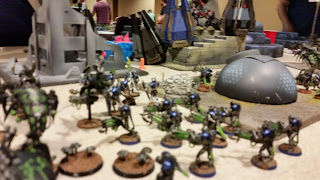 My first game I was matched up with a ten droppod list with Calgar and Tigirius.  Tigi had a spell that lowered my invuln down by 3 and every turn he targeted a unit and his grav centurions then ripped that unit to shreds. 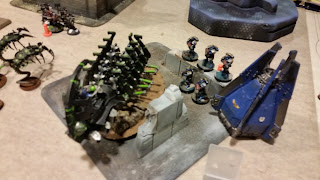 I also didn't think to bubble wrap my ghost arks an the melta squads finished them quickly as well. 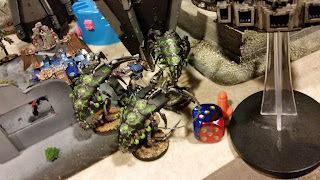 My opponent was a fun guy.  He knew it was a hard list.  I know I played it completely wrong.  I would now have my warriors out of their rides protecting it from meltas.  The wraiths could have used cover better so even if they lost the 3++ they could of had a 4+ cover.  I could have used the veil to move my command squad in his backfield where they could assault the thunder fire cannons.  so many mistakes. 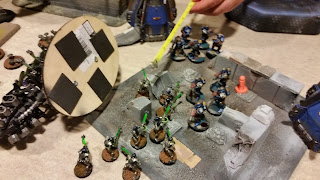 My second game I played another Necron player,  He did not play a Decurion which caught me a bit surprised. He had a C'tan and a destroyer cult detachment.  While I was taking out his forces pretty well I positioned myself poorly for the final turn and almost lost the game by objectives.  I think if I was a bit more aggressive I might have done a bit better.

the third game was against the same Necron player and his buddy who was playing a Khorne demonkin army.  He had a huge dog unit with a lord and herald on juggernauts.  I was teamed up with a Ravenwing army. 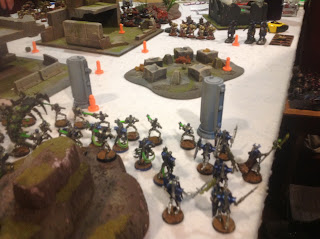 I castled up in the corner waiting for turn 2 when my partner would come in.  I lined up across from the chaos army.  Thinking about it I might have done better going up against the Necron list and let the Ravenwing take care of the doggies.  They huge pack of dogs just tore through my ranks.  I just couldn't do enough wounds to it to slow it down. 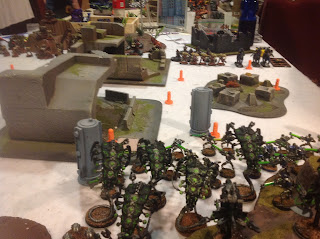 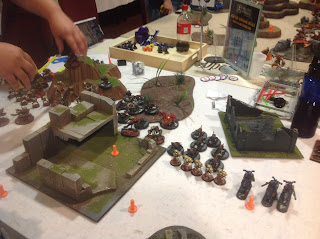 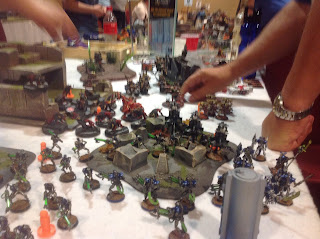 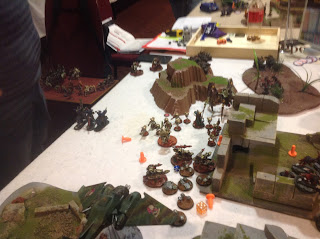 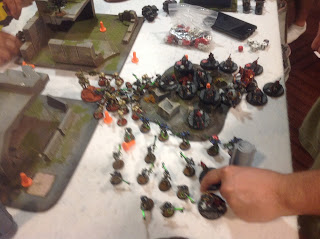 Hind site being 20/20 I think if we focused on the Necrons we could have pulled out a victory.  I kept feeding units to the big dog pile and they wiped me off the board.  Most of the Ravenwing was still in tack.  The mission was a kill point mission which hurt even more.

So I ended 1-2 for the weekend.  I had a good time and the guys I played were competitive but not one of "Those guys"  I didn't have to face a knight so I was happy about that.

I would recommend the Narrative for anyone looking for some fun games and great players.

Tomorrow I will have my list with photos.
Posted by Grenn Dal at 2:01 PM