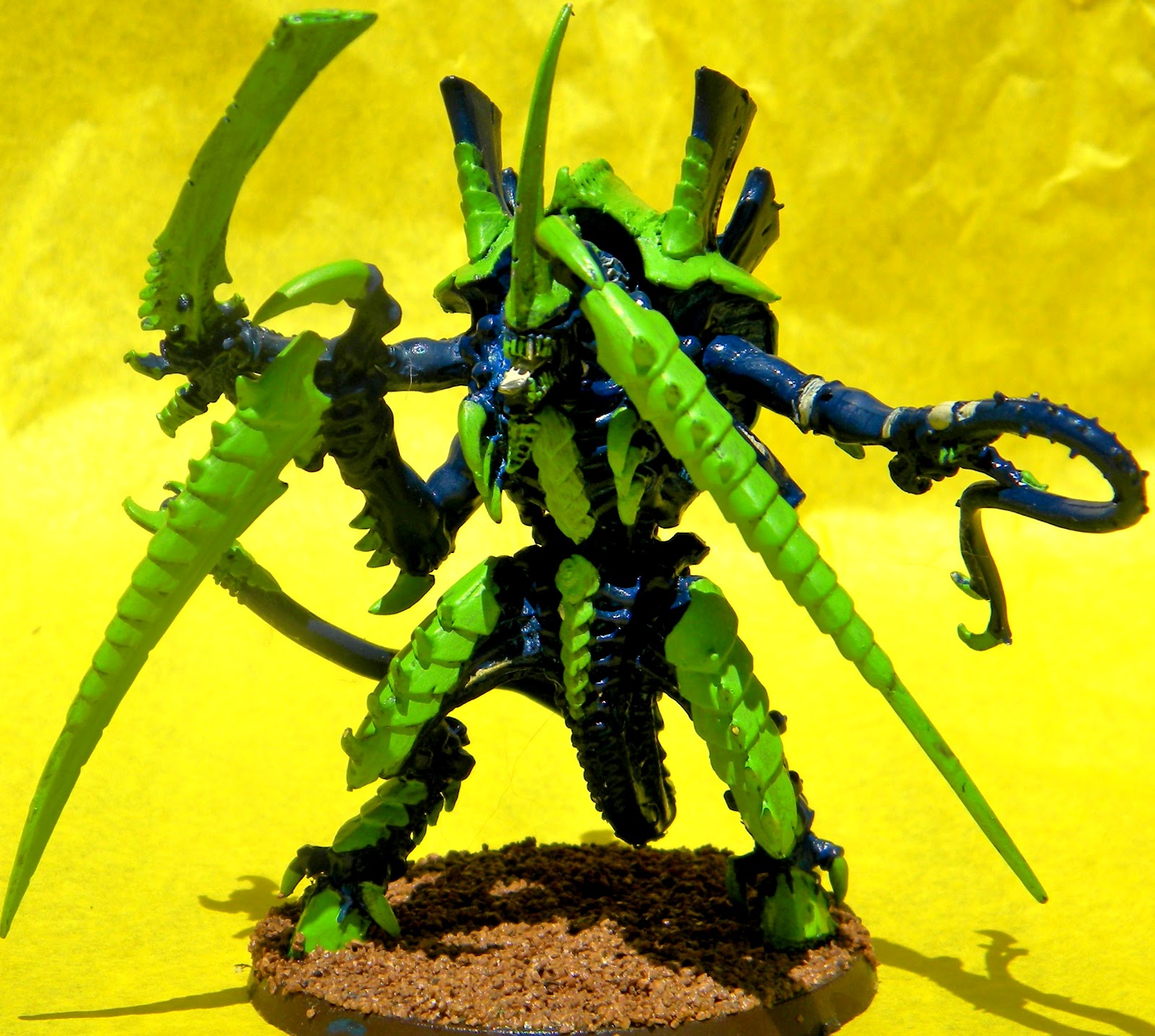 Today I am going to focus on the HQ's in the new book. There are some minor changes. The HQ is now needed more than ever since the changes to instinctive behavior has become more punishing. I was praying for an invuln save.  Looks like the answer to those prayers was no.  The big loss was  not keeping the big rule book psykic powers.  Everyone is whining about this so I will save you my rant.  Boo hoo  get over it.

The Tyrant is the big baddie of the swarm.  you can put some wings on him give him a bone sword and lash whip and you got a decent close combat beast.  He is cheaper as are his wings. If you do 2 CC weapons you get +1 base attacks and now he is a level 2 psyker. For those of you that like the devourer Tyrant he is better shooting so he is now BS4.  With all this goodness we did lose our 2+ armor.  If I was walking my tyrant I always gave him the 2+.  I guess now I will need more guards.

Speaking of the tyrant guard I am happy with the changes. first of all they have a new model and if I didn't already have 4 I would be making some of these guys.  I am definently going to magnetizing the weapon options on the ones I have so I can use all the new abilities.  No longer are you stuck with bone sword or lash whip.  Now if you want one you have to have the other.  We also get access to the new crushing claws for some AP2 action. We also can have toxin sacs and adrenal glands which is a new upgrade.  Lastly the new Shieldwall is a lot better than the old one.  Auto passing look out sirs will keep your big bug alive a lot longer. 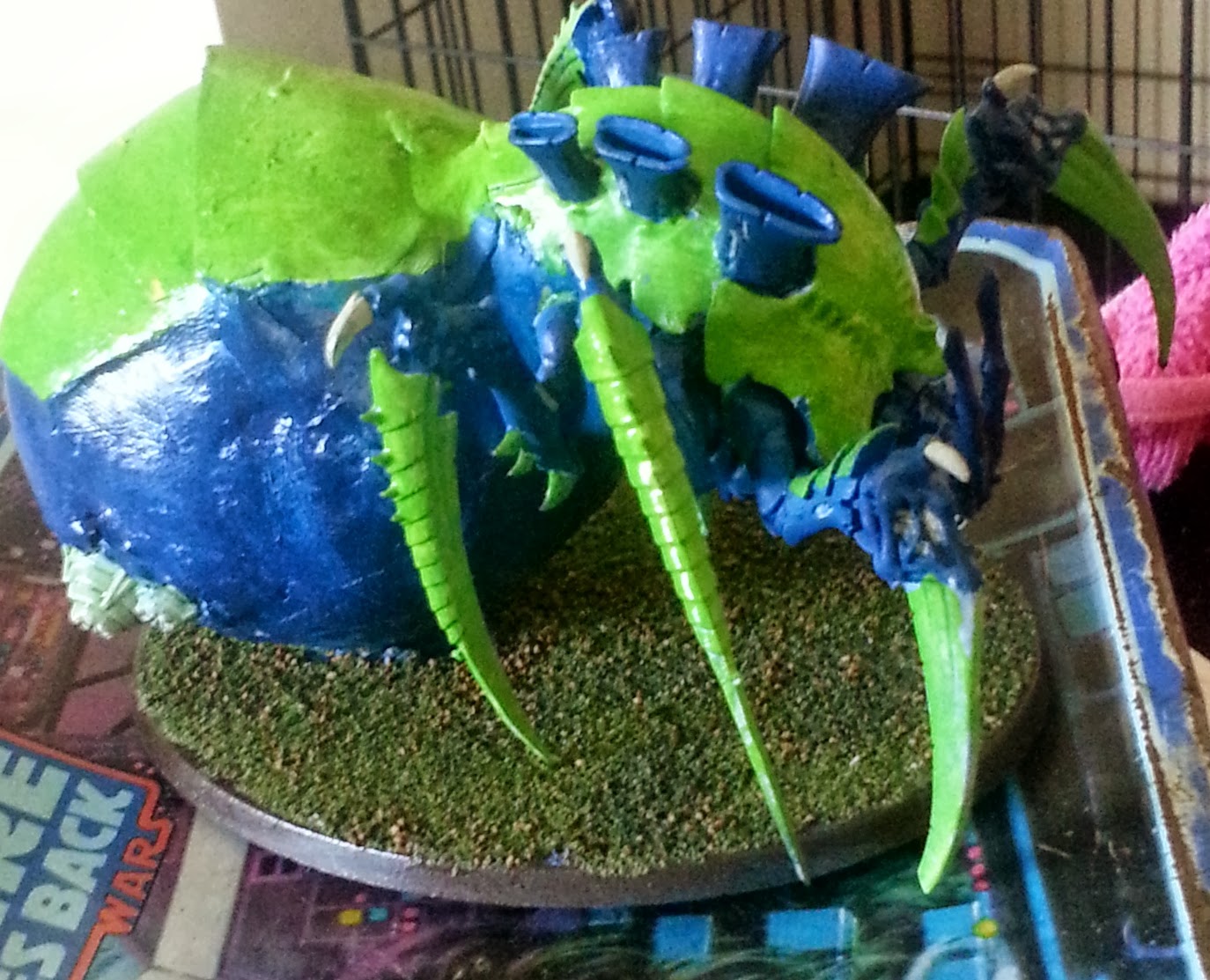 The big momma bug is still around and her big features are still around.  She can still be a troop (except now she needs 30 babies to do so) and she still makes babies in all the same ways. What she doesn't do now is pass on toxin sacs and adrenal glands.  This is not all that surprising since that was way over powered.  Now her babies will be the tar pit they were supposed to be.  Before they could wreck face.  One time I took out the great unclean one with some guants backup by a tervigon.
She still gives out counter attack and they even extended the bubble to 12".  The down side is when she dies the babies in that 12" bubble also suffer.  So it is a pretty even exchange.
She comes with scything talons now but it is pointless since all they do is give you an AP and since she is a monter she is already AP2. 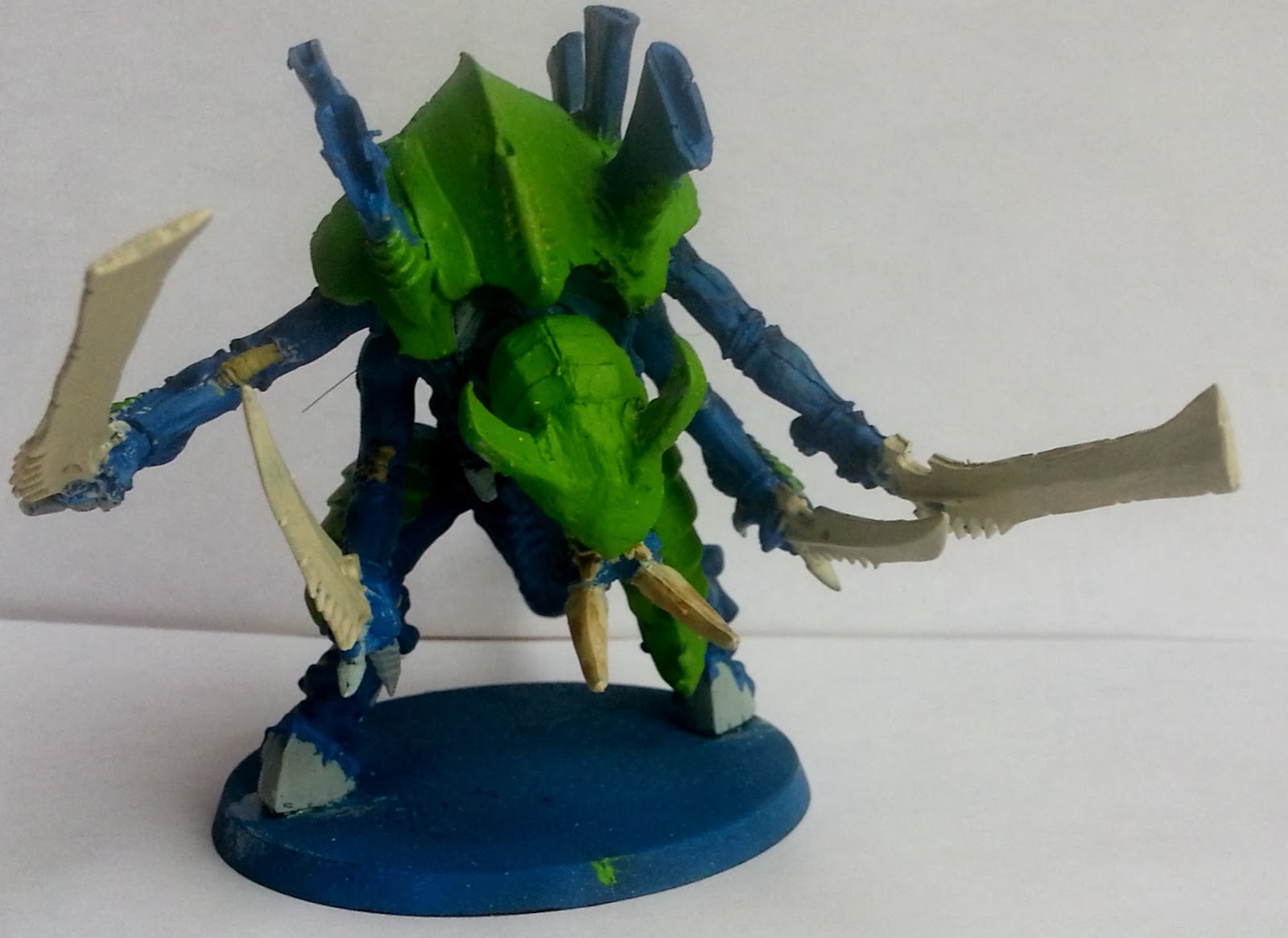 The head honcho is still around and he has had some minor changes.  First he gained a point in his balistic skill and while he gained a psykic level he only gets 3 powers instead of 4.  no big loss since he only has the tyranid list to choose from.  With his dual bone sabers he still have ID but he no longer forces rerolls of invulns, he still gets a 4++ in combat, and now the 2 sets gives him +1 attack. Lastly he always has the synapse extending trait.  He is still a solid leader and if you can get him into combat he usually will wreck face.

The prime is 50% more expensive.  I guess that to many people were using him.  I am not one of those people. He has all the options he used to but now he has access to flesh hooks. He used to be the inexpensive option but as I see it the tyrant is much better for a little more points.  With out wing options I doubt I will ever use him and still go with a tyrant or tervigon. 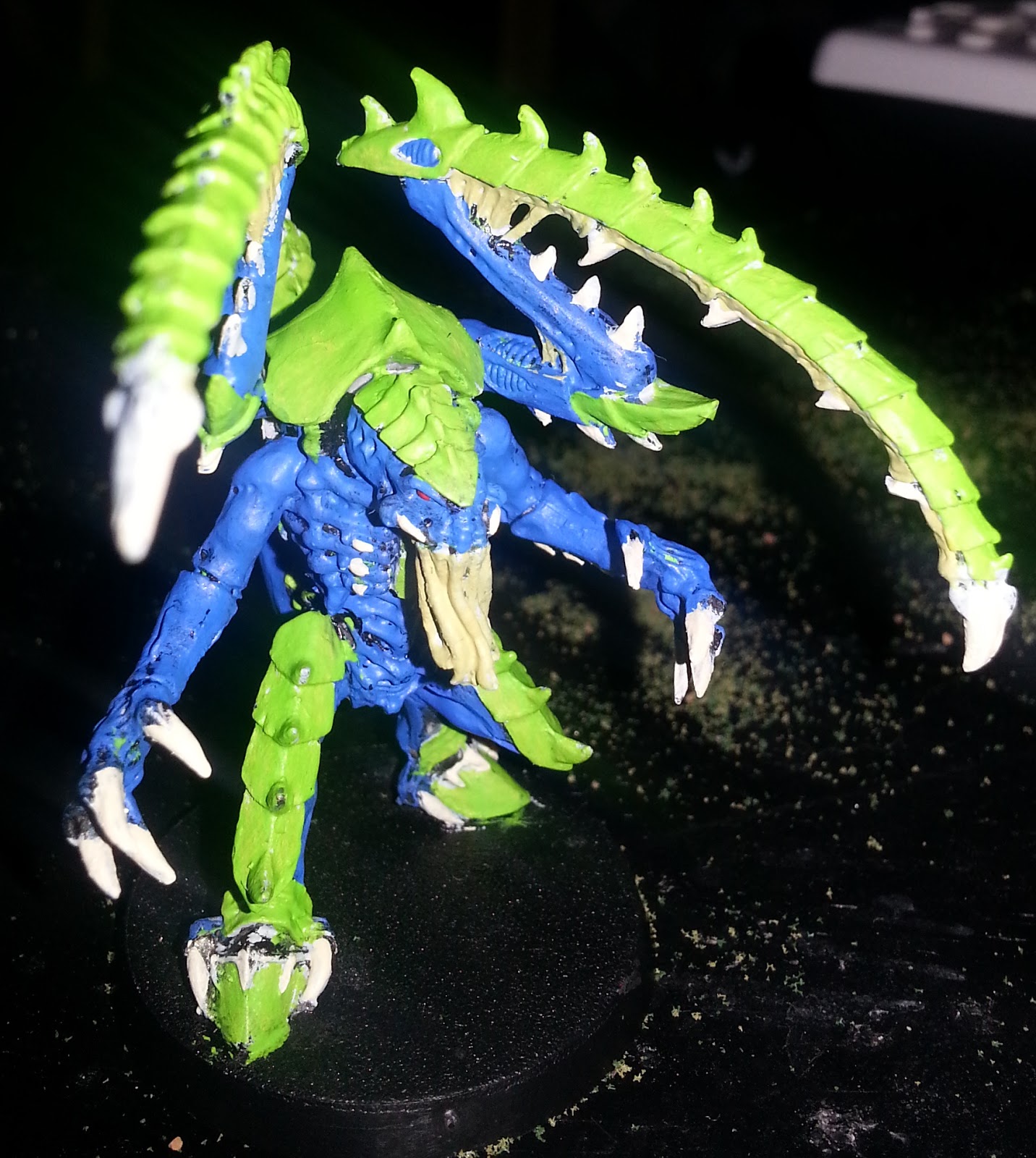 The Deathleaper has moved out of the elites section into the HQ.  This gives us more room in eiltes for all the good options there.  He did lose some fluff rules and lost the improved rending.  They changed "where is it" to force people to snapshot at him. It might help him survive a little bit. He still gives the leadership debuff which will help stop some psykic powers. 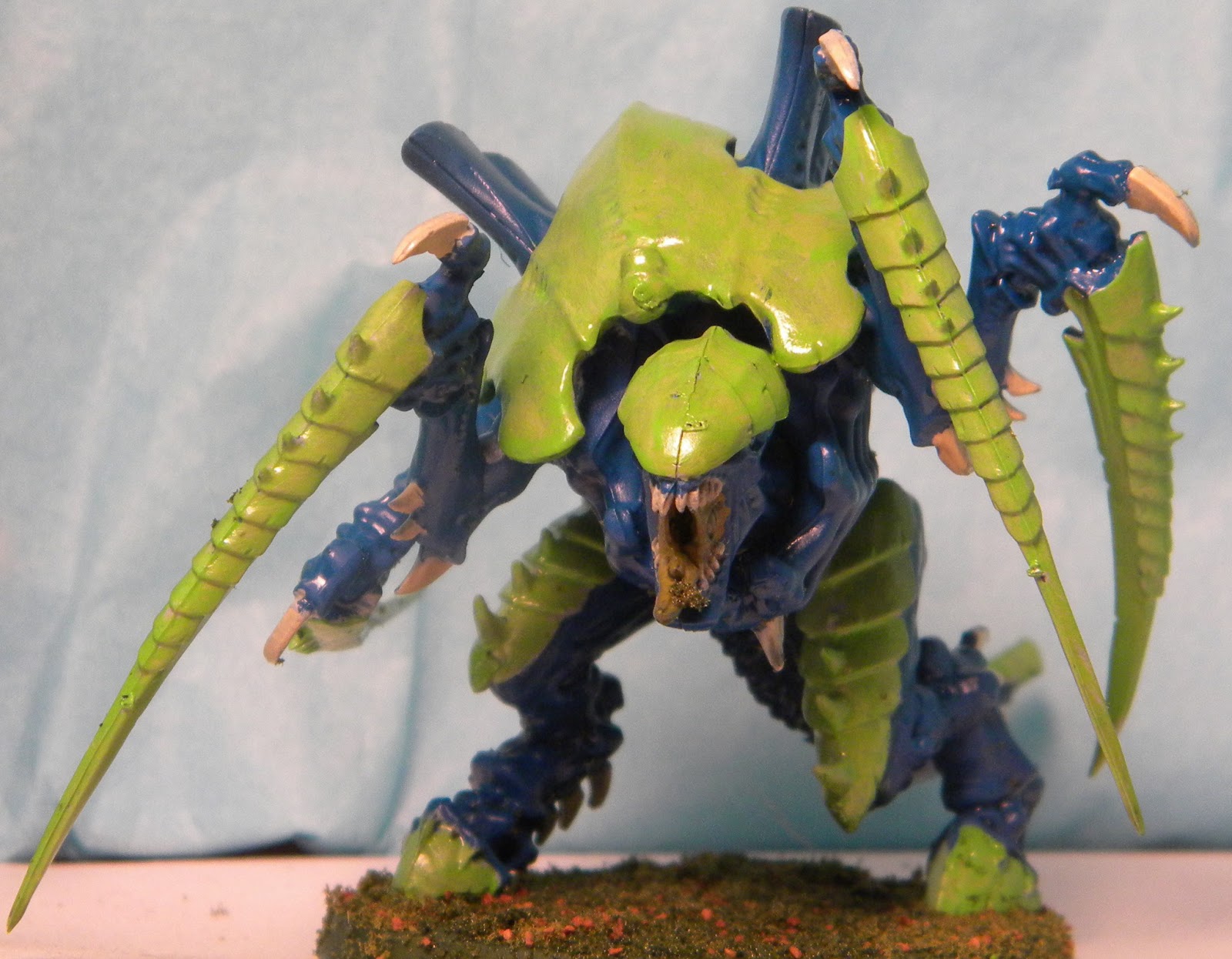 This carnifex is now an HQ.  No synapse and a ld 8 will make him a challenging warlord to use. They did give him a higher initative so nolonger being punked by powerfists and the living battering ram rule now give him more hammer of wrath hits.  His crushing claws are fluffy but not neccessary.  If you want to field 10 carnifexs now you can.

Yesterday I talked about most of the changes that can with the new codex.  One of the one I forgot was regen. Before with regen you got to roll a die for each wound you had and on a 6 you got the wound back.  Now if you are wounded you get to roll a die and on a 4+ you get 1 wound back.  Over all the chance to get a wound back is better but I have had a few games where a tervigon went from 1 wound back to 5 wounds thanks to some lucky rolling.  Over all if you get to use the regen rule you are lucky.  I have read a strategy of taking a tyrant and some guard and letting the tyrant eat some wounds then pass off wound to guard while trying to get the lost wounds back through regen.  I might try this.

Overall the changes to the HQ are even or slightly better than the old codex.  Teh tervigon got the expected nerfs and we got a few fun HQs.  If you run a genestealer list or a warrior list then maybe these HQs are for you.  I just don't see me being that person.