As I said in my last post I got a game in with a good friend, Chosen1 from Team Snake Eyes.  Before the game we got our armies out and had or usual smack talk.  I said how much I would be dying and he said how much I was going to stomp his face. We both have huge egos and are always full of confidence. 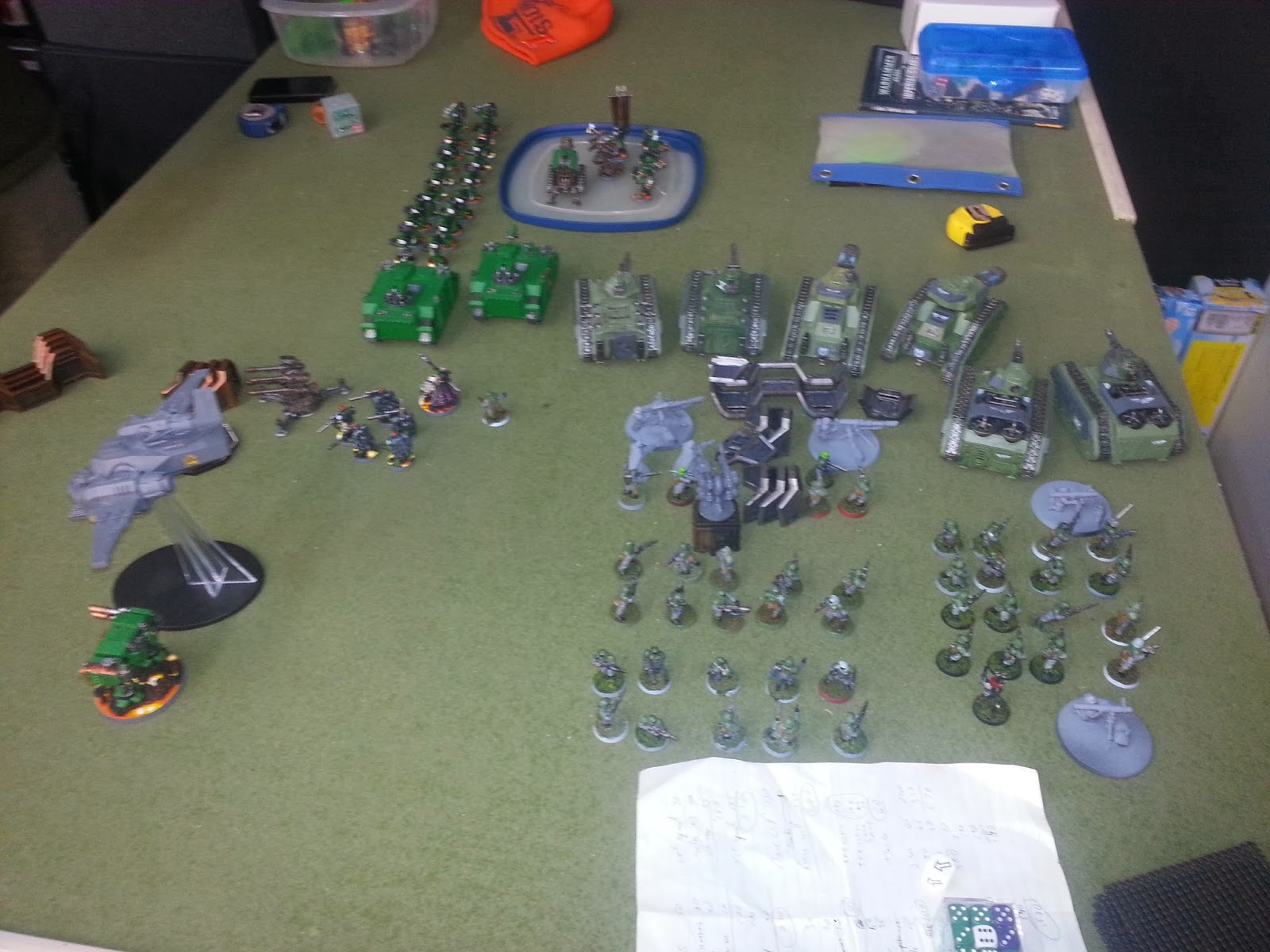 Next we roll for game, deployment and first turn.  We roll Emperor's will and vanguard strike. Then he won the rolloff and deployed his forces.  I deployed mine.  He offers me steal the initiative and roll and win.  First turn is mine. 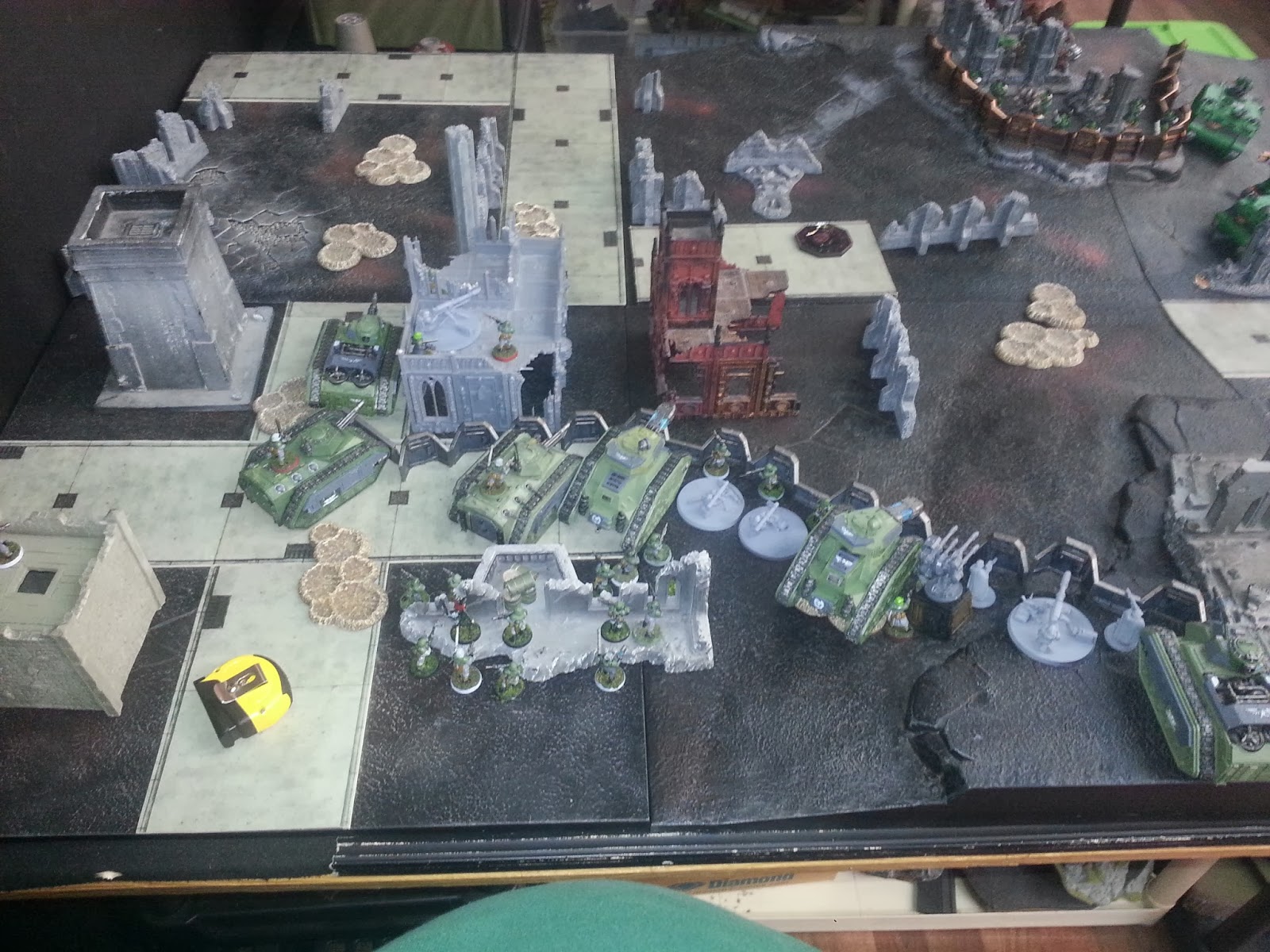 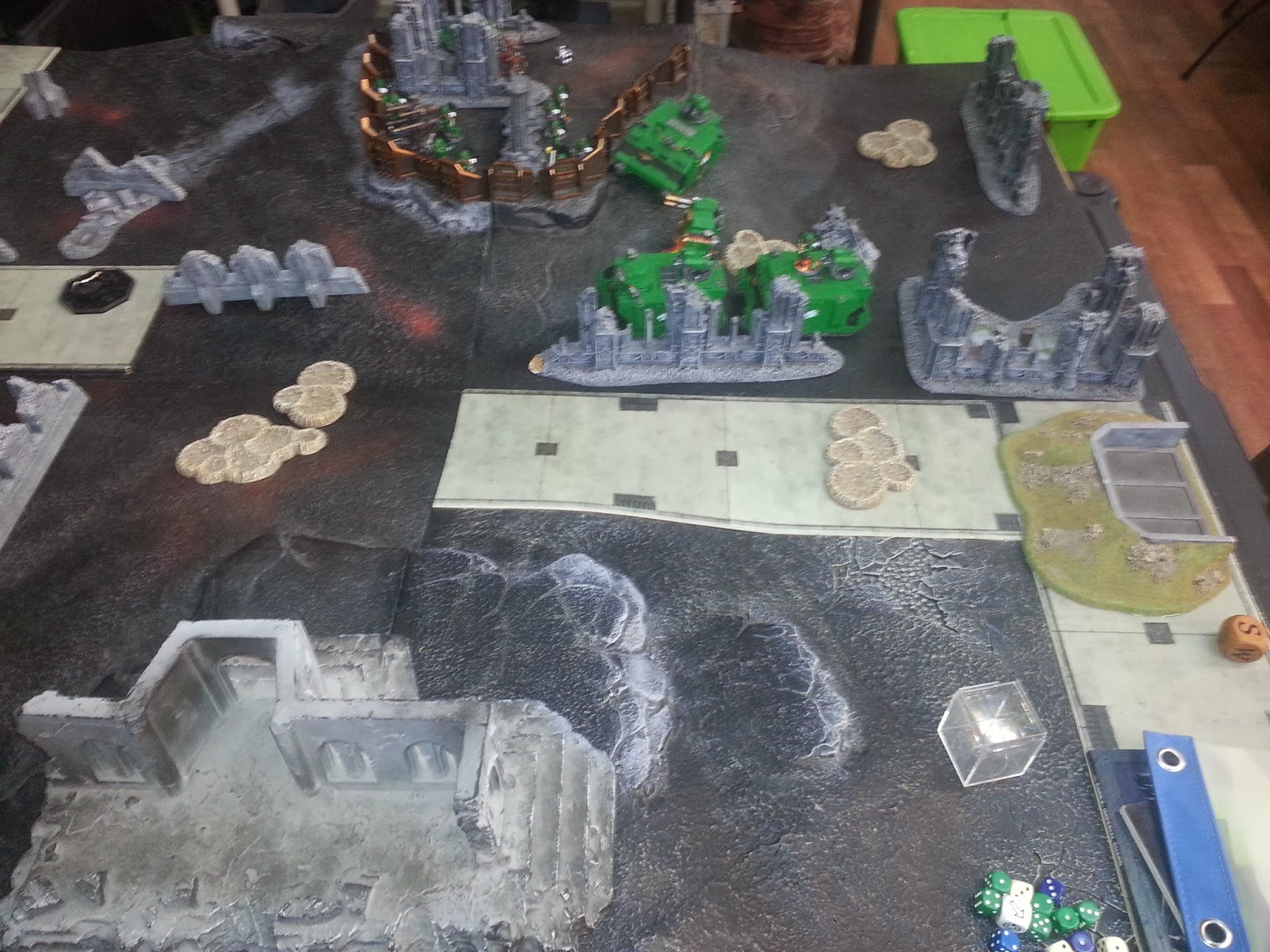 I move up my tanks hoping to get them in range. I did not plan everything correctly since one Russ was in between buildings and had to forfeit its shooting.   Mistake 1.  In the shooting phase I forget orders.  Mistake 2.  I forget to fire the master of ordnance. Mistake 3.  I did take out his quad gun and a razorback. 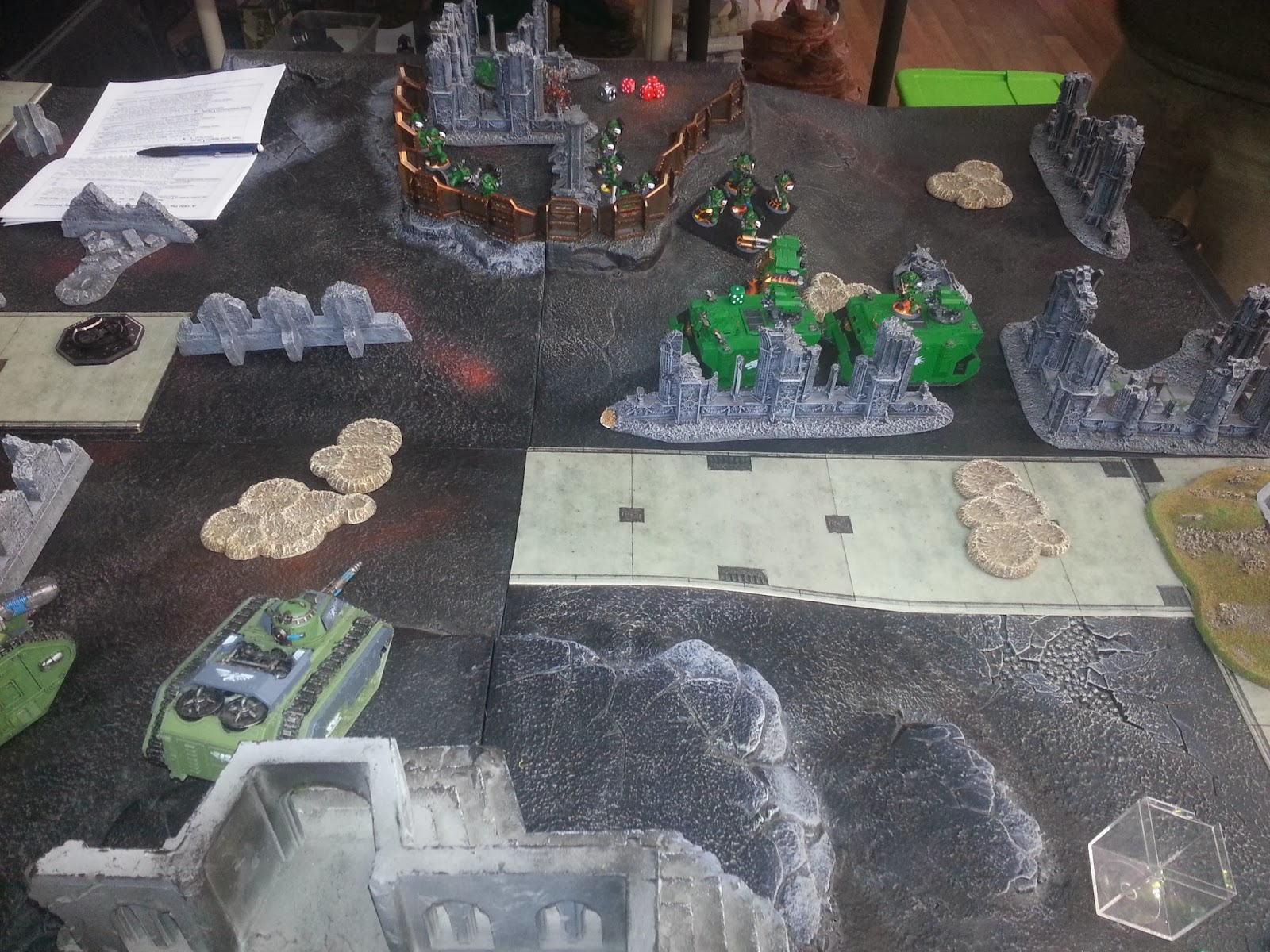 His turn he kills all of my Company Command Squad except the commander himself. He takes a hull point off the bane wolf and shakes it. He despairs about the death of his army. 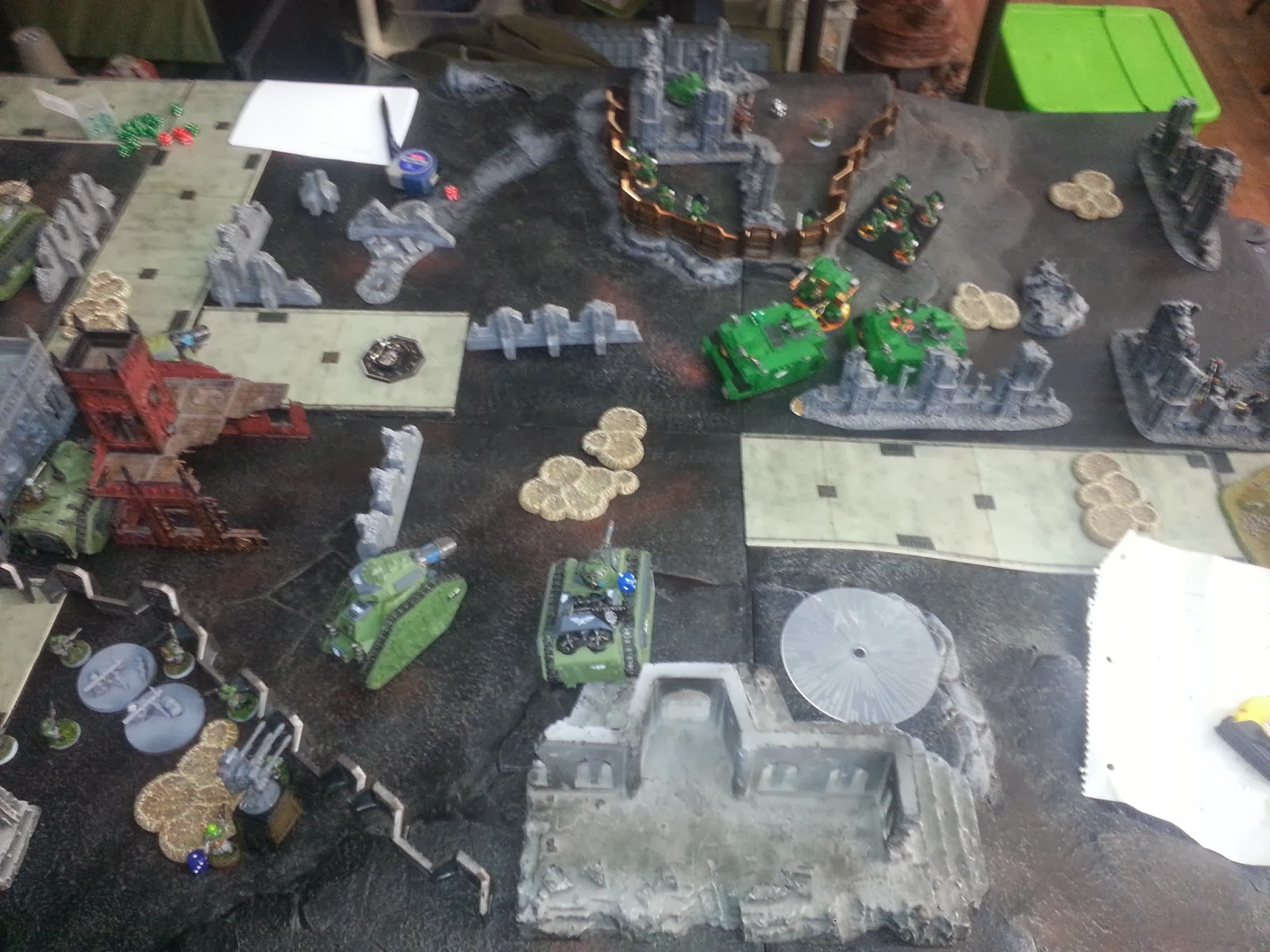 Turn 2
Marbo comes in and kills 4 out of 5 marines. I kill another Razorback and a couple of marines in another squad.  I also Immobilized my good bane wolf on some terrain in a way where not even its heavy bolter can fire.  Doh!
on his turn his plane come in and blows. I intercept and only do nothing. Sigh.  He immobilized his last razorback. He blows up my bane wolf and Marbo and still swears that his end is nigh. 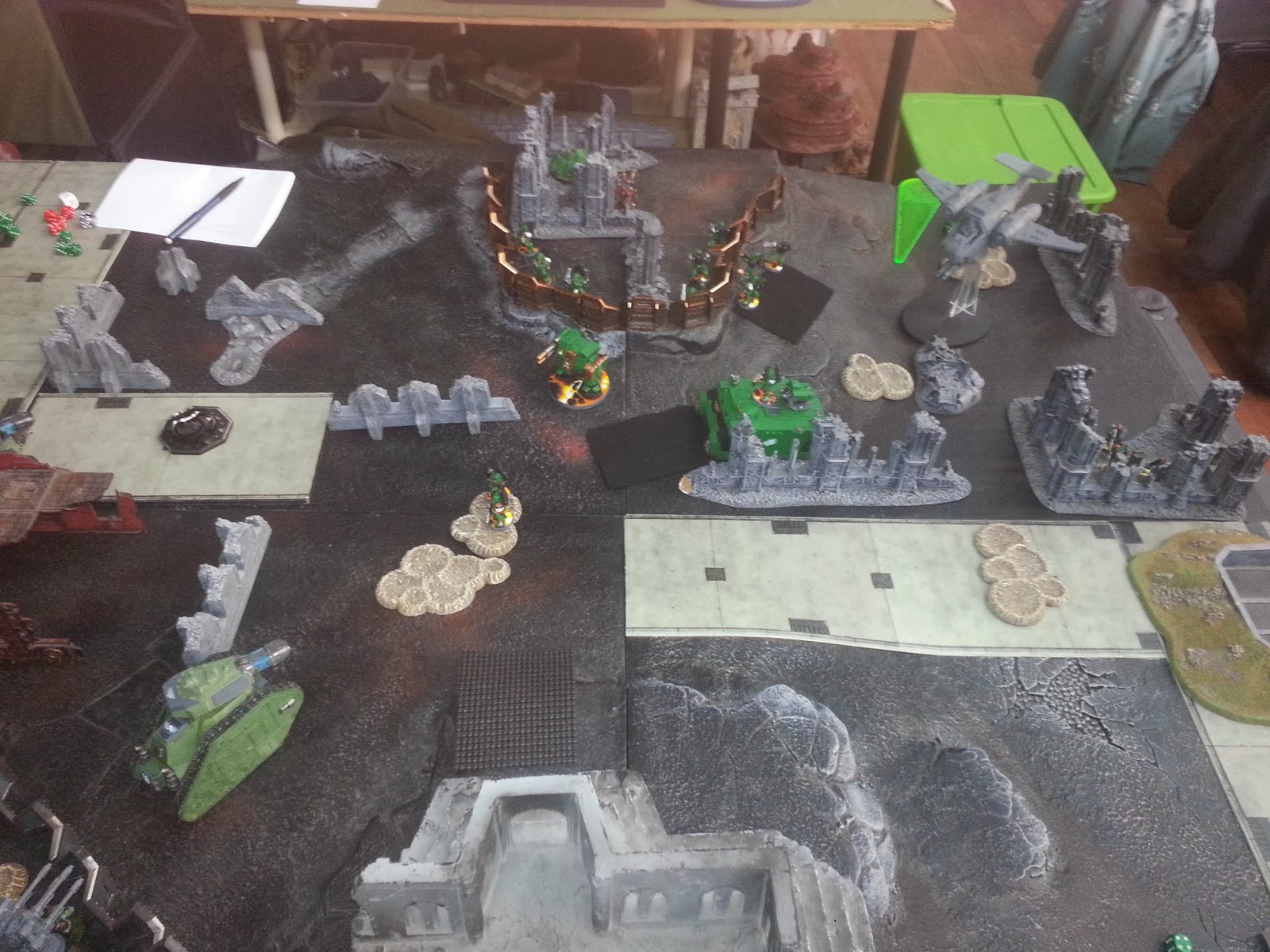 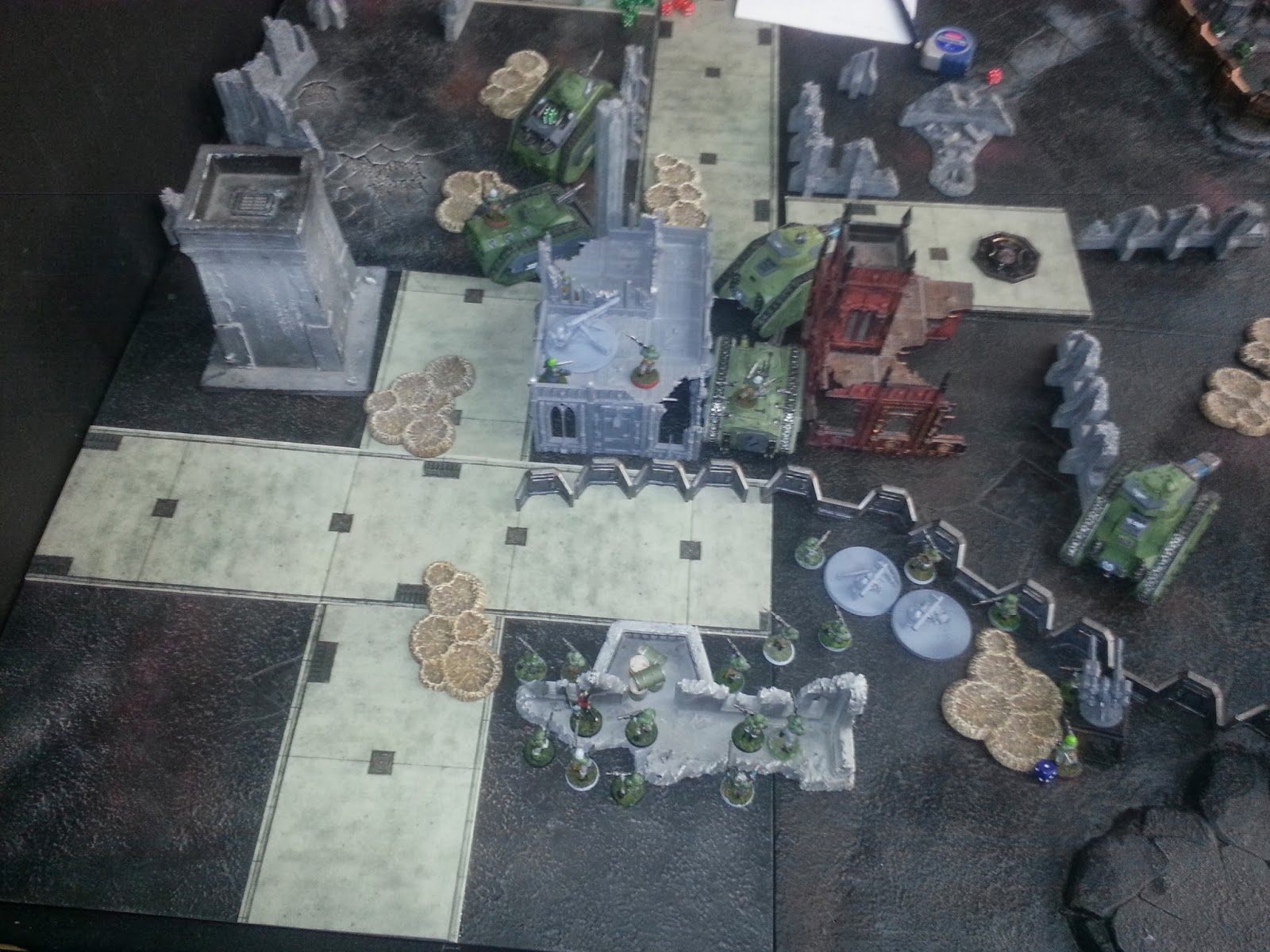 Turn 3
My shooting is ineffective I think I do a hull point to his dread and kill a marine.  going to ground behind his defence line is saving his bacon.
He take the cannon off one Russ on his turn as Vulcan starts the long walk to my zone. He is not so confident on his demise now.  He kills my warlord so now we are tied.  she needs to get linebreaker and remove my linebreaker to win.  His thunderfire cannon thins out my blob. 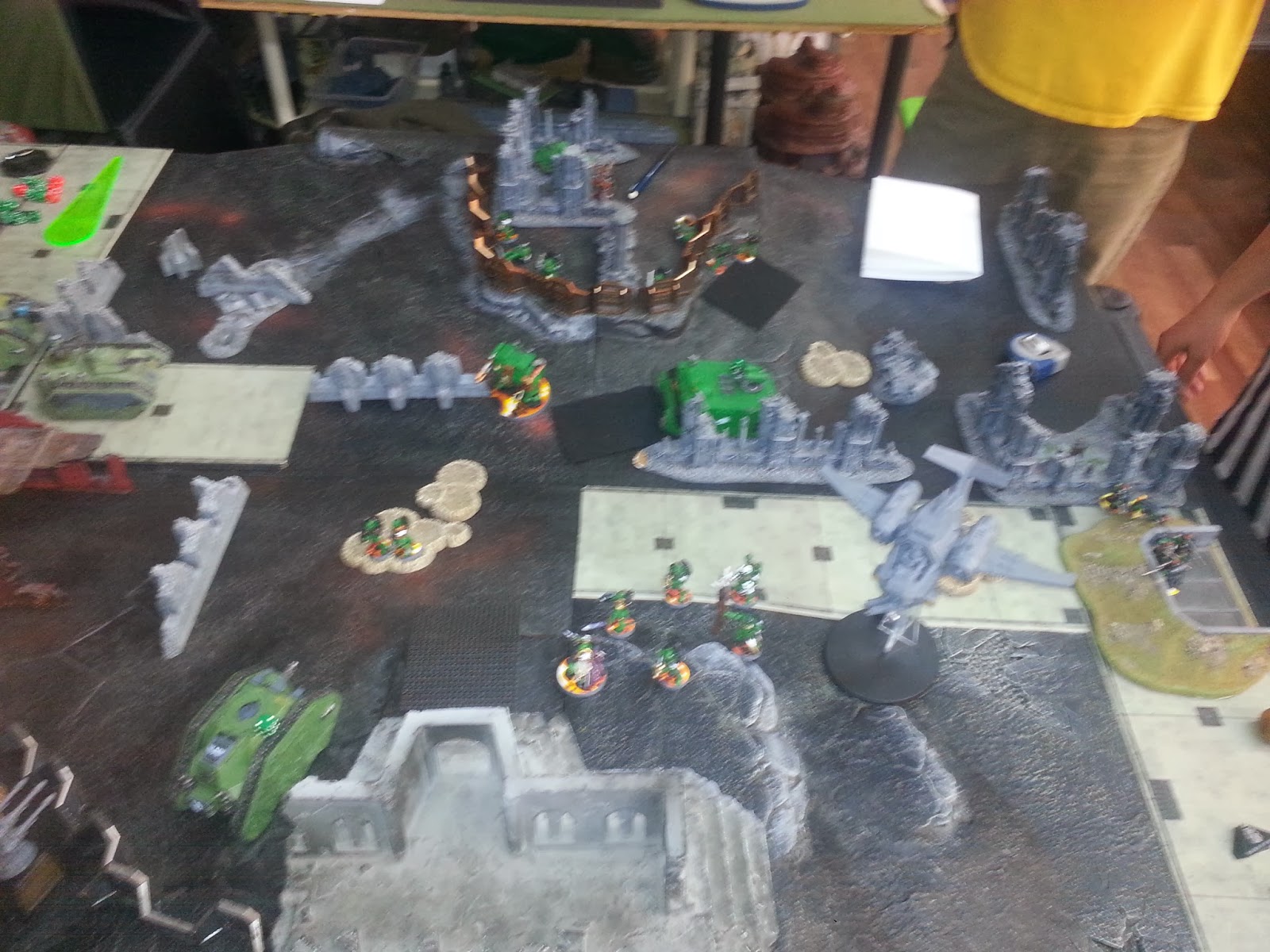 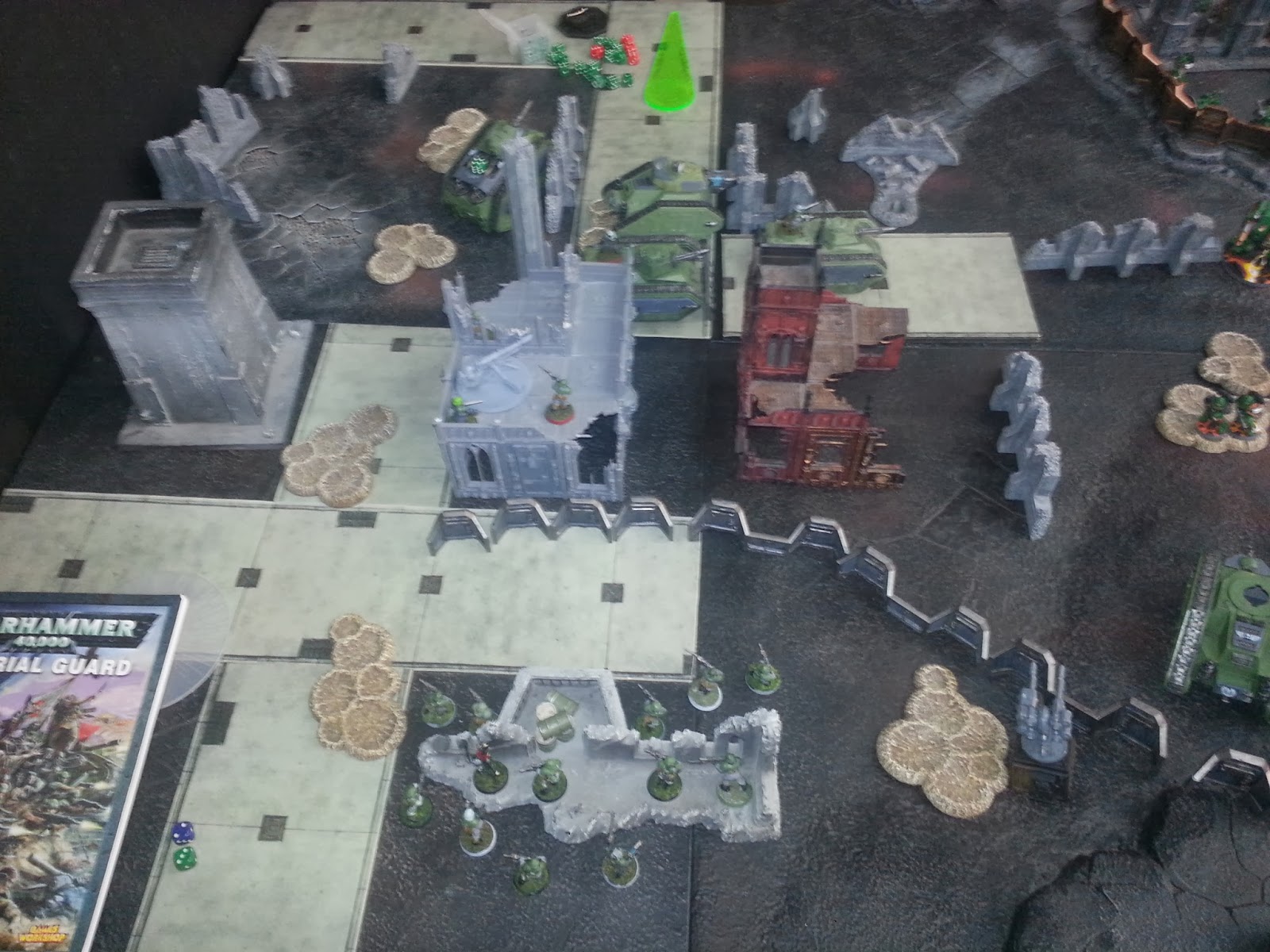 Turn 4
I remember my orders.  I move up my tank full of melta and do nothing to his Dread.  I put a wound on his thunderfire cannon I see my downfall eminent.
On his turn he move Vulcan forward then wrecks 1 chimera the guys pile out. He aims the thunderfire cannon at them but drifts horribly.  he then proceeds to walk it back up the side of the other chimera. It blows killing 3 of it's squad and a handful of the other squad. 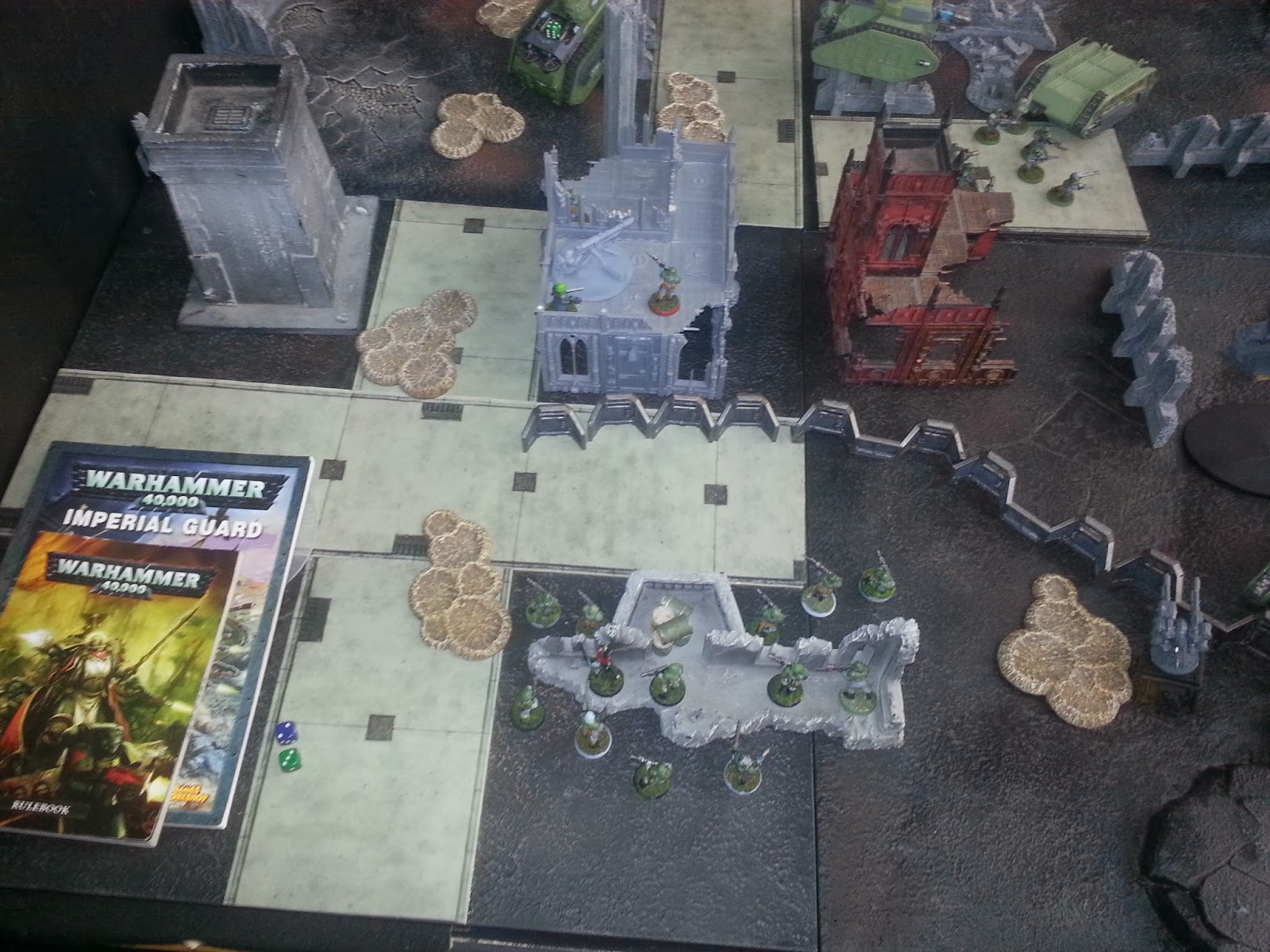 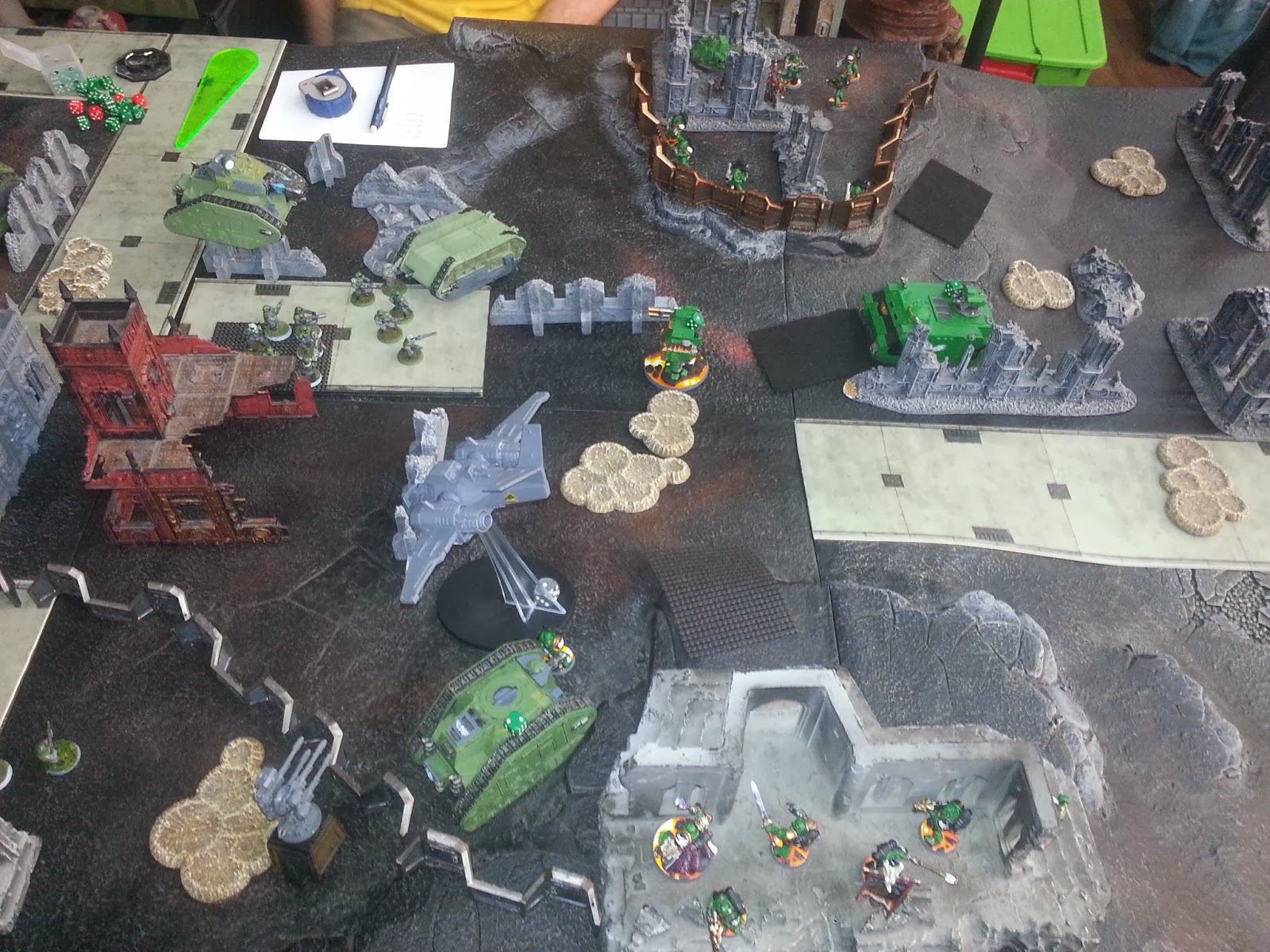 Turn 5 and the end.
At this point the only way for me to win is to keep him out of my deployment while hoping my Russ can survive.  I poor all the fire I got into Vulcan's squad and I kill off 2 not enough. 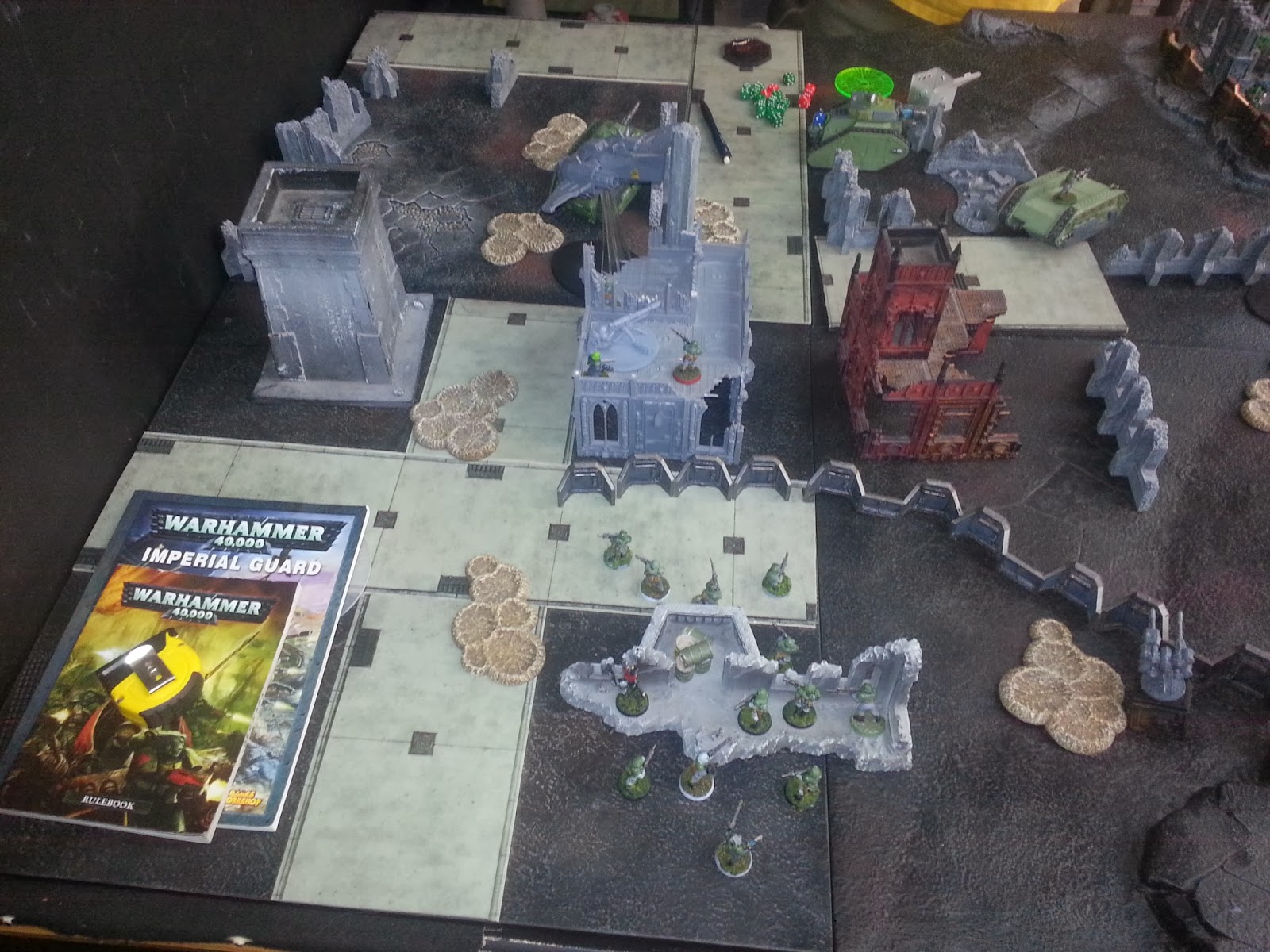 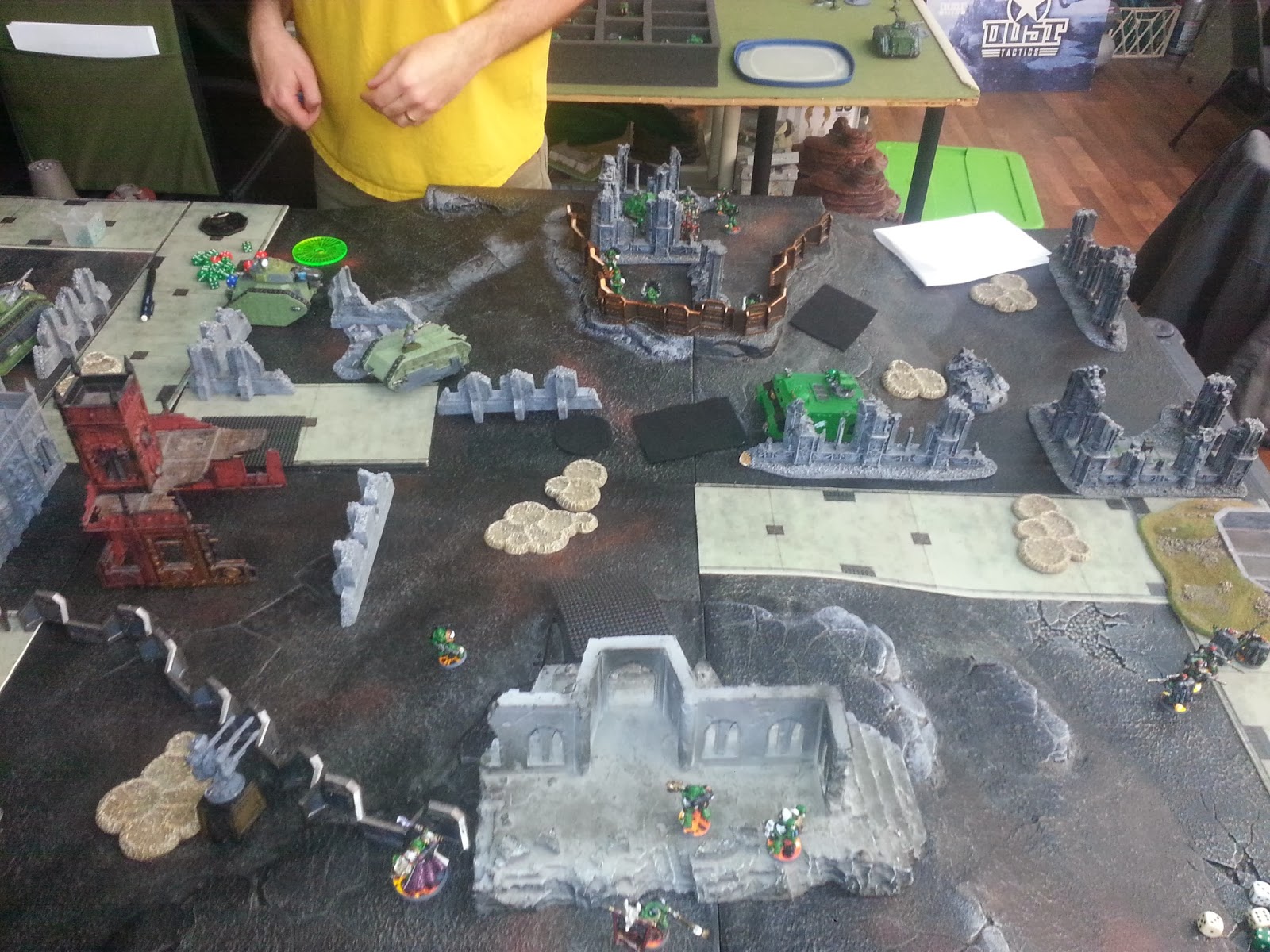 he then proceeds over the next few turns to kill the rest of my tanks and and get into my deployment zone.  I think we would have had a draw at the end of 5 but we went to turn 7.  He was shocked but I knew what was happening.  It is the same thing that happens with my IG.  I start well but as the game goes on I get less and less effective. 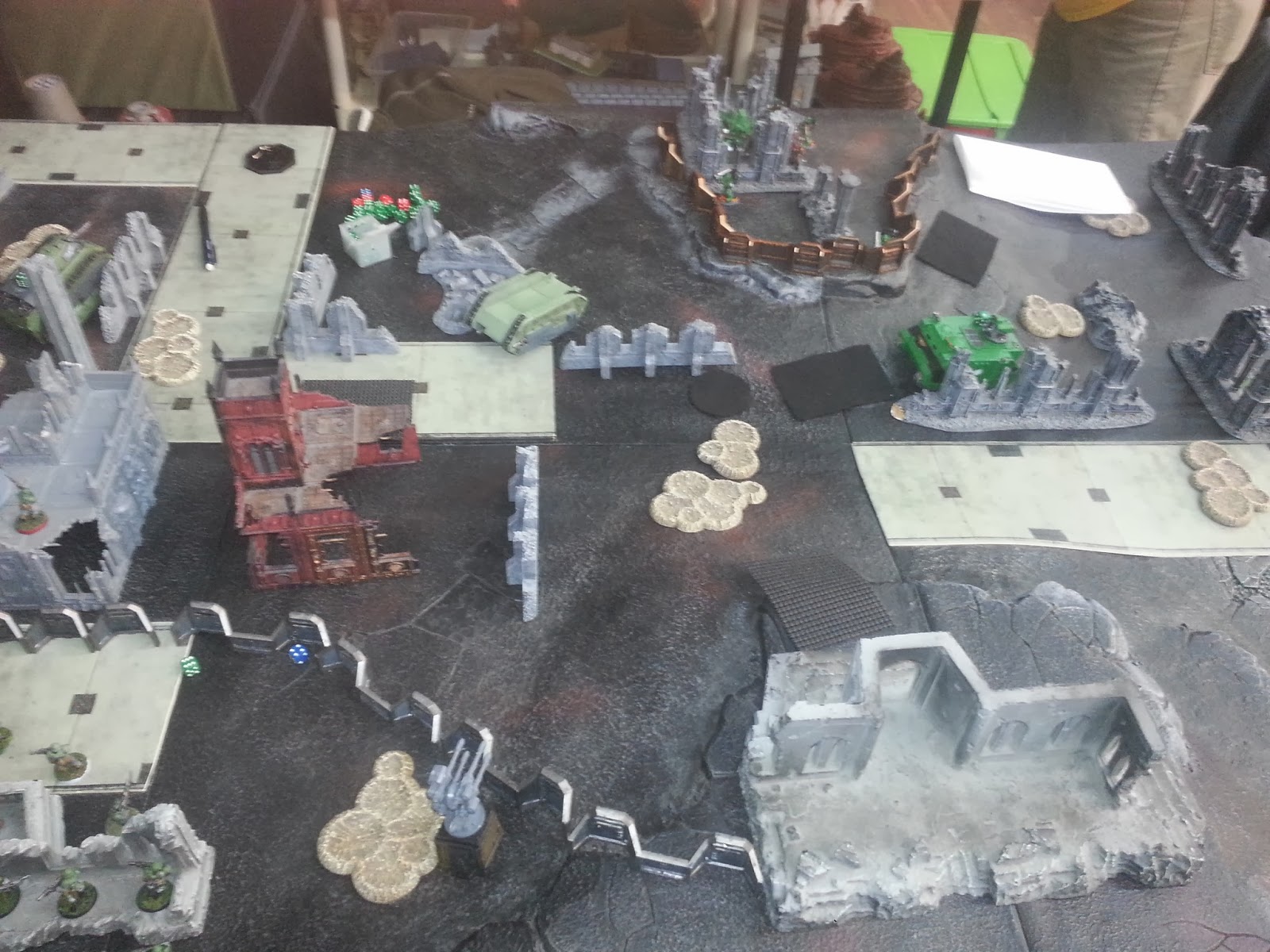 We talked about armies and strategies.  He didn't like his missile launchers. I suggested using a different razorback but I am not sure if that would have helped.   His command squad really didn't do much.  They looked awesome though.
On my side.  I just can't hit with blasts.  The plama Russ is awesome on paper but I was drifting 7"-9" on each shot past turn 1.  I like the bane wolf it is a scary tank if it can get there.  That is the problem.  I might switch out to a Hellhound since it has the torrent ap4 flamer and maybe can hurt some tau. Or I could have outflanked them hoping for a good roll and catching him off guard.  I will have to play around with that idea.

Over all I had a great time.  I hope he enjoyed the game.  Up next I continue my review of the nid dex.