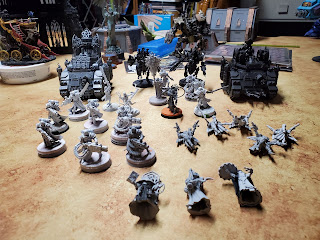 So I have been working on my Sisters of Battle for a while now and it is time I take stock and see what is left. Warning! there will be a lot of photos of unfinished models coming up.

Let's start with the standard sisters. 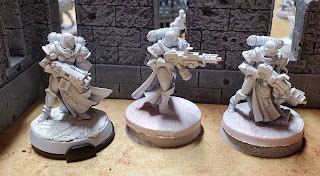 While these could also be Dominions I consider them to be just special weapon Sisters.  So two flamers and one stormbolter... not a bad start.  Tally: 3 models

Next up are the Retributors. 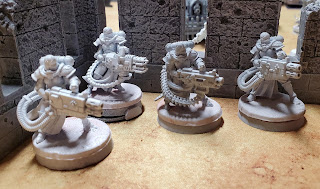 I could have counted these as standard sisters as well but I felt that I built these with the intention of making Retributors. So, lets count them as such. Here we have two multi-meltas, a heavy bolter and a flamer. Almost a full squad to finish.  Tally:7 models

You can't have a squad of Sisters without their Superior. 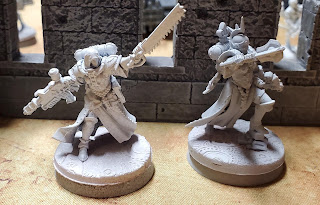 I have two of these models to finish up.  One is from the Retributor squad completing that squad. I also have another Superior with a combi-flamer and chainsword. Tally: 9 models

Once you have some troops, you need some leaders to lead them. 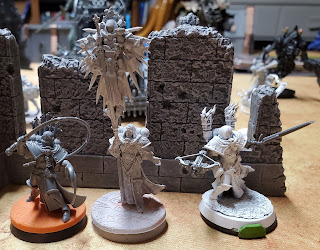 This trio rounds out my elite choices as well as adds another Canoness as an HQ. First, is a Mistress of Repentence, followed by an Imagifer.  Lastly, we have a Canoness converted from the big box Mistress.  I like the look of the condemnor boltgun and who does't like swords Tally: 12 models.

The Mistress needs some Repentia to boss around. 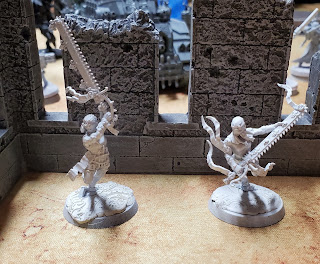 These are the last two from the big box.  I have 9 more unbuilt waiting for their base toppers before I build them.  Tally 23 models

I also have my Seraphim squads to work on.

This first set is the original five from the big box. They are almost done.  I need to do their jetpacks, base rims and a few odds an ends like grenades and ribbons. 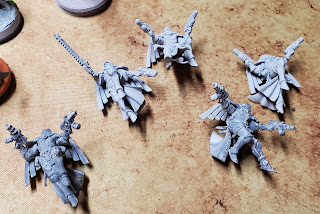 These five still need to be mounted on their stands and then painted.  There are 2 hand flamers and 2 inferno pistol along with a Superior. Tally: 33 models

The last foot soldiers I have are three Sisters from St. Katherine. 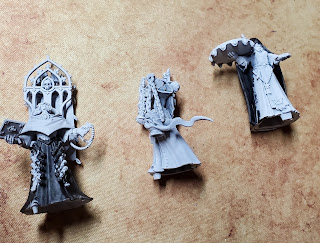 My hobby butterfly just fluttered away before finishing these models.  I should get back to them so that model can me finished. Tally: 36 Models

With the foot soldiers done, we have the the war machines to work on. 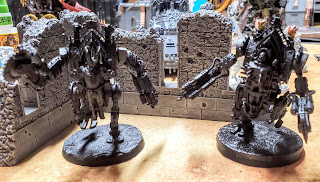 The first are my engines.  Although right now I run them both as Mortifiers one technically is a Penitent Engine.  I like the special rules for the mortifiers better than for the Engines. When they die the have a chance to deal mortal wounds to enemies around it as well as make it heavy bolters assault or flamers pistols.  Seeing that I always want to keep them moving the second option is key. Tally: 38 models 2 vehicles

I still have a few tanks as well to work on. 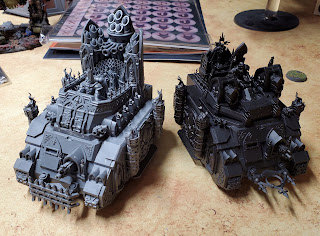 The first one is a new Exorcist followed by an Immolator.  What is not pictured is an old school Exorcist that I am still working on.  Once built I will paint it as well to finish out the trio of pain.  I will probably get another Immolator as well.  but I don't have it yet, so I am not counting it. Tally: 41 models 5 vehicles

Lastly, I have the battle sanctum to paint. 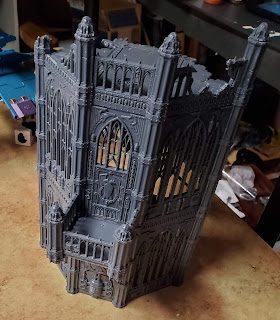 This terrain is a bit daunting like all terrain is for me.  I just have to suck it up and paint it.  It really should not be too bad. Tally: 42 models 5 vehicles 1 building

That is it.  There are quite a few models left to paint.  In total I have 43 models painted with two vehicles, one piece of terrain and the Triumph of Saint Katherine.  I only counted that as one model painted but in reality I should call in unfinished and count the three sisters I need to finish on it as one model. If we factor in those changes then I am still over half way through with 40 models left and 42 models painted. 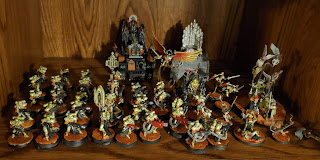 I really thought I was closer to the finish line but those repentia and seraphim are a big chunk or what is left. I guess the good news is that I am over the hump and coasting downhill now.  Wish me luck.

Stay safe and have a good weekend.