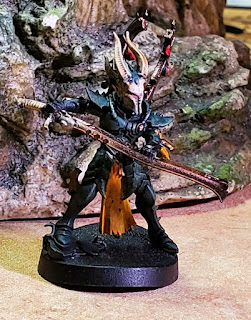 Today I show off a Dark Eldar Incubi.  Lets take a look.
For those hthat have been with me a while (around 2012) might remember that I once had a Dark eldar army.  It was a bit finicky to play and I decided to sell it.  While I don't regret selling it, I do miss some of the models.  One of those were the Incubi. Now that GW has cool plastic versions of these I just had to get some. 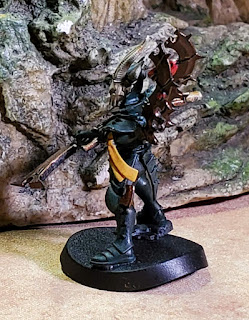 I went with a dark green armor using Caliban Green with a Waaagh Flesh highlight.  I then used yellow for my secondary color, using Averland Sunset with a Flash Gitz Yellow highlight.  The metal was done with a Warplock Bronze, washed with an Agrax Earthshade wash, and a final highlight of Balthazar Gold.  A few finishing touches here and there, the face was the new Skeleton Horde Contrast paint with a Earthshade wash and finally I used Leadbelcher and Maphiston Red on the trophies. 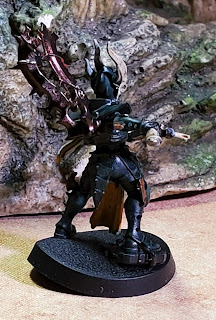 I somehow managed to warp the base so I will need to fix that. I have to figure out a basing style for my dark Eldar as well. I have four more incubi to paint as well as some scourges lying about. I think I will take my time with then and use them as a pallet cleanser.
I really liked this guy and thought about doing a Dark Eldar kill team but that is just to much money to be put into a side project that might get played only a couple of times.  I think just painting up these guys will be enough for the Dark Eldar itch.
Next up back to the Sisters.
Questions? Comments? Pew pew pews!
Posted by Grenn Dal at 1:05 PM