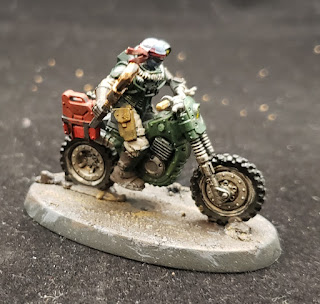 While the Blues have had a hard time getting things finished, I did not.  Over the weekend I was able to finish painting a few models. 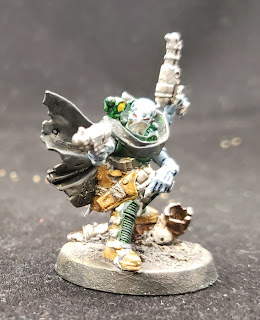 The first model I wanted to work on was my reprimed Kelermorph. 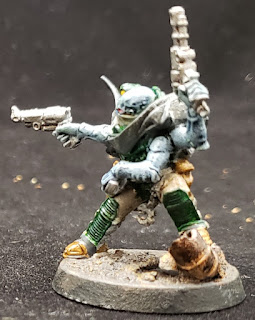 This time, I decided to prime him with the more reliable white primer.  This is a bit odd since white is the primer that people usually have trouble with.  When the model was finished, I can't tell which primer color I used. The only thing odd I noticed was the green armor looks a bit off.  This could be blamed on the paint being from an older paint pot. 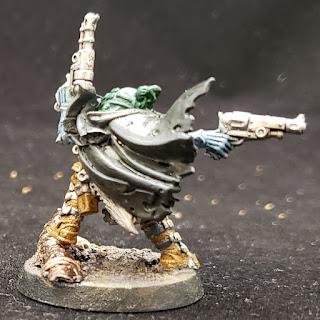 I am really happy how he came out.  I am going to replace the Sanctus and see if he can do any better. In my last game the Sanctus maybe did 2 wounds the whole game.  It was just not worth the points. 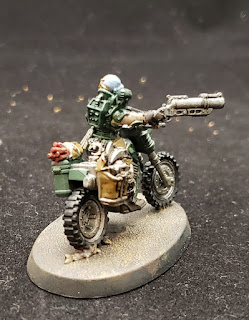 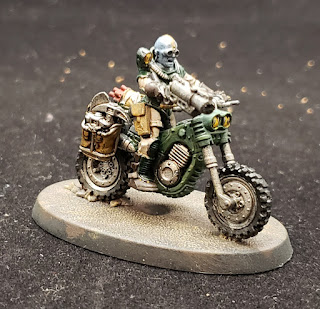 I continued to work on my Atalan Jackals. These two make number five and six.  I have anotherone with just a base left to finish and one that is about half way done. These two are standard Waaagh Flesh green bike with Caliban Green armor for the rider. One has a grenade launcher so it is a bit special. 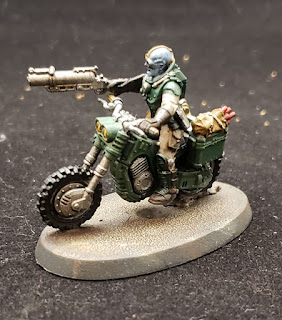 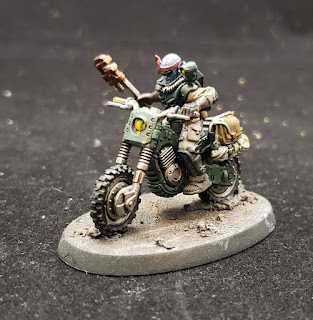 I have thought about how to load out the jackals.  I think cultist knives and demo charges.  So for every 4 I have a grenade launcher for some extra oomph, the demo charges for the surprise attack, and a cultist knife for so extra staying power in close combat. I am toying with the idea of equipping them with another laspistol instead of the knife. The knife will give me an extra attack in close combat but the pistol will give me a second shot in the shooting phase.  Since it is a pistol I can use it in close combat still giving me an extra attack.  The only time a knife is better is on the opponents turn. I need to think this over. 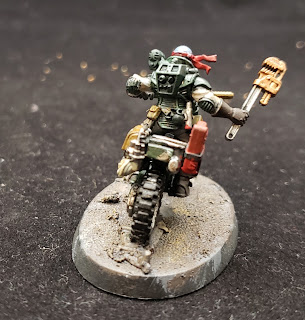 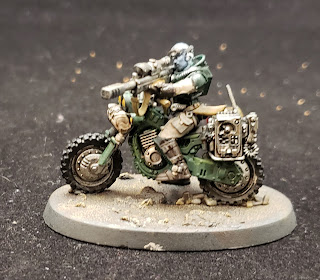 I pretty much painted her by the numbers.  The rifle strap was a bit tricky since it wound around the gun, arm, and body.   The rest of the model followed the standard recipe for the other Jackal. 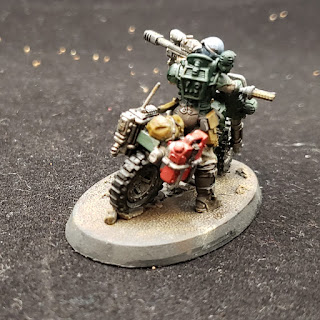 The Alphus on the field performs pretty much as well as the Sanctus.  The main difference is that she can help out the shooting of nearby units.  This is nice since most Cult units hit on a 4+ a plus 1 to this makes a big difference to those mining lasers. She is also pretty quick so she can grab an objective when you are getting desperate. 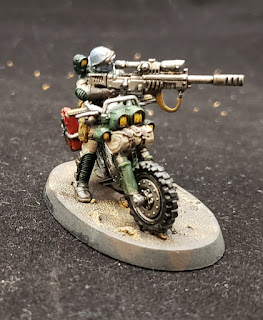 That is all I got done this weekend.  I am hoping to finish the last two from this box and maybe starting the Wolfquads.  IT will be nice to take these off the queue.


Have a good week.