Did a quick count for the year in the war on grey plastic. Here's the Current Count  according to my KanbanFlow board.

So by my count, that's about 73 models in the war on grey plastic. The best news in this is that the old school and chaos cultist models, plus most of the Primaris guys are a dent in the Closet of Shame - which is actually looking more and more empty as the weeks go on.

If you add into this the fact I completed my first entire scenery commission for the Mars Board in March, which took up the entire 1st quarter of the year, I've made some good progress! So where to go from here?

1.) Finish the Thousand Sons List - I have ten built Kairic Accolytes that will be counts as Tzangors, plus ten more unbuilt. I want them finished by November so I could use them, if needed during Shorehammer in December.

2.) Finish the Black Templar List - I have the last four intercessors to finish, and may be getting a Lieutenant to round out the leadership grouping. So maybe 5 more models, then I have a finished list. 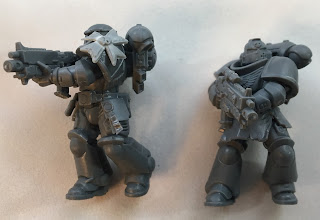 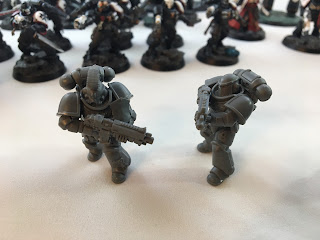 3.) Participate in Hobby Challenges - You should have already seen the post about Azarel's Technical August Painting Challenge, so I've been working on weathering my tanks and getting the last few lonely members of the unfinished tank painting club up to snuff.  (Griffon, Basilisk, Basilisk Carriage, Both Chimeras, and the Tauros Venator)

4.)  Build my Inquisitor Warband /  Kill Team - I've got an Inquisitor Eisenhorn and Inquisitor Lok waiting in the wings to be finished so there we go, plus a handful of leftover Karskin / Stormtrooper Metal Models waiting for some painting love.

5.) Figure out where this renegade list will end. Eek! I'm still throwing all the leftover guard models as it, but they seem to come out of the woodwork. Definitely finish the artillery crew, tank crew, and renegade command squad at a bare minimum, plus the  two other FW renegade psykers.

That's a long list. But It shouldn't be tooooo hard. Theoretically. We'll see how my progress goes! At the very least, number two and four should be doable in under a month or so.

Thoughts? I'd love to hit a hundred models by the end of the year!