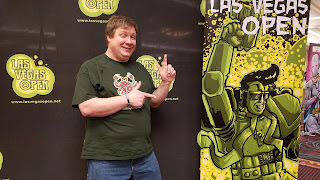 Hello All! I am back from the Las Vegas Open (LVO) and I completed all three of my goals. Today's post I will talk about and show two of my goals. In this post will be a lot of images of just a few armies I saw as well as some of the wargaming celebrities.

I will start off with the wargaming famous personalities that I saw. Early in the day I saw Reese from Front Line Gaming. Since this is his convention it is no surprise. I also saw Wargamer Girl Miranda talking with Quirk. I later caught up too Quirk during the day. He was well into his game so I didn't bother him. Atom Smasher from Tabletop Minnions was also walking about the vendor area. I was said I didn't see The Glacial Geek or Dave from MiniWarGaming but it was a big place. 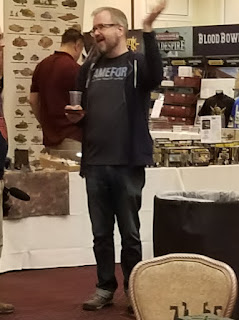 Most of the time I would just give them a respectable distance. I tend to be a bit shy and don't want to be a bother. I actually played against Dave though so I felt more comfortable approaching him. He is a great guy on top of it. Unfortunately I did not see him. 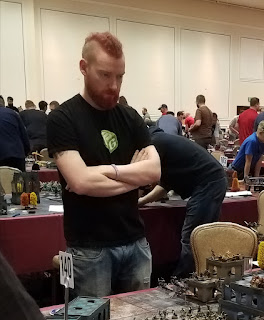 There were a lot of cool looking armies. I tried to take pictures of unique armies. There was a bunch of variation from Dark Eldar to Guard to Tyranids to chaos. There was even a few orks roaming around. What surprised me was the amount of fire raptors. I know the model is cool and strong but there were a few multiple fire raptor armies. The most I saw was five in one army. Crazy.

If that is not crazy I also saw a bunch of baneblade chassis. They also came in pairs or more. At least it would make your travel pretty light. 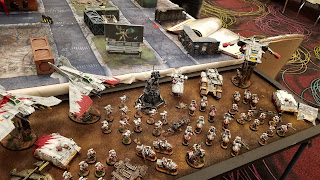 There you have it. My next post I will talk about what I got from the vendor area.