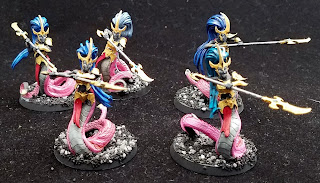 The last set of models I worked on this week was a squad of blood sisters.  With this squad, I almost have 1000 points of Daughters of Khaine. Let's take a look. 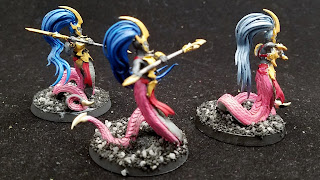 I wanted to paint these models up so I could use them both as an additional five sisters to join my already built and painted five or I could use them as a stand alone unit. While not difficult, I had to make some decisions. 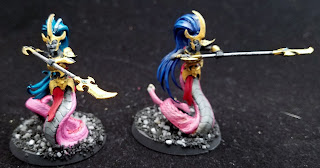 What I need is to make sure the leader can blend in with the normal sisters well enough that it is easy to tell which of the two is the leader of the big squad while also stands out enough when she is the leader of a smaller group.  I solved the first problem by not modelling like the other leader. The other leader is modeled with her arms stretched out: a heart in one hand and a spear in the other.  Modeling the new leader holding the spear with both hands, all the models have both hands on her spear except one. This way it is easy to know the one with the heart is the leader. 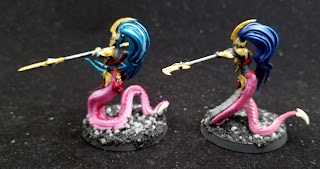 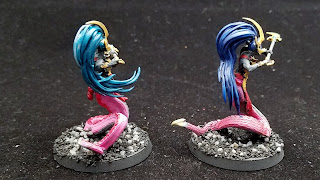 The second half of the problem was not as simple.  I wanted to make sure she stood out but not look out of place.  I decided to paint the middle scale down her body red.  Thisis easy to see she is different but not so much that she looks out of place.  I plan to go back ad to this with my other leader to be consistent. 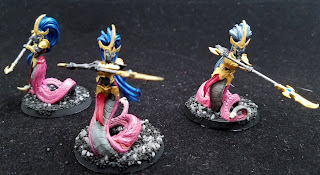 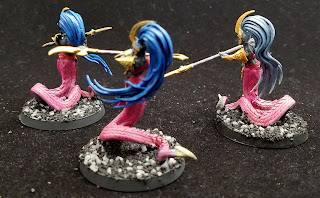 With this squad done I have completed my June pledge of a battleline unit.  July pledge is a behemoth.  For that I have Morathi herself.  It should be fun to get her painted up and ready for the table.  I also have a few other projects like my hive guard to work on as well. Wish me luck.

Questions? Comments? Hissssssssss!
Posted by Grenn Dal at 11:56 AM