My First Age of Sigmar Game 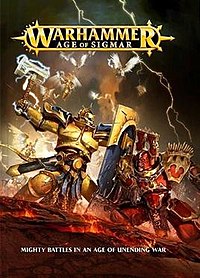 Last weekend I officially played in my first Age of Sigmar (AoS) game.  It was my 700pts of Daughters versus 700 point of tzhetch. Officially I won but my opponent could have won easily. I thought I would share my first thoughts and impressions of AoS.

First of all it was a pretty fun game.  8th edition 40k has a lot in common with AoS, so I was not completely lost.  I did forget the command phase a few times and the Daughters have a few different type of abilities that I am not sure I fully understand. The game play is more simple and I don't have to compare strength to toughness or any of that.  Once you figure out each of your units it goes a lot faster. 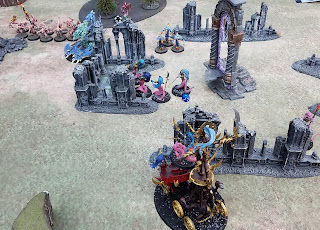 We played a mission where on turn 3 a star falls in the center of a random third of a board.  If you control it you win.  This feels a bit random. It happened to fall near my opponent. If the star fell on the other side, I would have won.  He was kind enough to ignore it to see if he could take me down without the, as he called it, "Cheeky" win. I think that this type of scenario is random and can be easily won by nothing more than luck.  I would like to think some generalship should sway the game. 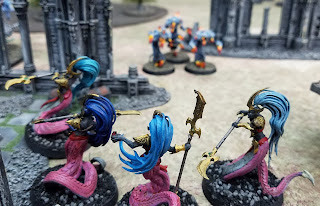 While the to hit and to would make the game easier and faster I am unsure if I like it better than 40k.  I like the fact it is harder to hurt a tank than a goblin.  I guess that is where armor saves come in.

Speaking of armor saves they seam to be a lot higher than in 40k.  I am sure there are armies that have a lower average but most of the armies seem to hover around the 4+ or 5+ range.  This make a -1 rend even more powerful. 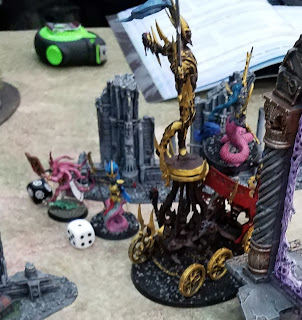 One thing I really liked was no overwatch.  You declare a unit that is charging and roll the dice.  You can charge anything within that roll.  You don't have to declare all of your targets and hope you get a good rool and weather the overwatch you just roll then pile into anything you can reach.  Very cool. 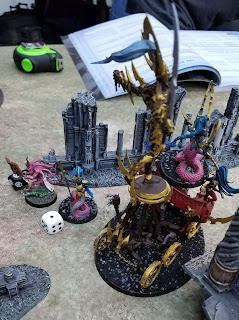 Age of Sigmar is a fun game.  It will not replace 40k but I will not be adverse to playing more.  My daughters will be looking forward their next battle.

Questions? Comments? Hisssssss!
Posted by Grenn Dal at 10:00 AM