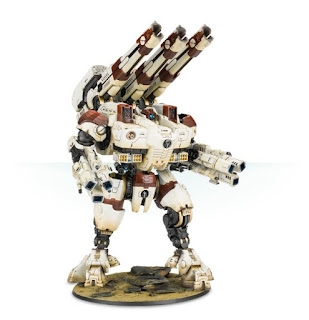 Wow oh wow are these rules harsh.
First of all, it is a gargantuan creature (GC). A lot of people were not expecting that.  With the 3 cockpits, people were thinking it would be a super heavy walker like a titan. Being a GC should make it a lot harder to take down.


Talking about making ti hard to take down. It has a 2+ armor save and a barrier shield that give it a  5++ invulnerable save(which is 4++ if being shot at).  This shield also helps deflect some of the D weapon shenanigans by halving a 'Deathblow' result.  With toughness 9, this thing will stay on the board a long time.

I am scared to look at the armaments. Wow, they are crazy.  First of all, yes, the big cannon is a D weapon. It is a 1 shot 7" blast or it can be a 3 burst  apoc barrage that is s8 ap3 ignore cover.  That is pretty powerful.  I don't think it is as strong as the 2 shot tubrolaser but strong none the less.  Each arm can be a 5 shot multi-melta or an tri-axis ion cannon, which is either a 6 shot S7 ap3 gun or 3 shot S9 AP2.  It also has some burst cannons and smart missile systems that can fire as normal as well as fire at BS 2 in overwatch.

While all this sounds amazing and totally OP in the days of 300 point titans and wraith knights I am not at all shocked at this guy.  I can expect to see him in the new meta for tournaments just for the fear factor.  I think the almost $400 price tag will keep it out of friendly games as well as the 600 point cost.  Like a warlord or Phantom Titan I doubt I will ever get to see one in person. Maybe if I head up to Miniwargaming I will get to see it.

At 600 points that places it at the stompa and heirodule range.  I think this is much better than a heirodule (no surprise poor kitty) and a little better than the stompa.  The stompa is a superheavy walker with more hull points but it has the vehicle weakness, with hull points and armor value vs toughness, and a weaker weapons load out.

In the end, I don't think I will ever get one.  Like a warhound I don't think it how often I will play it will come close to the amount of money spent.  It would almost cover my entire budget for a year for a model I doubt will ever hit the field. Instead, I am looking forward to what the new codex brings.  Maybe the new Stormsurge will have a baby version of that cannon. At least I hope is is a quarter of the cost.