Whew! What a weekend!  Adepticon 2019 is in the books and it was a hoot! I got to play some games,  see some "famous" people, and got to see a bunch of vendors.  I had a great time and I will tell you all about it.

First up was the Long War Doubles tournament.  For not having played any ITC games in the past I think we did pretty well going 2-1.  Our first game was a learning game on what not to do when playing ITC.  We handed in a score of 17-5 but I do believe we scored more than that and I just didn't keep track correctly.  We made some tactical mistakes that cost us several points.  We did though take down the new Forgeworld Necron titan. We called that a moral victory.  That titan is scary but goes down quick like a stompa. 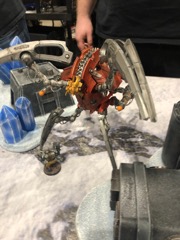 Our second game we played and admech and Custodes list.  They were not ready for a Warboss.  He took out 5 jetbikes and then Gordo mopped up the rest of the Custodes. Dave sent his deamon prince and Hellbull (Helldrake) into the Ad Mech taking all the fire from the robots.  We divided and conquered the rest and easily took the table.  We were sure this game to focus on the ITC objectives to get the highest score possible.  With this win, I considered the day a success.  We got a win in a big tournament. all was good.  Then the Knights showed up. 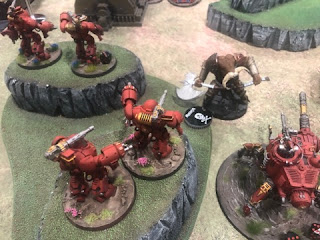 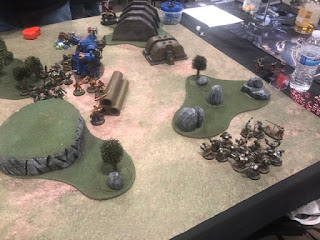 Staring at us for our last match-up was a knight and four Warglaive Armigers. Not to be left out, the second army was an Eldar army with rangers, scorcerers, shining spears, a Nightspinner, and 2 Fire Prisms.  It looked like it was going to be an uphill battle. Our luck gave us the edge. We won the roll off for the first turn and the Shokkjump Dragstas, who hit invuln after invuln, found the juicy targets of the Warglaives. They struck fear into the heart of the knight player by taking out a Armiger a turn before turning their gaze on the prisms. They even destroyed an Armiger in overwatch. Even with all of this, they were not the highlight of the game.  On turn two Gordo came in, charged the knight and in one round of combat, destroyed the knight.  The knight player in turn used some command points to attack Gordo and blew him up as well but it was well worth it.  With the knight gone, we held board control for points and then slowly won the game.

I had a great time playing with Dave and I hope he had fun as well.  Team Dakka Dakka Moo! finished in the middle of the pack.  Not bad for only getting one practice game in and even then, it was not using the ITC format.

While wandering around I did get to see several hobby famous people.  Of course, I saw Rob Baer since the doubles tournament was his.  I also saw Ash from Guerllia Miniature Gaming,  Austin from Deathray Designs, Victoria from Victoria Miniatures, and Aaron from Cool Guys Nation.  I was happy to see Josh and Erin from Miniwargaming.  It would have been nice to see Steve and Cullin but Josh took a few minutes to talk with me.  Hopefully I will make it back up there next year to stay in the new bunker if possible.  They are a bunch of good guys. I also saw Dan from The Havok Podcast and Greggles from Twitter.  It is cool to see these guys in person.  They are great guys!

Last of all, I did spend some time in the vendor hall.  I really didn't have any real goal in mind and with my earlier Mourngul purchase I didn't need anything from Forgeworld. There was quite a few MDF terrain makers there as well as third party part vendors.  It would have been nice to see Puppets War there but they are in Poland so, I am not surprised that they were not there.  I spent some time digging through tubs of miniatures at the bit vendor but the things I could use were too expensive for me.  The one model I might of gotten was an old Armorcast Haurospex.  That this was cool but I don't use the one I have and thought I would save the $75 for other models I will use. 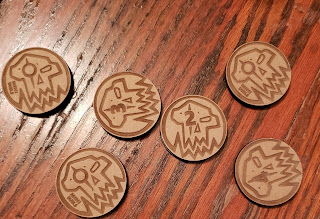 Over all it was a great time.  I did end up getting a set of ork objective markers as well as a set of Adepticon dice.  There was a lot of stuff in that swag bag.  Maybe I will post all the stuff I got in it in a later post.  On the table are the remaining GSC and Nighthaunt as well as some Sisters of Battle.