Another exciting convention has come and gone.  I was lucky to be able to fly back and attend Shorehammer 2017.  I have a few pictures and I will summarize my games as best as I can remember.

First of all Shorehammer is a gaming convention held in Ocean City MD.  They have three main events.  An Age of Sigmar tournament, a 40K highlander tournament, and a 40K Nut Crusher tournament.  They also have a painting contest as well as some small games that are open and free to play.  It is a nice convention that is just starting out but is growing bigger every year.

I played in the Highlander.  I brought my orks because not only was I there for the con, but I was there for a grudge match and my buddy wanted to see the Grot Mega Tank in action. The orks did ok in the highlander.  I made a few blunders in deploying my forces and target priority that cost me some points.  Over all I went 0-2-1. 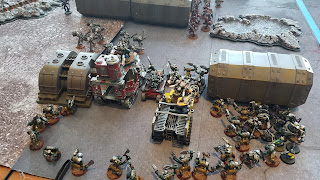 My first game was against a chaos space marine list.  First turn he destroyed my battle wagon then assaulted  my boys and big mek with some raptors.  That was a mistake as the boys just pounded on them and removed the from the board.  The game went back and forth for a while ending with a close game with him pulling out a win with linebreaker.  I should have concentrated more on killing his units and getting line breaker, but my  greatest weakness is staying true to the mission. 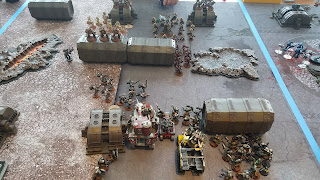 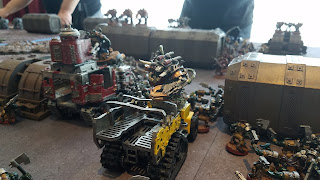 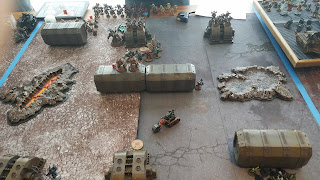 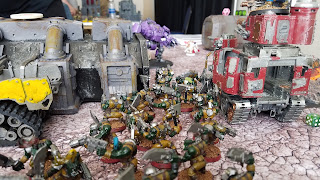 The second game I took on some Black Templar Primaris Marines and my boys were itching to fight.  I seized the initiative and pressed forward.  My flash gits deleted a squad of hellblasters on turn two and my warboss and friends were in the fight as well.  In the end My boys took out his Redeptor Dread and Helbrect while my grots killed a marine and held an objective.  I realized after the game I was using the wrong profile for my flash gitz so I conceded the match but my opponent was gracious and called it a tie.  I felt really bad and wanted no part of the points but he insisted so the judge sided with him. 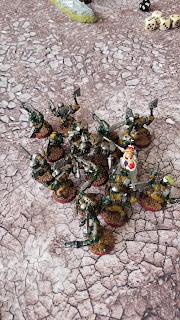 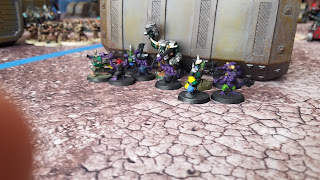 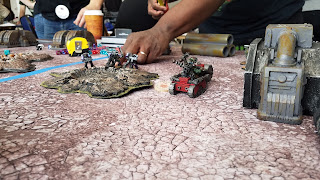 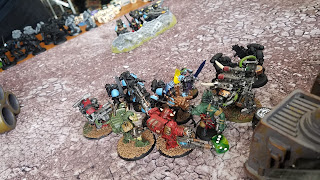 My last game was against Grey Knights.  It didn't have Dragio or Chaptermaster in baby carrier so I thought it was a fair list. I think the match would have gone differently if he got vortex of doom off.  Twice he spent command points for 3 dice and both times it failed.  He even used a re-roll and still failed.  This was a close fight I ignored his dreadknight and bated Voldus into a fight against my warboss and nobs.  He did take out the warboss but died to the nobs.  In the end my painboy, the grots, and runtherd were all that was left. He eked out a 7-6 victory because of first blood. 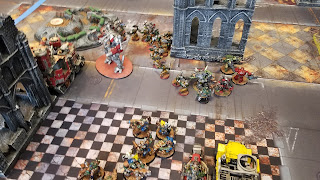 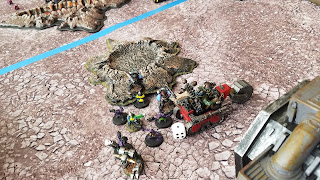 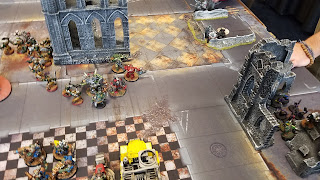 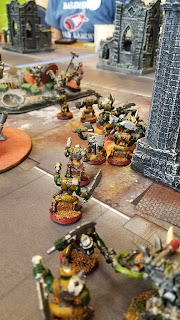 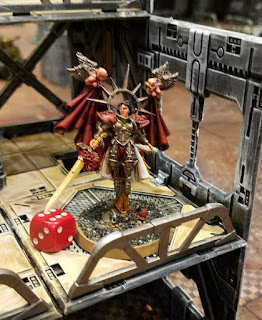 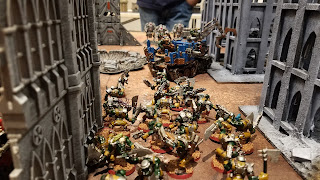 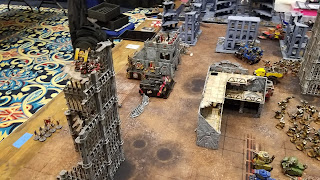 With the highlander over My buddy and I threw down in a 2000 point grudge match.  Sisters verses Orks.  It was a fun, nail biter of a game.  The opening turn my Grot Mega Tank took out a repressor with a single volley of fire.  After that it was the usual slugfest that orks dish out.  One highlight was when I used 2 command points to interrupt the fight order and deleted a death cult assassin squad with my boys.  Another was when I killed a repressor with that same squad, it's explosion  took out my meganobs, a painboy, and a bunch of the boys squad.  It was a glorious explosion.  The game went to turn 6 and I sealed it by drawing blood and guts with 2 squads ready to be devoured by the hordes.  IT was a 9-8 victory for the boys.  My hero was the grot mega tank while his was that repressor. 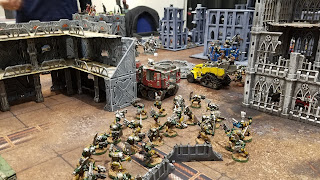 The one thing I think he could have done was keep Celistine in battle with my nobs and boys. with her 7 attacks she could have easily swayed the battle.  Though he did use her to get behind enemy lines. Another mistake was he sat on an objective thinking it was a different objective.  This cost him 4 points during the game.  In the end, it was a good game against a fun opponent and I miss playing with that group more and more. 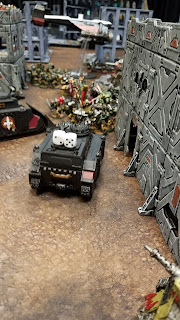 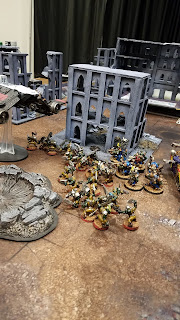 I had a great time this weekend and hope to make it back that way soon.  If not for next years Shorehammer, then for one of the the Tabor's Warhammer Gameday.  Who knows maybe they will come over here sometime to play.

Questions? Comments? WAAAAAAGGHHHHSSSSS?
Posted by Grenn Dal at 11:07 AM