Over the Weekend I had time to finish up my Primaris Reiver squad. I found once the main color was finished the rest fell into place rather quickly. 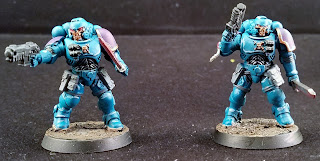 I am really happy how these guys turned out.  The only thing that I couldn't decide on was the knife. I sought out the help of friends on Facebook giving 4 different options.  The first was what I originally had, a copper blade.  The second was a black blade with blood followed by a copper with blood stain.  The final option and winner was a silver blade with blood stain.  This was the one that seamed to satisfy most people. 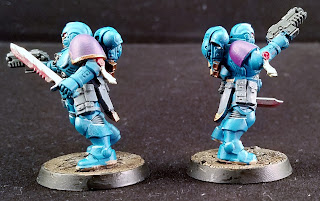 I also had a little trouble with the eyes. The standard yellow eyes, were just not showing up well enough.  I switched to red and while they don't pop, they don't blend into the face like the yellow did.  I might try to go back with a brighter red later but probably not.  I am too lazy and don't want to risk messing up what is finished. 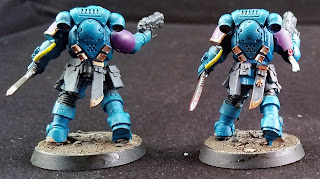 Something weird happened with the Agrellan Earth though.  I used some wood filler to cover the tab. I then painted the entire base black.  Finally I laid on the Agrellan Earth but when it cracked it pulled up the black paint as well.  This left the brown filler exposed.  I used a Nulin Oil wash to turn the cracks dark but if I ever use that filler again I think I will tint it black before applying so to avoid this problem in the future. 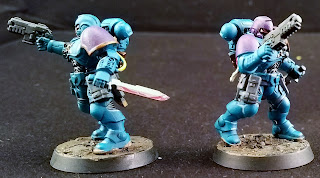 When looking at the models from table height I don't notice but looking closely at the guy below you can tell something is wrong with him.  When casting the head the mold expanded a bit.  This gives him a big head. There are two of these guys. It is not horrible but it is noticeable. 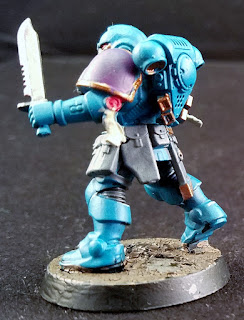 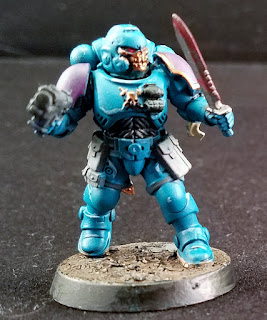 There you have it a small six man squad of Reivers.  We had a gift exchange at my FLGS and I got the Shadowspire orcs and another three pack.  I will add these in eventually as well to bring the squad up to nine. That is later though, I need to work on this month's goal: Fast attack.