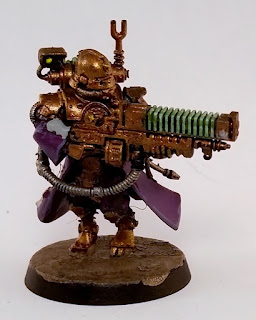 A while back I acquired some used Vanguard.  If you follow my blog you might remember that there were some strange choices when they were put together.  I fixed most of them up and added them into my growing Skitarii army. The last model of the group was had the arc rifle backpack with a carbine attached to it and some odd arm configuration. I decided to take a look at him this weekend.


Originally I think he had a sword and two arm together making a long arm with a  pointing finger attached.  I didn't want to waste the arc backpack, so I cut off the arms and he waited for me to get a arc rifle for him.  I searched high and low for an affordable gun bit but everyone wants ~$7 or more after shipping for the bit.  I just didn't want to pay that much. 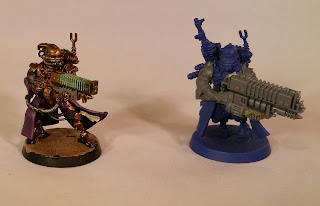 I then happened upon a conversion where they took the Kataphron Arc Rifle and  modded a pair of carbine arms to hold it.  I saw this and thought,  "I could to this."  The conversion I saw didn't care about the under slung hand but I had to do something.  I trimmed the hand from the carbine and used some greenstuff to fill in the gaps. While not pretty or my best work it works. 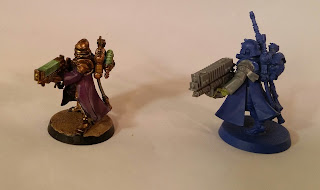 The gun itself is a bit bigger than the original but, I think it will look fine once it is all painted up.  I haven't decided if I am going to try to add the hose.  A part of me wants to add it but I am afraid.  I have not had great success with that kind of conversion.

If I chicken out, I will be priming him and painting him up to complete the last of my Vanguard.  If I am brave, I will try to ad the hose tonight.  I think I will watch some videos first.  They always make it look so easy.