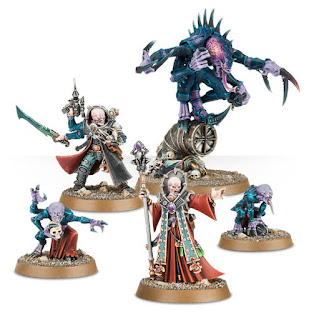 Coming in this week's White Dwarf are the rules to the Genestealer Cult that is in the new Deathwatch game. I have seen them all over the place so it wont take log to find them if you want to see them.  I am going to go over each unit and try to give my first impressions.


First up are the Neophyte Hybrids. These guys are similar to a guardsman.  The squad is 16 strong 12 have autoguns, 2 have grenade launchers and the last 2 have mining lasers with looks like a half range lascannon. They all have a combat weapon and assault grenades. I like that they have grenades and having the short range AP 2 is nice as well. They are a little better than a typical termagaunt. 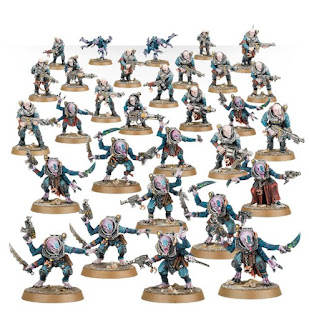 Then come the favorable disciples.  These are 12 mini genestealers.  They get an autopistol and assault grenades while losing some weapon skill, toughness, and initiative.  They are decent for 7 points a model.  I would take them over hormagaunts.  4 attacks on the charge because they have 2 close combat weapons and 2 base attacks. The grenades will allow them to hit at the same time as marines and before orks and necrons.  Hoping for some rending hits to bypass their saves will help them survive a little longer. 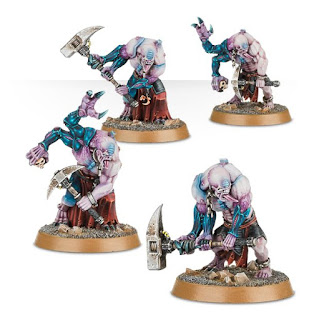 Next up are the Brothers Aberrant. These beefy guys all have power weapons.  The power pick and hammer are both unweildy   though they do have feel no pain to try to keep them on the board.  I can't see this group having any effect on the field.  with only 4 of them and no range I think they will be shot off the board before they even think of charging.  If by some miracle that can get a charge off they have to wait for everyone else to smack them before they get a shot.  If they were upgrades to the other 2 squads then maybe they might have a spot.  Kind of like an ork nob.

The last of the squads are the purestrain genestalers.  These are similiar to regular genestealers except there is only 2 of them.  It is pretty funny.  It looks like they are the body guards to the patriarch model.  I guess they can add a couple of wounds before he gets shot down.

The first Character is Primus Vorgan Trysst. He has a poison 2+ pistol and a bonesword.  If you put him with one of the bigger squads maybe he can get into some fight and use his sword.  he is pretty costly at 75 points.  The model looks cool though.

Magus Orthan Trysst is a level 2 psyker that draws from the telepathy discipline.  Would have been cool to get biomancy but anything but the tyranid faction is cool.

Finally we have Patriarch Ghosar. He is like a broodlord with psychic powers.  His claws do shred which is an added bonus.  The lack of grenades makes me kind of sad.  I wish he could have had flesh hooks to make it easier to assault and survive. Just hind in some rubble and you will be safe.

If we add them all together we get the Ghosar Quintus Broodkin.  This 600 point formation grants everyone stealth and infiltrate.  It also give the infiltrators shrouded the first turn so a 4+ cover on the first turn.  The best part is that they can assault the first game turn after infiltrating.  This is huge. I can see using this with normal Tyranids to distract the enemy on the first turn to keep our units safe as they try to make it across the board.

While these rules are not bad they are not enough for me to put $165 for the box.  If they made this half a lets play box for $85 then I might be tempted.  With the way it stands now I think I will keep my tyranids pure.