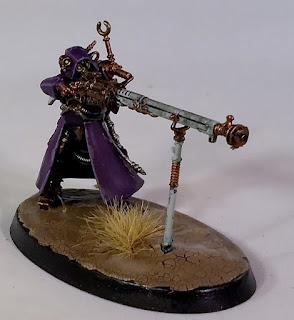 I finished up my Skitarii last night.  I am happy with how they turned out.  Even though they were not put together very well, I think I got them to a nice place so they look decent on the table.

The first guy is the single ranger I made. I had to trim the arms and head off and replace them.  I made a little mound for the rifle to sit on.  While it is noticeable I don't think it looks to bad after it is based. 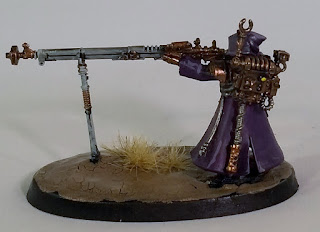 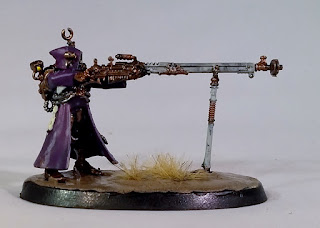 Next up is the Alpha.  I am trying to make these guys pop a little more to make it easier to distinguish from the regular troops.  I changed the color of the crest and added a gold ring on the base.  Next time I play I will see how well this works out. 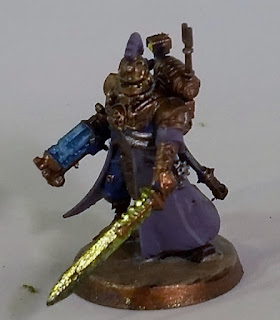 The power sword is done with nail polish.  it is a bit thick and rushed.  I made the mistake of trying to paint it before adding the polish.  Lessons learned for next time.  I envy those who have the steady hand and patience to do the multi-shaded power weapons. 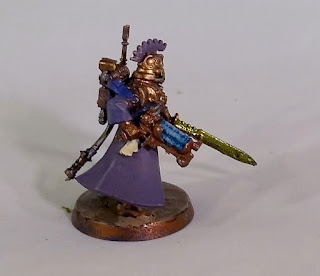 Next is the two plasma Vanguard. while one is built with the correct backpack the ammo was fused to the back.  This leaves the guns with out ammo but I am not to worried about this. 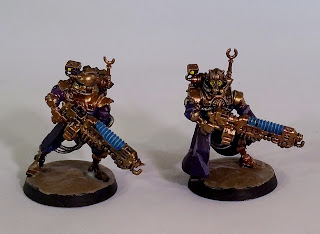 The other one has a standard backpack and a weird head. While it does not stand out too much, I notice it.  It didn't bother me enough to cut it off and add in the proper head since I can't be sure how it will look.  It is not out of place enough for me to fret about. 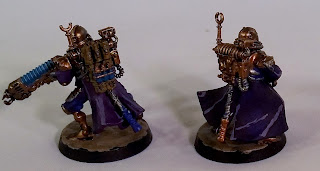 After that, all that is left is 5 normal vanguard.  They all turned out decently.  there may be an odd pose here and there but over all I think they look good. 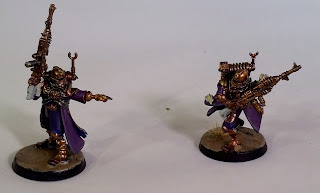 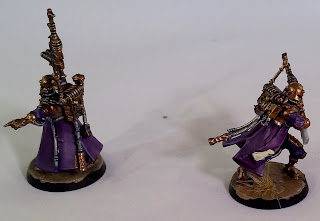 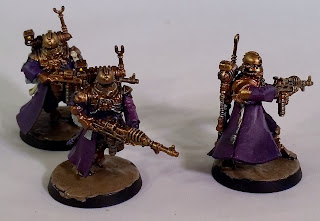 I am looking forward to these taking the field and getting some action.  The army is coming together nicely. With a couple boxes of Kataphron Destroyers I will have a viable 1500pt list.  As it stands, I can have a Skitarii / knight list. I also can make a Skitarii / Guard list until I fill in the rest of the army.

With these guys done I am moving back to tyranids.  I have 6 guants on the painting table and the new trannocyte / mucolid spore to build.  It is enough to keep me busy for a few weeks.