What is Next for Tau? 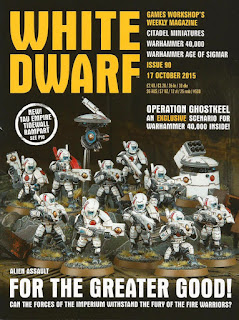 While RL has been keeping me busy there has been a bunch of leaks for the new Tau forces coming out.  There are new troops, new suits, and a piece of terrain.


﻿
First of all we have the breachers. 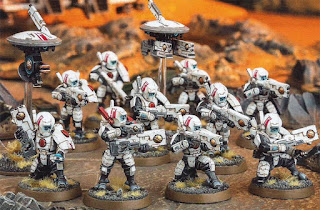 They have a new gun, new drones, and a new helmet but I am unsure of their role. Their gun is a veriable strength gun similar to the Stormsurge.  The only problem is the extremely short range.  To use the best profile you need to be within 5". The Tau never want to be that close.

The aslo can take one of the new drones that give the unit an invuln save.  The drone usually gives itself a 5++ and it's unit a 6++ but the breachers have a rule that allows the unit to get a 5++ along with the drone. Handy but not groundbreaking.  Just ask an ork player how often the 5++ saves a boy. 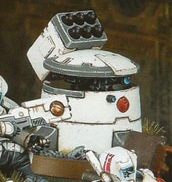 I don't think this is really ment for the breachers since the breacher's short range guns but it would be perfect for a fire warrior team.  The kit is $50. If I didn't have a ton of fire warriors I might be tempted.  I might try to bits out the turret but I can't see people selling these for less than $15  That is quite steep for a little turret.  Maybe I can scratchbuild something. 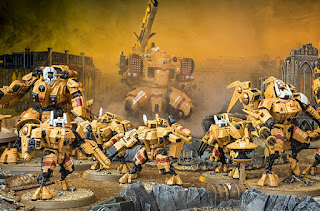 The next big leak is new crisis suits.  While the overall look is not that much different we can see that they look a lot more posible.  The torso and groin are seprate and it looks like the legs and arms are jointed for better poses.  The ankles still look as flimsy as all get out but what can you do? 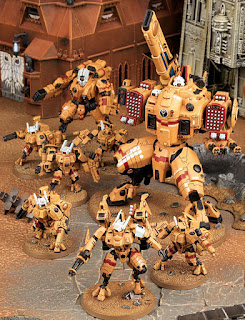 Another Change is the shoulder pad.  I like this look and will probly be adding it to my existing suits. The last thing I see are some of the suits have kneepads.  I am not sure if this is supposed to have significance or just a optional piece.

At first when I saw the commander suit I thought it just was the finecast model but a closer look makes me think it is a new model as well.  As with the crisis suits there seems to be more joints and slight changes here and there.  I never had one of the finecast suits though so I am unsure if it is truely different or just a different pose.

Last up is the terrain. 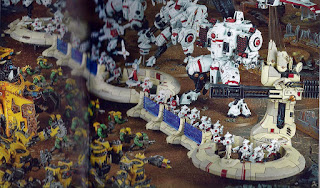 This wall emplacement looks cool.  It looks to be the ageis for the Tau.  The problem is an ageis is $37.  This monster is $160.  While it looks cool and it probably has crazy rules I will use my custom defense line from WarGamma if I want a defense to stand behind. I just don't know what they were thinking when they priced it.  With that being said I bet it is a limited edition and will sell out before a normal person can order it.  That is the way of these things. Just looking at the kit it looks like 3 circles and 2 wall an a turret.  Maybe they will sell a kit with the circle and wall and turret as one peice for $50.  I might get that. Knowing GW though that is just wishful thinking.

So far, after looking at all the new kits, only the Ghostkeel is on my must buy list.  I have some forge world commanders to use as my commander and I already have a bunch of fire warriors and crisis suits.  And while they might look dated they will play the same.  I will probably get one Ghost and go back to my admech... heck maybe I will stick with the admech and wait for the market to get saturated before I head out to get my Ghostkeel.

So there you have it.  The latest and greatest of the new Tau.   They look cool and I am glad they are updated. Hopefully we will get a look at the new Codex and find out how much they have changed.