This weekend was Forgeworld Open Day.   There were a lot of cool models like the Iron Warrior Primarch, a couple of Chaos Titans, and the Mastodon Troop Transport.  The one thing that caught this Xeno lover's eye was the new Tau KX 139 Ta'unar Supremacy Armor.

I love this model.  I love the riptide (except the head) It really fills my mecha need.  The 2 Forgeworld riptides are also cool.  One looks awesome but has some weak rules and the other kinda looks silly with that little head and huge backpack.  All three of these are put to shame by this monster. 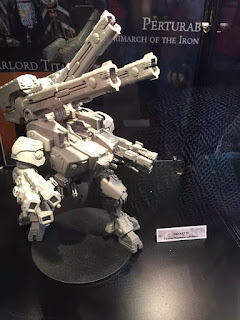 Looking at the arms it looks like it has a tri-barrelled Ion cannon from the hammerhead on each arm. This load out is impressive and I can't see the rules be that bad for this weapon.  On the chest it looks like we have some burst cannons and smart missile systems.  While not amazing, I see this as the heavy stubber on the Knight. 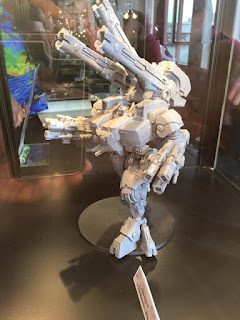 Lastly and most impressive are the 3 barrels mounted on the top. I can't place what weapon it is.  It doesn't look like the rail cannons from the broadsides, hammerhead, or tigershark. It is different than the Riptide load out so I think we are seeing something new.  Maybe the Tau will get the mighty strength D weapon. 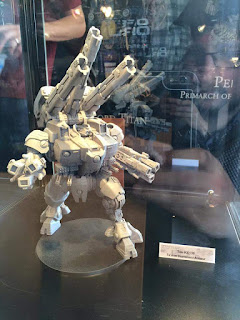 They mounted it on a big circle base so I don't know if it will be a monstrous creature, a gargantuan creature or a super heavy walker. Tau doesn't have any walkers so I think the walker is out.  People say it is on par with other sized knights like the Wraith knight so I might lean that way.  Only time will tell.

When looking at it the first time I instantly though of the Puppet's War sculpt.  I know this is more a dreadnaught size but I think they look a lot like each other. 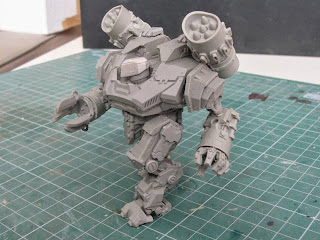 The other similarity I see is a old Macross The Destroid Monster. While the Destroid is a bit more squat I am loving that Macross feel.  Any thing to remind me of that show is an instant win. 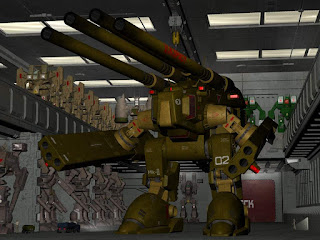 Natfka over on Faeit had a nice article where someone cornered the designer of this guy.  They say that nothing has been written but some interesting ideas floating about.

Overall I am excited about this model.  I am worried that it's cost will put it out of reach for me though. (Rumors put it over $350.)  I will stick with my two riptides and regular crisis suits.  This way when the new codex comes out I don't have to fret over using the new formations or trying a Combined Arms Detachment so I can fit some Forgeworld in.