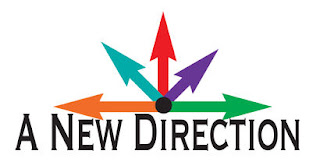 This blog has been mainly a 40k blog with a smattering of other games. When we moved to DC I had to find a new group of players to play with.  And I did I found a great group of guys that meet once a month to throw down some 40k and have a have a good time.  This leaves a big gap every month that I don't get to play any games and if I miss a gameday, like I did this month, it leaves an even bigger gap.  So I thought I should find some other way to get my gaming fix.

Armada looks interesting but at $100 just to try it I think I will pass.  Also once I start down the path of Star Destroyers forever will it dominate my destiny.  X-wing also looks fun but the few games I played started to get repetitive. Fantasy or Age of Sigmar also looks to be pretty expensive and I didn't like fantasy before and I think I will stay with 40k for the large battles.  There are others like Dark Age and Wrath of Kings but I don't see a huge following for them around here.  What does have a following is Infinity.

Way back before I ever got into 40k I fell in love with the infinity models.  Their Anime feel set off all kinds of bells in my head but I was a poor student and no one wanted to play so I never got into it. The appeal never really died down so when I found out that there is a decent following here I was intrigued. 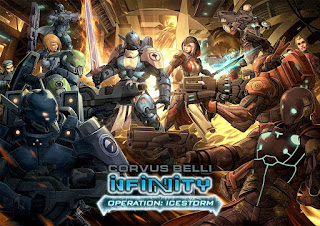 I first looked at the starter set Operation: Icestorm.  I looked at the models trying to find something that caught my eye.  My first love was the Zondcat Moriarty for the Nomads.  But when I found out he was just a helper with no weapons I was really sad.  I love the cat ninja look.  I thought the game was humans vs humans with some abhumans (were creatures) but I was wrong.  There are two big alien races.  The Combined Army and the Tohaa. 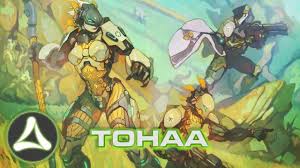 I did like some of the sculpts of the Combined army they seemed dominated by the Morats which feel like Planet of the Apes rejects.  So I looked at the Tohaa. These guys remind me of the Asari from Mass Effect.  While they weren't my favorite, I didn't hate them either.  They are a small faction as well so this will keep my spending down since there are not a lot of options like there are with the other groups. Lastly they have an interesting play style that will take a while to master (if I ever do.) Overall, the Tohaa are going to be my entry into Infinity. 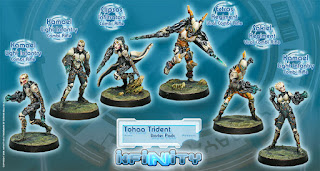 My next step is to get the starter set for them.  I used the last of my budget this month to pick up a Gao Tarsos since he looks the coolest.  Next month it will be the starter set as soon as my Skitarii and the Tarsos are finished. 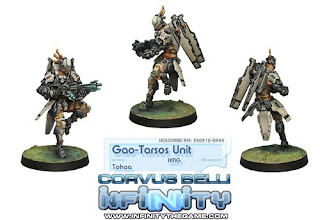 From there I am not sure where to go.  I hear the Makaul are a good cheap line unit so I will probably get a pack of those after the starter.  I figure I can alternate from 40k to infinity a few months and I will have all the units I need.  To be honest a starter and Tarsos will give me a good starting army to help learn the ins and outs of the game. I need to learn to walk before running.  I doubt I will be ready to play any games at the Nova Open in Sept but you never know. If anything I can watch a few games and learn from the experienced players.

I am excited to be starting something new.  I still love 40k.  I will not be quitting anytime soon.  My group is starting a new campaign and my orks are ready to start krumpin. I am eager to let loose the WAAAAAGH!!! 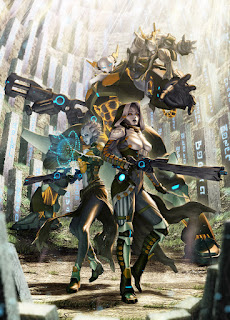