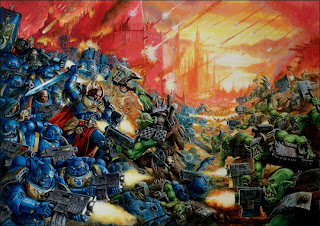 So it is my third week defending in planet strike.  So it is time to try the classic big base with refused flank. Let’s look at the map. 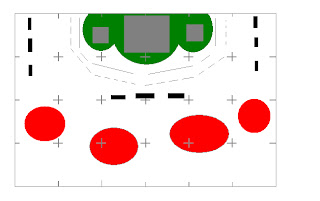 So the refused flank stratagem  is 3 points so I have to have 3 bastions.   I have circled the wagons and surrounded my fort with defensive walls and I put up some tank traps to try to stop the land raider rush from the sides.

As for a list I plan to try out the lootas again in one of the small bastions and the big guns in the other with a shoota boys mob with mek with KFF in the center.  I will add in a couple of battle wagons with boys into reserve and either some Kans or a looted wagon for fire support.  I will probably bring my storm boys to the party since I have been having fun with them lately. After all that I will need to see how many points I have left. Another group of boys would be welcome or maybe a nob squad with a warboss.  Stay tuned tomorrow for my list.
Posted by Grenn Dal at 9:32 AM