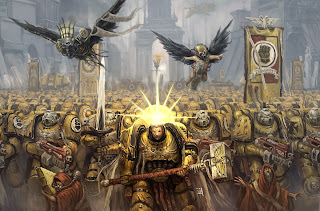 Last night I defended my ork fort vs an Imperial Fist army. I used the the army and defense setup found in yesterday's post that you can find here: Planetstrike Attack and Defend list

So he chose A forward observer for a stratagem. Looking at all those Term I am very afraid.  He drops 8 firestorms but they bounce off my bastions and so the games begin.

Fists
everything come in except Lysander and his TAS and the one Tac squad. he deep strikes everything and gets no mishaps.  All his term are within striking distances of my bastions. He shoots one melta gun at a bastion and misses and his missiles bounce off. During the Assault phase all 3 term charge the middle bastion and blow it up. Killing 17 shootas.

Ork
All of my reserves come in except 1 battlewagon. One wagon trys to roll over some term, while it takes out 2 of them the chain fist blows it up.  Luckly the hard boyz survive the explosion. My Stormboys come in on difficult terrain, killing 3 of them.they try to run out but just kill 2 more. My shooting is ineffective and my hard boys assault the hurt squad of term and my shootas attach the other Term sqaud. the hard boyz wipe out the one squad and the shootas take out 2 of the others. 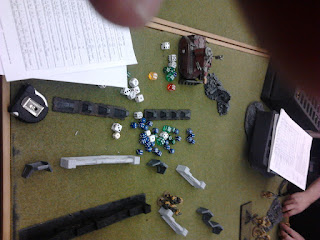 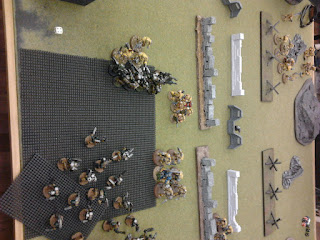 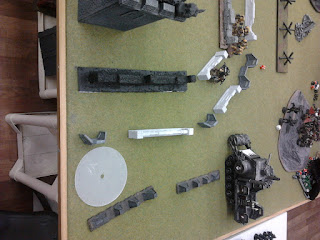 Fists
His other squads came in the tac squad by the left bastion and Lysander came in by the right. he moves up his tac and scout squads as well as his TAS.  during the shooting he blows up my left bastion killing 4 grots and 1 gun making them break off the board. He assaults my hard boys with both TAS while the hammers and Lysander go after the right bastion while his H.flamer Tem go after my battle wagon.  He wipes out the hard boys and blow up the bastion killing 5 lootas but they stay in the fight and then wrecks the wagon. The shootas are also wiped out.

Orks
My last wagon comes in on the left. My Stormboys finally get out of dangerous terrain killing another 2 and get ready to assault the term that wrecked the wagon. again my shooting is non existant. My stormboyz and boys take out the term before they get to attack. 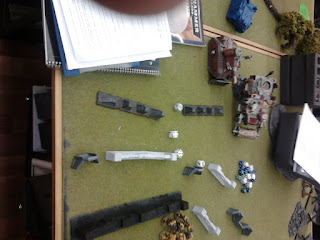 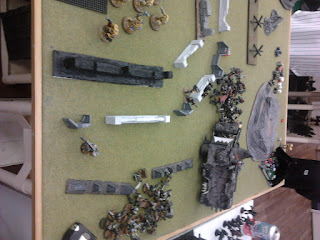 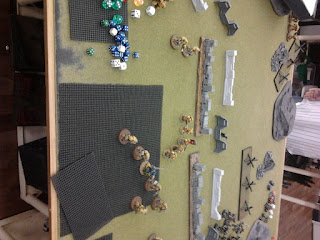 Fists
He trys to pull back his scout out of charge range of the right side mob of boys and Stromboyz. He then spaces out his scouts and tac squad on the left side to avoid the feared boom gun. his TAS also space out.

Orks
the Stormboyz jump into position to charge the middle Tac Squad, the boys got a 6 on their move through cover and get ready to kill the scout squad my wagon moves up and deploys it boys. I declare my Waaaagh and have the boys on the left run towards a weakened term squad and Tac squad.  While the right boys get closer to the scouts.  The boys on the left kill 1 term and 3 tac marines while the stormboyz kill their tac marines and the other boys kill the scouts. 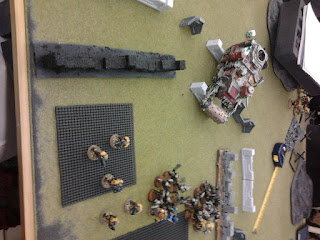 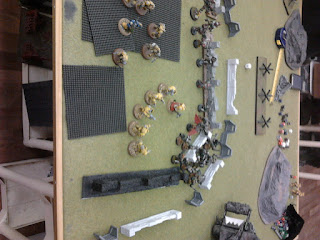 Fists
Lysander and co get ready to charge my boys on the right while the Liby move toward my stormboys.. it will be a close call if they can charge and the scouts plan to join the scrum on the left. The liby rolls a 6 on the charge and makes the charge while Lysander destroy the boys. On the left I kill the last Term while a few more boys die. Due to the term going through terrain Zagstruk gets to go first.  He takes out some L-claw term and the Lib before he kills some boys.

Orks
I move my wagon up to hold on objective and Immobilize my looted wagon on some terrain. In assault I kill all but 1 l-claw term while he finishes off my boys but not before I kill of his tac squad.

Fists
He spaces out his scouts and and gets ready to assault my wagon.  Lysander pulls back so he doesn't have to assault through terrain when he assaults. Lysander and friends make the charge and do not have to go through cover so his l-claws go first. They wipe out my storm boyz and I call the game.  I only had a battewagon and a immobile looted wagon.

It was an uphill battle for me.  It was the first planetstrike I didn't bubble wrap my bastions with boyz and I paid for it. He would have to drop further out. giving my shootas and lootas more time to last away at guys.  Also losing 17 boys to an exploding bastion hurt as well.  Zagstruk still performed well.  Have a power claw go at Initiative helped to kill several terminators.  I love that Guy.

It was a good fight. I had a good time and I hope Stewie did as well.  There is a tournament this weekend that I will try to make.  it might be time that the necrons wake from their slumber.  Have a good weekend
Posted by Grenn Dal at 9:17 AM