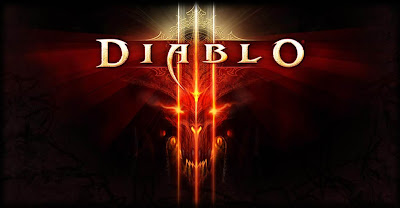 This weekend I got to try out Diablo 3 beta.  The game is very well polished.  The controls are comfortable. I have not played Diablo 2 in a while but they seem pretty close. They are feel like other games like Fate and Torchlight.  It is nice for the keyboard/mouse users but I would like to have some gamepad control.  I can understand for a FPS that mouse and keyboard are preferred but with a game like this I think that a gamepad would be a better option. While playing I have missed clicked and had my ranged guy run up to the mob insteadof sitting back and shooting.  I guess I just have to get used to holding the shift key.

there are 5 classes and I tried each of them through the first dungeon.  I thought this would give me an idea of how they play and which one I like.  There are 2 close combat guys and 3 range characters. They give the range guys a debuff to their defense to balance out the fact that the CC guys have to wade into the fight.  I did find the range classes to be more my style. Let's look at each class.

the Wizard is your typical magic ranged character. you start with a wand an a magic missile.  Then you get a ice beam that takes your mana.  The mana regens quickly so this is a nice feature.  No more carrying around a buch of mana pots to continue to melt faces.  This class might be the one I use.  I am always a sucker for a mage.

This class starts out with a crossbow pistol but I found a bow pretty quickly that out damaged the pistol and never looked back.  This class plays like the classic bow class from the previous games. I like the rapid shot ability.  was like using a machine gun :) If I don't use a wizard I will use this class.

This class was a bit odd. you start out with a blow gun attack that can poison your foe.  Shortly after that you get crypt spiders. These are kind of cool except the animation is your character pulling out this huge vase and chucking it at your victim.  It is pretty funny when you continuously pull these things out of thin air like an archer would pull another arrow out of a quiver.  it is just silly looking.  This class reminds me of the necromancer class from 2.  I really think this should be someone for the undead not one against them.  overall, I don't see me playing this class much more than I did this weekend.

This is the fast melee character.  I really like playing it.  Even though I put weapons on her she still just punched and kicked her way through the level.  It was a nice chage of pace for the game and it will probably be the second class I start.

This is the typical brute force guy.  He is pretty straight forward huck smash type character.   out of all the guys  I played I found him saying he didn't have enough rage the most.  I could not figure out when his rage was used or how it refilled.  One moment I was able to use my second ability freely the next he was complaining about not having enough.  He was pretty cool but I just don't see me playing this character much.  The idea that the "armor"  that drops for him is just different body paint is a bit silly.  Sure they call it a tunic but all I see are some body paint stripes.

Ok, so I have gone through all the characters and the question remains.  Will I drop $60 on this game? Signs point to yes.  It was pretty fun and if I can get a couple of close friends to play it will be even more fun. I just hope they don't expect me to be great or anything.  One of the reasons I quit raiding in WOW is because people expected too much from me.