Every August Fantasy Books and Games has their annual Bazaar where we can bring in items and they will sell them in a consignment like transaction. The catch is, instead of getting a cut they give you store credit.  It is a cool deal and you can find some real bargains.  Here is what I got this year.

First up, I picked up some pieces for a beginning warboss.  Every warboss needs a couple of battlewagons.  This battlewagon even came with the deffrolla upgrade. If my buddy didn't want it I was sure going to use it. 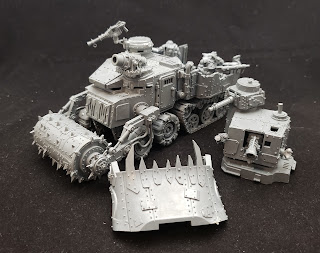 After the battlewagon, the boys need rides to keep up with the boss so two trucks were acquired as well. 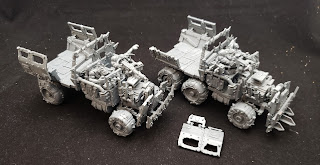 I was hoping for some cheap stormboys as well but none were to be had.  Just as I was about to leave the Orks behind and look for some of the other pieces I needed I saw this guy just sitting there all lonely like. 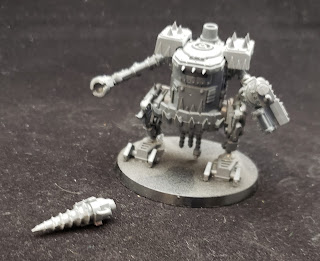 Who could pass up a face like that at a fraction of the cost:  Not me.  I need another blue kan anyway.

Just last week I was contemplating selling off my tau in this Bazaar but decided against it.  Going all in, I decided that if I could finds some deals I would help out my little blue guys.  First up, was a group of Breachers. 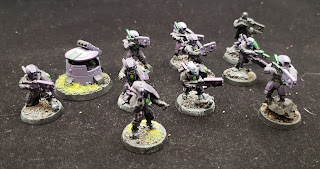 My Tau predate the Breacher Teams so I only have strike squads.  I at least want to have the all the options for the army so I needed some Breachers.  I looked for some Kroot as well, Unfortunately,  if there were any to be had they had already been swiped.

I also remember that I only had a few pathfinders and I hear you need a few of these guys to be effective. 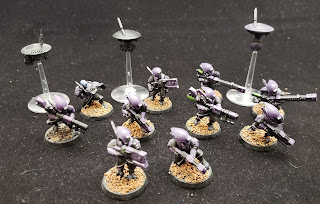 Lastly for the tau I have been meaning to pick up a missile broadside since all mine are rail rifles versions.   This little guy was quite the steal. 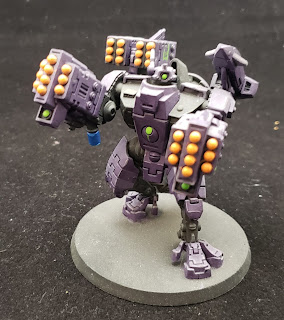 Along with the Kroot I was hoping to pick up a flyer or stormsurge but again none were to be found.  I moved onto the next army... Nighthaunt.

I was upset with the starter set for AoS since it only had 4 Grimghast Reapers in the box.  Even with 2 of those sets you still don't have a legal unit size.  I have been on the fence about buying a box and keeping a couple for myself and selling off the rest.  What I got today was eight for the price of a single one off Ebay.  I could not have been happier about that. 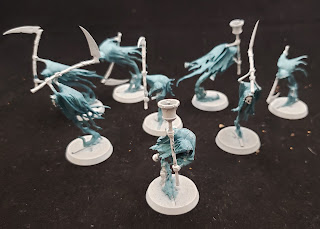 I also was thinking about getting another set of Chainrasps so I could have two sets of 20 but at these prices I got two sets (20 models) for half the price I paid for ten models just a few months ago.

That was a great deal but it does not beat my final purchase of the day.  I have not been in the market for another hive tyrant but when I saw that it had wings and other bits included for a measly $2 I just had to get it.  Even if I fix it up and sell it, I will be worth the $2.  Although, now that I think about it, I have been wanting another flying tyrant so I will probably keep it. 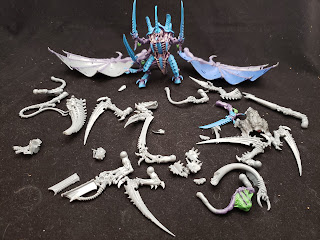 This bag of bits was a bit weird. It came with some Carnifex carapase and the Tervigon's baby termagaunt.  It was also missing the devourers, deathspitters, and single bonesword. It is almost like the person had no idea what they had.  Their loss and my gain.

That is the end of the Bazaar this year.  I got several things to add to my workload.  Hopefully I can cross off some of these by next year.

Have a good rest of your weekend!
Posted by Grenn Dal at 9:27 PM