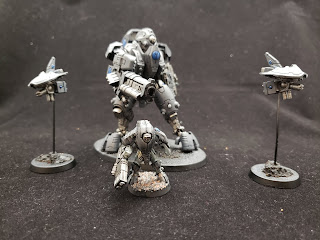 This Weekend, I felt I needed a change.  It has been Orks and Genestealer Cult for a while so I broke down and brought out my Ghostkeel to paint. 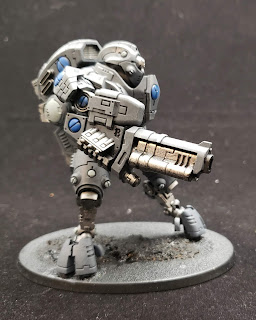 I got this model several years ago from a bazaar when I lived in the DC area.  I loved the model but since I wasn't plying Tau, It was never high on my priority list to paint.  I finally decided it was time to give it the love it deserved. 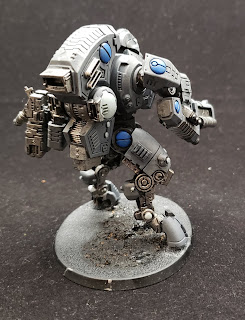 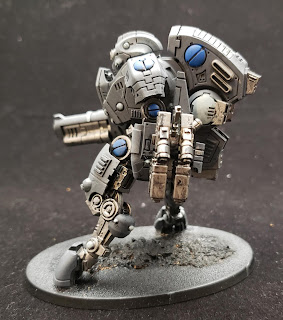 I decided to go with the grey scheme like my stealth suits.  The unit is supposed to be sneaky like them.  I painted most of the model in Mechanicus Grey.  I then did a dry brush of Dawnstone Grey.  I picked out the symbols in Caldor Sky and several details in Clestia Grey. 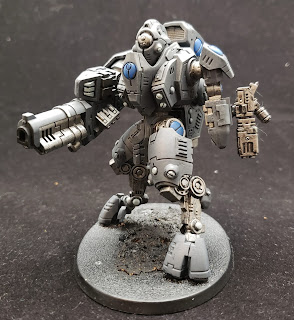 All that I have left to call him complete is the basing. Since it has been a while since I based a Tau unit, I need to figure out how I based them. I think it was a mixture of brown and black sand with some extra rocks added to break up the surface.  I don't have a ton of Tau forces, so maybe I will redo the bases if I can't reproduce the look.  I have been eying the martian technical paint since I like the Agrellan Earth paint. 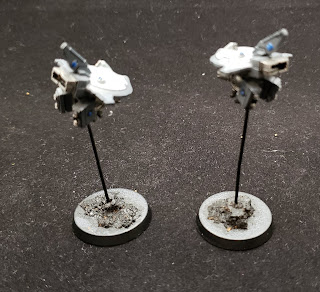 A Ghostkeel can't be with out his trusty drones, so I had to paint them as well.  Again, they are stealthy, so I didn't paint them using my usually Tau orange.  A I used a similar dark and light grey scheme  finishing with leadbelcher on the metallic parts of the drone.  The previous owner mounted them with a stiff wire.  I am unsure if I will keep them like that but, for now , I am happy with how they turned out. 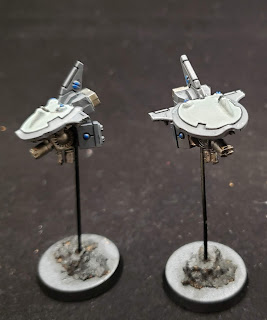 After finishing with these, I felt the Tau could use some more love, so I decided to work on an Ethereal next. I should have a post on that soon.

Questions? Comments? For the Greater Good!!