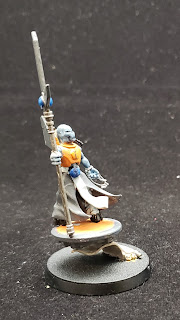 As I talked about before, I completed work on a Tau Ethereal after finishing the Ghostkeel.  Like the Ghostkeel, I have had this model for a while and I am just now getting around to it.

I got this model second hand.  It was primed and had some paint on it.  I did my best to remove the paint but the primer just wouldn't come off.  In some places it was pretty thick and hid some of the detail.  I did my best to bring them back out.

The chest had the most detail removed.  I tried to define the symbol with some black lining.  I think I should have used a red or mixed a darker orange so it doesn't stand out so much.  I think it looks decent but I know it would look better if it wasn't a straight black.

The disc is a bit of a problem.  The colors just didn't want to stay on it.  I think it took 5- 6 coats to get to where I was ready to throw in the towel.

In the end, I did a decent job.  I am unsure if I will ever use him.  I got him when we were going to an escalation league and start with a start collecting box.  I had most of the items from a box but this guy so I just bought him.  The league never did anything so it was a bit of a waste.  If I am going to explore the Tau, I guess it is good to have all the options. 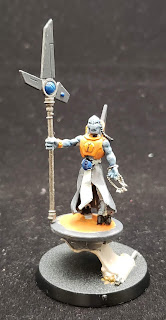 I am planning to go back to the GSC next.  It will be nice to finish out the Jackals so I can move on to the Ridgerunners.  Yes,  Ridgerunners.  I now have two.

Questions? Comments? For the Greater Good!
Posted by Grenn Dal at 7:54 PM