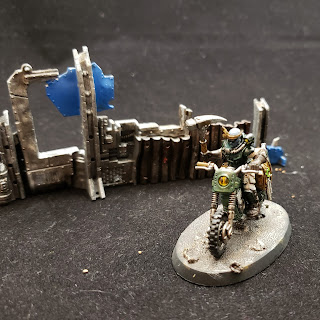 This was a pretty calm weekend.  I did get a little painting in and finished one Atalan Jackal.

Now that I have a paint scheme for the bikes I can just follow along and work through the rest of the bikes.  The second bike has the power pick.  It is a bit comical in size and looks too big for the little neophyte.  I was able to paint him quickly and move on to the next model. 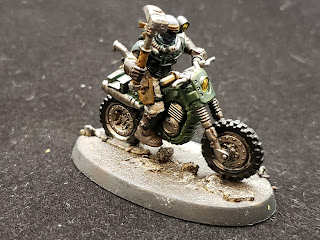 I am not sure how I want to run these bikes.  I am wondering if I want to do the two pistols version with an incinerator Wolfquad for some close in shooting but I am not sure a bunch of strength 3 shots with the flame weapon is all that great. 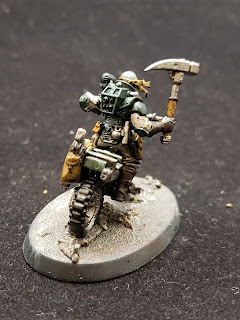 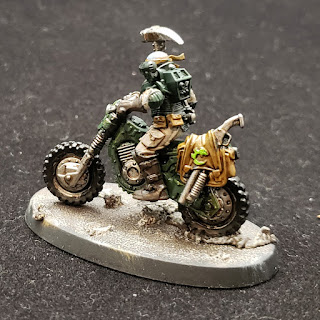 Another option is using them as ablative wounds for the mining laser.  four bare bones jackals with a laser wolf is 67 points a neophyte squad is 62 with one laser 74 with two.  Both squads have ten wounds.  The neophytes take a larger footprint and are objective secured while the jackals and highly mobile and a bit tougher.  I am going to have to play a few games to figure it out. 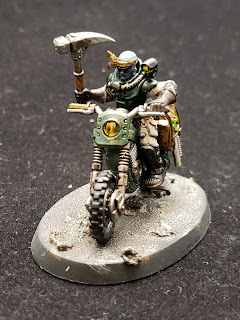 I did get a chance to build the Ridgerunner.  I decided to just stick with the flare launcher but I have not made up my mind on the primary weapon.  I am going to try to magnetize the bits so I can make them interchangeable. 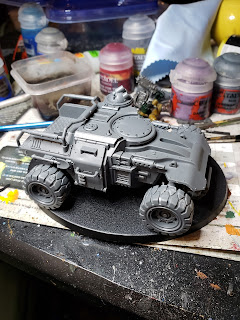 That is all I got done this weekend.  I am hoping to do some more this week. I will need to focus on my orks for a bit to make sure they are ready for Adepticon. Other than that I still have the two Jackals, Wolfquad, Jackal Alphus, and Santus to paint.  I then have a whole Nighthaunght army to do.  I have enough to keep busy. What are you working on?