This weekend I finished up work on my Heartrenders as well as my Bloodwrack Medusa.  This completes my pledge for the month on April just in time. 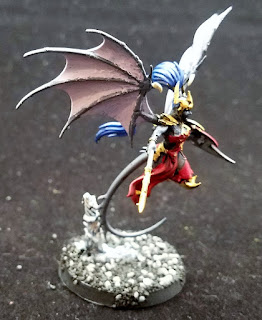 I feel these are a few of the best models I have painted.  The wings are a bit of a disappointment but I can only paint one color try to fix my mistakes made while painting that color only to make more mistakes on the first color.  I just have to except that my hand are only so steady and move on. 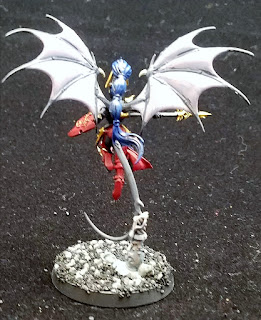 With that being said I feel I did a fair job on details like the eyes and armor.  I think the detain on the shield was pretty good. 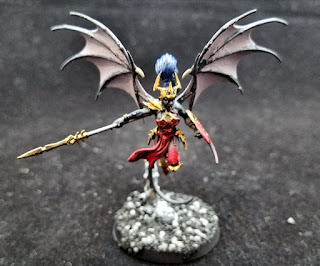 My main point is if I can get a painted army on the table then most people can.  The key is to use those amazing artist as inspiration but don't use them as a benchmark for your skill. 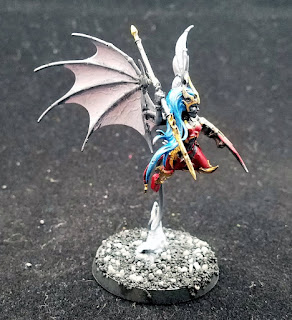 This is the last of my five heartrenders.  With this one complete all I had left was the medusa. 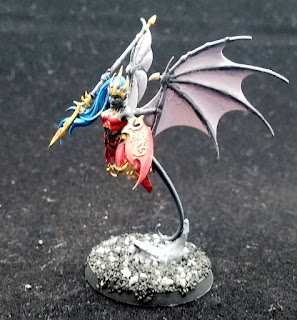 I picked up a shrine a while back when I pre-ordered the other two squads. I plan on building the shrine for my war machine during July.  I plan on magnetizing it so I can use it as the shrine or cauldron  It doesn't look to hard. I have seen others paint up the medusa as the typical green snake body even though their melusai and Morathi are a different color.  I decided to continue my paint scheme. 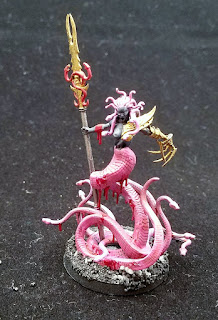 I am unsure about the blood on this model.  I probably should have gone with a darker red as well as maybe use a read glaze for a better effect.  Maybe I will go back and work on it when I get those paints.  I used a red wash to try to help give the feel of being covered in blood but I don't think it is enough. 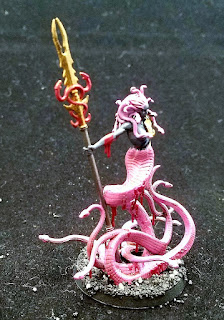 So I completed my pledge for this month.  Next month is a hero which I plan on doing a slaughter queen.  I picked up a reaper miniature of a six armed medusa that I think will be a great and thematic slaughter queen.  After that I plan to get a jump on my battle line for June since it will be 20 witch elves.

While working on those I plan on getting fitting in some 40k Models.  I have several Necrons to work on as well as the two Armigers. In my Tyranid Queue I have some hive guard and my Orks have the tankbusta and others.  I have plenty on my plate to keep me busy.  Hopefully this week I can actually play a game.