Been a while since I posted, and wanted to show of what I've been doing. There was a local terrain competition at the nearby GW store the other day, and a hobby club friend was kind enough to 'donate' two boxes of material to the Tabor Warhammer League earlier last month, with the idea that it be used for the club. Two birds with one stone, so I set to work! Especially useful was the Sector Mechanicus NIB set. I've been meaning to replace some of my oldest work at the club (read as pieces that are about 5 years old now), so I set to work. 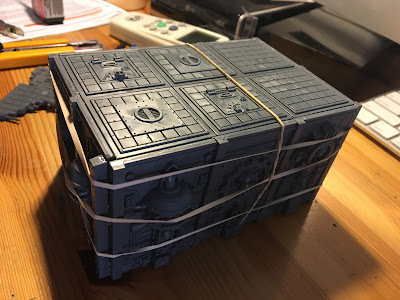 First I decided I wanted a small, contained building to be the pump and control station. ensured the options with windows and doors were placed in 'useful' locations, so that one would look out onto the street and the other facing the storage unit. I had to cut off the damaged ends of the four ceiling tile bits with a hobby knife, then glue together. I also trimmed off one of the skulls on the ceiling hatches because it's not necessary.

Note to self: Better to glue the sides together separately, then put the two halves together. Needless to say, lots of rubber bands were used. 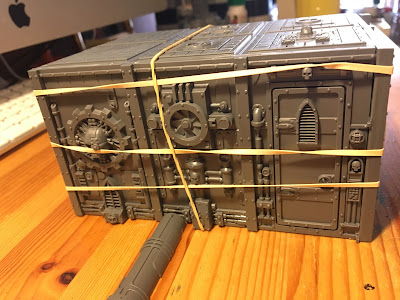 You can see the location of where the underground pipe will go from building to tower. I wanted it underground to allow more model movement, as this is supposed to be a functional terrain piece, not a showpiece. But it's also more logical (safety, security, not vulnerable to bullets, etc). 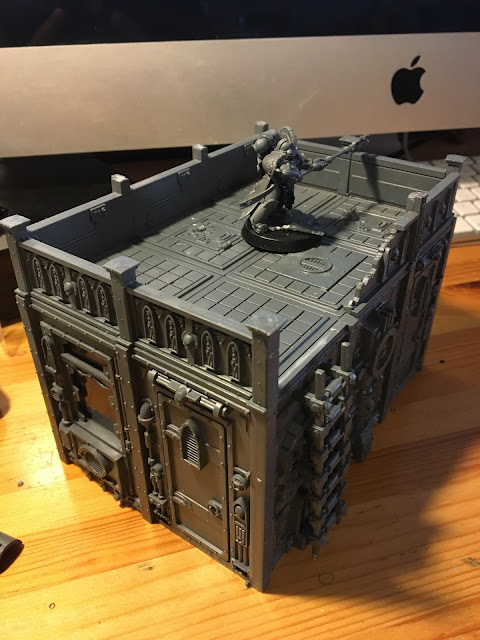 I then trimmed off all the spiky and flame bits on the ballustrades/wall bits because they absolutely murder peoples hands when trying to place models. I also added the ladder in the only logical place, and attempted to make the building appear as functional as possible.

I even added glass (Plastic from a GW clampack) in both parts, to add a further look of realism and reality. It's simply held in place with super glue. All parts were added before I glued the building together. 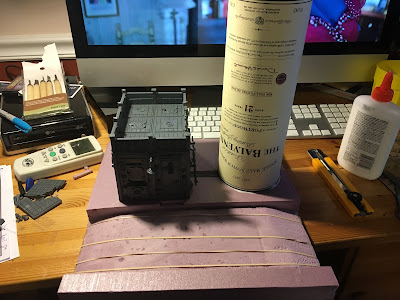 I then utilized some off cuts of pink foam I had to create a foundation block. Below the block is a 1 x 1 piece of 1/4 inch mdf from back when I was trying to build my own modular board. While that project didn't work, this is super useful now. 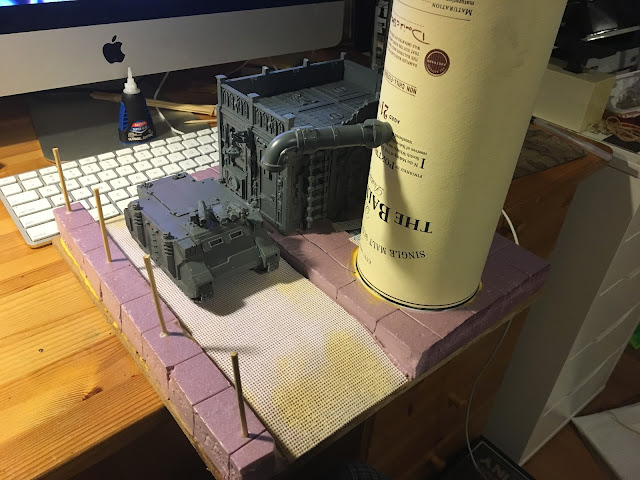 With the board pieces secured, I added a piece of canvas backing for needlepoint (thanks ebay!) which is secured with wood glue (yellowish glue) then layered with a mixture of scenic cement, PVA, and more wood glue. It dries hard as a rock. I also glued the plastic overflow pipe to the whiskey container. Prior to this I hammered a nail into the container as the pipe needed something to help secure it. You'll also notice I carved concrete lines into the foundation. While this should have been done beforehand, it looks okay now. I also made sure to damage up some of the corners and roll a piece of balled up aluminum foil over the foam to provide damage/wear and tear. Be sure to drag it about in some places to represent scrapes. 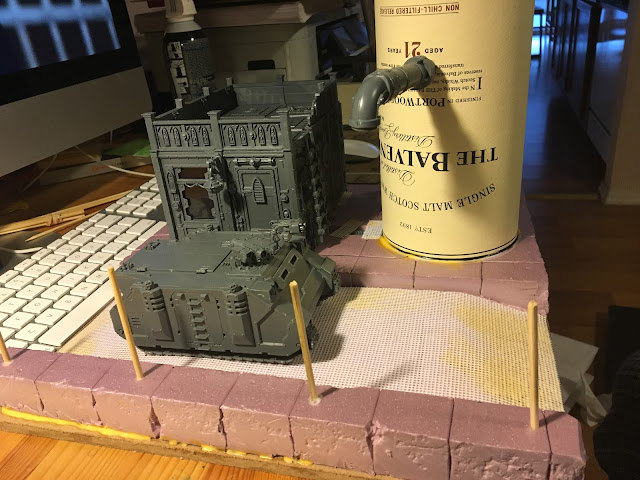 You can see the size of the building and fence posts now. I was tempted to build dencing around the entire thing, but realized that it would not make it more playable, rather less so. Also you can see the recessed pipe and grating that covers it. While it starts pliable, the grating hardens after the glue dries. It can hold model weights. 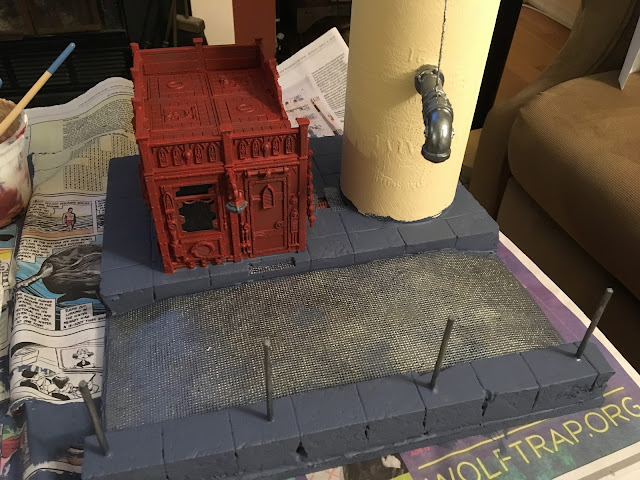 Painting started. I added another nail to the center top of the tube and tied string around the pipe to the tube. I solidified with with glue, then two layers of paint. It's still a bit loose, but also takes some more weight of the tube and looks more realistic. The blue, red, and yellow-cream colors are house paint. The silver is craft paint. 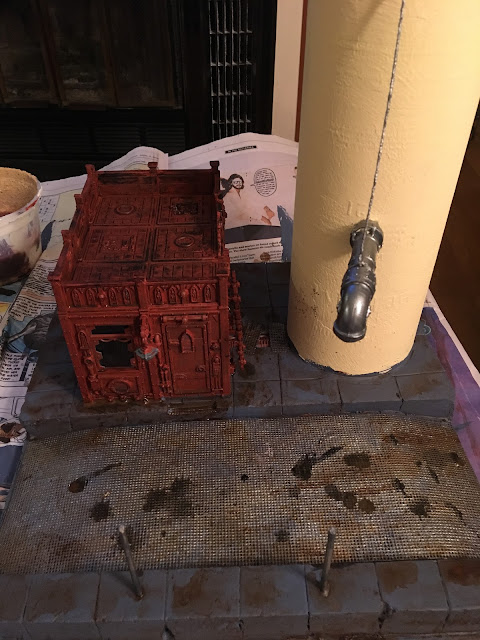 Washes added. The brown is literally paint water (with extra brown craft paint added) and washed over everything but the tower. Then I sploshed some over parts of the metal grill work. I then added more black to the washes, then dripped some down from about a foot up, letting gravity do the work. 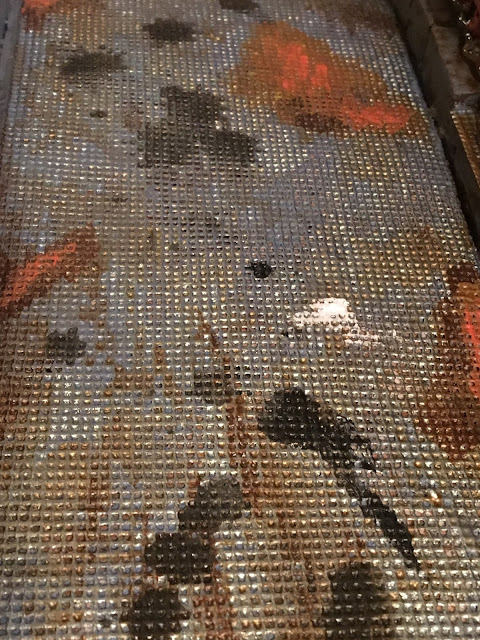 I wasn't happy with how rusted it didn't look, so I added more using a dark brown>lighter brown> mixed brown/orange > orange paint combination and applying it with a brush, then with a sponge brush. The white here is super glue, which I've seen in other tutorials but after trying it once didn't want to do it more. Use liquid, not gel, as I did (which fethed up a brush because I let it get attached in the water, grr). 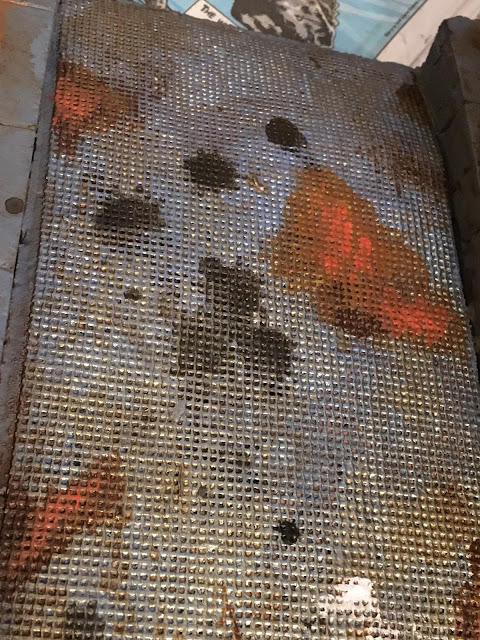 Another look at some damage/rust effects. The same effect was applied in places to the control station, but as I figured it was better maintained, I did it sparingly to window units and the roof. 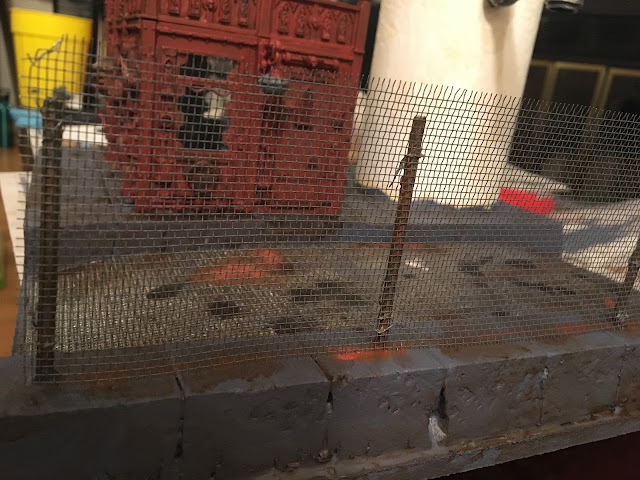 The fence also needed some more rust effects. I added the same effect to the bottom of the fence as, when it rusts, some falls to the ground to mix with rain water. The fence is window mesh, of which I now have enough to fence an entire board with plenty to spare. They are secured to the posts with extra bits of mesh (pulled from the top) and guided through, twisted to secure it then super glued in place. 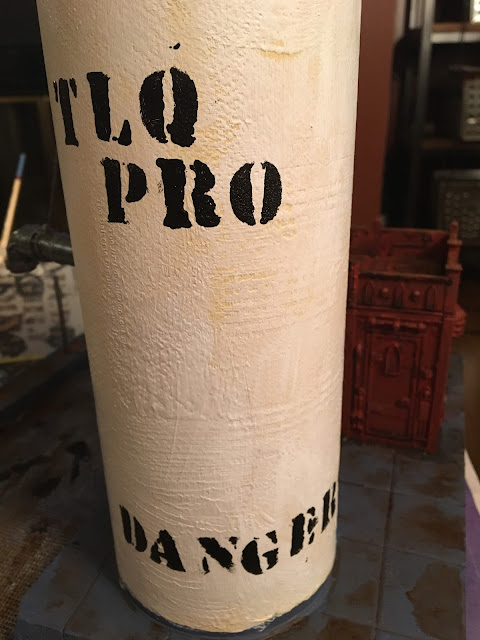 Adding some stencils to break up the large cream silo. It says TLQ Products (eventually). plus Danger! at the bottom. The hard part here is waiting and using a sponge brush since I don't have a functional airbrush to stencil more neatly. Anyone have good, quiet compressor advice? 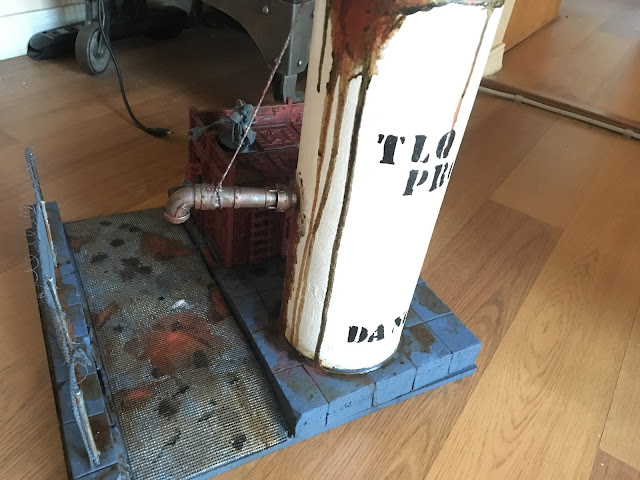 The mostly final product. This is what I entered into the competition. I added water damage to the silo at top (weak point) below the spigot (weak point), and along the seam of the silo (Weak point). Some people said I should do rivets along that point. I'm no where near patient enough to do that, and on a hobby budget of ZERO this month (teacher + saving for summer), so couldn't even go out and buy the hack that is nail art beads. Thousand Sons Sorcerer for reference. 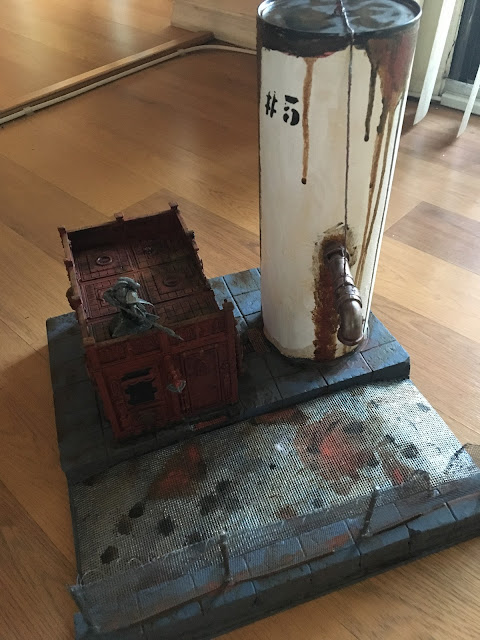 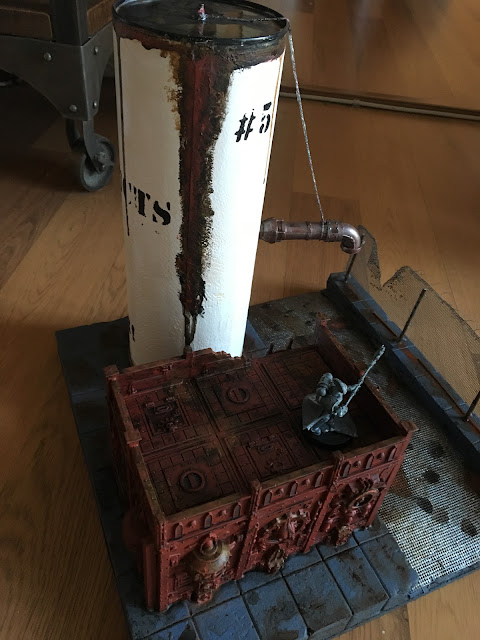 You can see the damage along the seam here, along with the cut to the fence. I also curled the top of the fencing back upon itself to ensure it wouldn't fray/stab people. You can see the wash added to the top as well. I'm actually quite happy with the final results. I'm going to add some posters with 'danger' and propaganda to some places, but it's playable and done.

Competition update: I lost the competition. It was close though! Maybe next time. Look forward to getting this onto the table top come Apocalypse day (the next time I'll be at the league).