Rise Of the Nids! 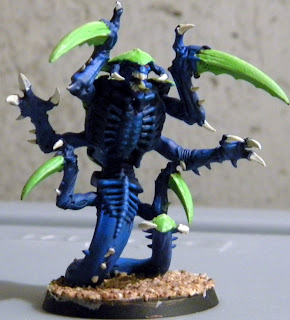 This weekend I had 2 battles which I brought out my battered and somewhat painted Nids.

Over all I was please with the lists performance.  I had enough threats on the table to make target priority a pain.  I Thought the Raveners did well but I want to see what 6 or more can do.  I think 3 is a bit fragile since 3 rockets can take out the squad.maybe a venomthrope with catalyst will help them survive any first turn assaination attempts.

The fly tryant did nothing the first game but wrecked face the second game.   I love getting iron arm for a power.  It really helped him stay alive throughout the game.

The first game I had 2 perils in the first turn while in the second game I had one.  The new psychic stuff is prety interesting.  I will bring this list back during the next league.  Hopefully it will do as well then as it did this weekend. On a side note I think I need more termagaunts :)