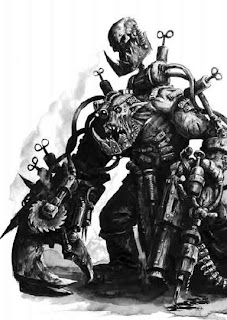 For this week, I have decided to try out the Mad Doc.  I think it will be fun with all my orks having a 5++. I am also going to try using battle wagons with 4 big shootas on them. I will see how they work out. Let's look at the list.

so the dok goes with the meganobs in one wagon and the mek goes with in the other with the 19 boys squad.  The other squad marches forward laying down a hail of bullets hoping to hit something.  the lootas try and shoot stuff from the backfield and the Dakkajets make trouble like no other.  I am worried that I don't have enough troops but I really don't expect the win.  I just want to have some fun shootin and choppin and Waaaaaaghhhhin all night long.


So what do you think?