Last week, I posted my list that I was going to be taking to the rogue trader tournament coming up this Sat at Fantasy Books and Games. After making sure I have the required books I noticed that the only 40k approved Mega Dread is the MEKA-Dread. I don't have that model and if I did the book says you can only take a Meka-dread if you have a mega dread in your army.  sigh :(

So I have decided to take a Necron force instead. lets take a look.

Since this is a rogue trader tournament I only want to bring painted models. With this list I have to finish painted my Doom Scythe  and a tomb Spyder by Sat.  Not to hard. I didnt add any wraiths since I only have 3 and only one of those is painted and it was a pain. I might work on them after I finish them after getting the Doom Scythe and Spyder.

I think I will add the lord with the immortals in the battlements to shoot at stuff and then the overlord goes with the other immortals with one cryptek while the stormlord has his 10 man squad of warriors and a cryptek.

I will have the spyders add to the scarabs while keeping near other guys to protect from psychic attacks.

I feel I will be tabled a bunch.  It is not a competitive list but it is what I have painted.  If anything I should have fun. Heck that is rule number 1 for me.

On a side note, Puppets War have a new model out that I want to buy.  The question is what would I use it as.  I was thinking that they could be a cryptek if I gave them a staff instead of the big gun arm.  Let me know what you think. 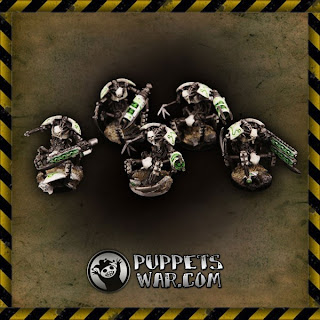 Have a happy Monday.